When I first started The Dan Plan back in April 10, 2010 I thought it was going to take four years to accomplish 10,000 hours of deliberate practice.  Shortly after commencing it was clear that the journey would take much longer (definition of Deliberate Practice being highly focussed over shorter periods of time, not long blocked practice) and that it would bring me to places, both externally and internally, I could not have imagined from the onset.  Now, half way through the determined goal of 10k hours I am trying to reflect on what this journey has come to mean to me and what I can potentially expect from the second half yet to come.

For a little retro action, here is a video from the very first day of The Dan Plan:

I had no clue what I was getting into and putting from one foot away from the hole was “golf” to me.  You can tell I was a newbie from the yellow jacket, blue jeans and running shoes.  That outfit quickly changed as I realized there was actually a type of uniform to this game, which still strikes me as a bit odd as I’ve never noticed how a collared shirt helps one golf

Learning about golf and proper attire I ran into all sorts of people/outfits from the more traditional: 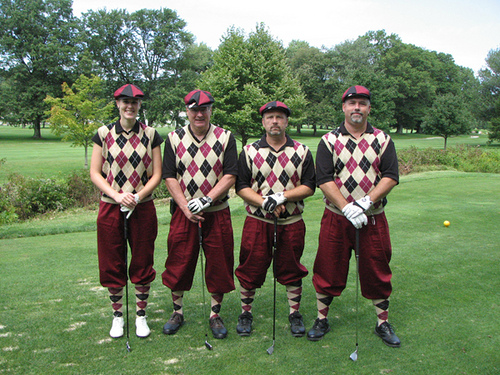 To the more modern man: 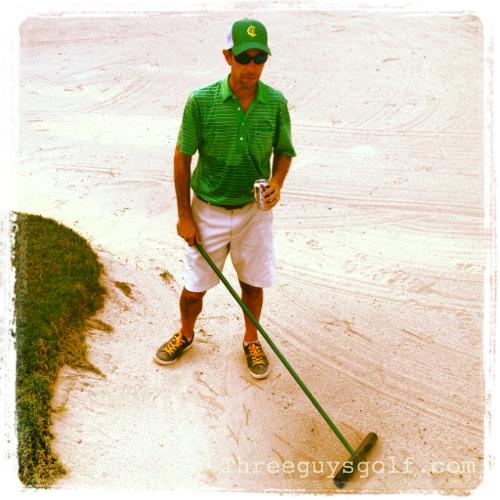 I knew there was a perfect compromise for me and I slowly worked my way from a rubber raincoat to wool sweaters then to the polyester shirts you see on Tour to finally finding some, in my mind, wearable cotton shirts that I have been wearing every day since.  In a way golf has changed how I look on a daily basis as I pretty much now don some form of non-denim pant and a collared shirt whereas 4 years ago it was jeans and a t-shirt unless I had to go to a funeral or a dinner with grandma.

Over the years the press started warming up to the journey.  The first major story that came out was written by Michael Kruse of the Tampa Bay Times.  It was a good read and he did a wonderful job reporting, even driving the 274 miles from Tampa to Tallahassee with me and staying overnight to attend a presentation I gave at Florida State University.  That story is here:  Tampa Bay Times

Since then it has been picked up by all sorts of media outlets from TV stations in China and Korea to blogs in Norway and magazines across the globe, CBS just ran a Sunday morning piece earlier this week.  Way more exposure than I had ever imagined and it has been an honor to hear all of the reactions from the story.  These have run the gambit from adulation to completely despising the idea.  Luckily we are all fortunate enough to have our own opinions and equally fortunate is the ability to appreciate or slough off the externalizations of others.

But, what have a learned so far?  That’s a tall order as so much happens in four years of a life.  Has it been a journey filled with inspiring times and conquered obstacles or is it becoming the regretful decision in life that I sought so hard to avoid in the first place?  It really just depends on which day you ask me, although for the vast majority of days it would definitely be the former.

Sometimes I can’t imagine doing anything else and I love this journey, but on a few occasions I have found it hard to muster up the drive to remain focussed.  That’s just what happens when you do something constantly for four years.  Life’s not a movie and emotions flow like the tide.  I think the lesson I have learned is to allow the bad times to pass as the better are always on the horizon and when the good moments are here remember to appreciate them.  Also, don’t forget how green your own grass is before you start looking out over those fences.  Some cliches are better than others.

What I have done the worst over the past four years is to attract and hold on to potential sponsors.  I never imagined how hard it was going to be to find some support for a project like this and am slowly coming to the conclusion that I will have to go about it on my own for the remaining four years.  When I began I wrote down that I would give it two years and if I had not found a way to make the project self-supported I would reconsider and redirect.  Then the two year mark hit and I was still enjoying it so I kept at it as to me the payoff was in the journey and freedom that comes along with following one’s heart/dreams.  Another two years has passed and I still agree with that sentiment, but as the funds deplete and the financial needs of this pursuit grow (for example tournament entry fees: to play in mini-tours can cost around $2,000 a week after entry, travel, room and board) it becomes harder to deny a creeping sense of looming financial needs.

I’ve paddled this canoe half way cross the sea so can figure out how to make it safely home on my own if need be.  I never intended this to make money and was perfectly comfortable sidestepping my career for a few years in order to do some human potential explorations.  That was when I thought it would be a four year project, though, and now that I am approaching 35 it’s hard to not worry about future finances, retirement, helping raise a family, health care, having a safe car and all sorts of other concerns that begin popping in one’s head when life’s conceptual longevity creep into the picture.  There is a big difference between 29 and 35, surprisingly so.

I still love and cherish my freedom and decision, don’t get me wrong, it’s just that there is a greater sense of future than there was at the beginning.  The thing about golf, too, is that it’s shockingly expensive.  But that’s enough about that, this should be a celebration of time spent, not a time to linger on the finances of the future.

Long story short is that I hope to be able to finish the entire 10,000 hours and will do what I need to do in order to make that happen.  Goals often require sacrifices and I was well aware of that when I began.

I have learned a lot about golf, quite a bit about what it takes to improve and that “plateaus” are just periods where more time and a fresh outlook is needed to surpass.  I have yet to see any specific or generalized reason why this goal of making it to the PGA Tour (or subsequently any specific goal) is not possible and I now firmly believe that anything is possible and that we have not yet begun to understand the limits of human potential.  It might be strange to use golf as an analogy for our capabilities, but I see it as a clear window into better understanding both mental and physical performance.

Speaking of those two types of performance, I see the second half of this pursuit becoming more about mental training than physical.

Over the past 5,000 hours I have spent the vast majority of my time learning how to physically swing a golf club and understanding the mechanics of that swing as well as the physics behind what makes a golf ball bend in the air.  It took a long time to get to the point where I had an efficient swing and that took up most of my training time.  I also spent some hours grasping the rules of the game and learning what it meant to play golf as well as how to score, but that was almost a side project during the first half.

I have noticed a lot of transition in my training and emphasis lately and it is evident that the emphasis from here on out is going to be more on the mental approach to the game.  For example, I have gotten to the point where I can work a ball well on the range with any club and hit my targets while doing so, but under the pressure of an actual match my skill level seems to, on occasions, diminish.  Learning how to perform in those situations and how to self-correct in the middle of an important round is tantamount to future success and will be the keys to moving forward.

That’s not to say I will stop focussing on mechanics nor will I not continue to try and increase my swing speed and accuracy, but just that there are crucially important aspects of getting to the next level that happen more internally than externally.  I always knew this would be both a physical and mental pursuit, but am just beginning to understand exactly how large a roll the mental aspects play in performance.

Today randomly happens to also be the 4 year anniversary of this pursuit.  A fitting day to be both half way and 4 years in.  And, the Masters start today.  To me that means my goal is to be playing in the Masters on the 10k finishing day which should be early April 2018.  Now that’s a target I can shoot for.

Thank you all for following along over these past four years.  The encouragement and support has been huge in keeping me focussed throughout each day and the fellowship of friends (either in person or via email) that has gathered along the way has easily been one of the best parts of this journey.  Here’s to another set of amazing years and unknown obstacles yet to be conquered.

To celebrate the day I played in Riverside’s Masters Day tournament.  I had no expectations heading into the round and saw it as a good position marker for the 5k to come.  I hit the ball well and despite the punched and sanded greens actually putted very well, shooting a 75 that landed me tied for 3rd out of the 88 entrants.  That score also put me in second place gross.  The low round of the day was a 73 shot by a plus two handicap golfer.  A 75 is a good sign of things to come and my lowest tournament round to date.

Also, part of the round was to pick a random pro playing in the Masters today and our rounds get paired together for a combined gross score.  I drew Phil Mickelson and proceeded to beat him by one stroke on the day.  Augusta is a much harder challenge and I didn’t play under the same pressure, but it still felt good to beat the pro I was paired with as he shot a 76 today.