Let me preface this post with a couple of things.  First off, I love my current Vokey Wedges and Titleist irons.  Secondly, I am not paid by any golf club manufacturer, nor am I paid by anyone, so I can have an open opinion about the effectiveness of gear and am up for trying different things along the way if they make sense for my game.  That said, I truly appreciate Titleist fitting me for gear and providing me with an awesome set of clubs that has allowed me to push my game forward.  I’m not looking to burn any bridges, but want to address a lingering concern.

Now that that’s clear, I want to talk about a hybrid situation I have had for the past 6 months.  Namely, I have not had any confidence in nor have I had positive results with the hybrid that I was fit for back in April.   The rest of my clubs seem to produce the shot that I apply on the ball, but for some reason the 19 degree hybrid that I was fit for in Oceanside earlier this Spring never felt right to me.  When I hit it right it was pretty deep, but looking at my stats I hit it well about 1 out of 5 times, which is a stat that has cost me many strokes over that time.

I have tried out about 5 different shafts in the 913 hybrid head and a few different weights in the head, but nothing seems to work with me and I finally hit wall yesterday during a round here in Portland, OR.  I pulled the hybrid 4 times and twice the ball went OB and the other two times I hit one long par 3′s green and the other shot punched through some trees but hooked hard right back into the trees.  That’s the problem:  statistically about 20 percent of the time the ball had a decent draw or fade on it and the other 80 percent it either had a huge hook or slice to it.

Back in the day, I remembered that my go-to club was always a 3-hybrid, so I decided to pull out an old one today to see if it was hybrids in general that I couldn’t hit or this one in particular.

Today, I played a round at Heron Lakes and hit the hybrid 4 times, once off a tee on a par 3 and three times on par 5s as approach shots.  Without any new special effort or golf swing technique, all 4 of those shots did what I thought they would do and either ended up on the green or in the fairway.  And, on the range before the round my shots were buttery ending up either with a baby draw or fade.

What I realized was that the Titleist hybrid’s club head was too light.  What I mean is that I couldn’t feel it during the swing so it has been hard to find square at impact.  Personally, I think this is because my shaft weight to club head is off, but I can’t figure out how to change that to make it a productive club.  The old hybrid, a 2011 Nike, has a heavier head and I understand where the club face is throughout the swing.  I’m sure there is a way to correct this, but for the meantime I am going to stick with my old club for short par 4s, long par 3s and approach shots on long par 5s.

But…  The old one only flies about 4 yards farther (personally I like to say further, but Country Club Eric constantly reminds me that that is not grammatically correct) than my Titleist AP2 4-iron.  It’s basically a redundant club and will need to be addressed soon, but having my current hybrid out of the bag creates a whole new level of confidence in 200 yard shots.  I just have a gap between 200 and the 240 yard 3-wood.

I suppose the point is that if you don’t have confidence in one of your sticks and you have worked hard on your swing then there comes a point where that piece of gear needs to be changed.  Between club heads and shafts there are a million options out there and there is one that fits us all.

I am going to head back to Oceanside for an update fitting at Titleist this Winter and figure out a better solution as I need a club that carries somewhere between my current 4-iron and my 3-wood.  In the meantime I’ll stick with a club that I can control and see how that helps the overall game.

On a side note.  I have been told by countless people to start a kickstarter campaign since day one, but have never had a good enough reason to launch this.  After that email from Bruce, though, I realize that this winter is a pivotal point in the project and with some added funds I could make it down to Palm Springs, train with my coach and practice alongside some inspiringly good golfers.  I have decided that it is about time to start that campaign and hope to get it off the ground in the next week or two.  Once it is live, please spread the word however you can.  I greatly appreciate it.

Some photos to end this piece.  First off my winter range setup for TrackMan use while in town:

And, the mythical double rainbow. The best thing about storms that actually pass through rather than sit on top of Portland for months at a time: 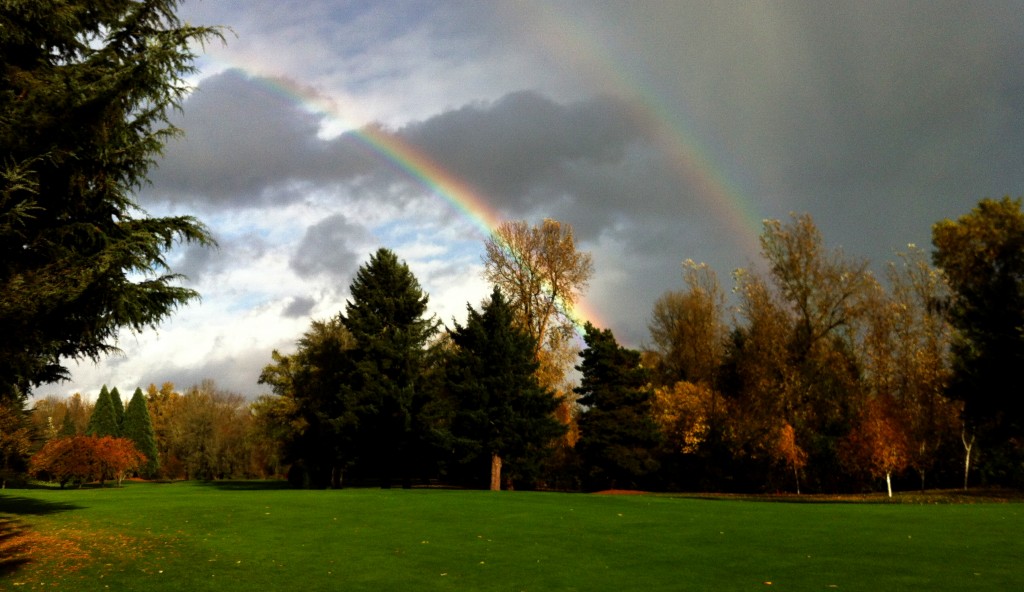 4 Responses to "A club of change. The fine details of golf club feel."