I wasn’t really in the mood to play a round yesterday and when I got a text about a tee time early in the morning I disregarded it for about an hour.  The time had just changed and I didn’t get to sleep especially early so the morning came a bit quicker than expected and I had been hitting a ton of balls through the week so a large part of me was screaming to either take a day off or at least to take it easy.

But, I was coerced by the texts to join my normal Sunday group out at Heron Lakes.  Showing up about 30 minutes early I hit enough balls to loosen up my back and then headed for the first tee.  I hit a decent drive there to the middle of the fairway leaving me a wedge to the hole.  Knocked it tight and dropped the 3-footer for bird.  You can’t birdie them all if you don’t birdie the first.

On the second hole my drive pulled hard right, but it was a par 5 so I laid up with a hybrid to 90 yards and then stuck my approach to about 9 inches.  I thought this one had a chance of going in.  The third hole was similar in that I hit my tee shot to exactly 90 yards and then landed the approach a few feet from the pin.  I made a little downhill slider putt for the third bird in a row.

Three birdies in a row is the most that I have ever made.  Walking up to the fourth hole I was aware of this fact, but tried to disregard it and just think about the shot at hand.  It was a par 3 with total water carry and I decided to club up and hit a knock-down shot instead of going for a full swing.  I executed it well and watched as the ball landed about a foot past the hole.  Tapped it in for the fourth birdie of the round and to start four under par.

This felt great.  No matter what the rest of the day held I had set a new personal record and now know that better golf is definitely possible.

The rest of the round was pretty solid through the 14th hole.  On the 15th I have a mental block on this 150 yard par 3 water carry for some reason and for the second time in a row hit a bad tee shot leaving the ball in the water.  I also hit a poor chip on 17 ending in a bogey and then pulled my tee shot on 18 into the water for a final bogey.  Not going to think much about the finishing holes outside of the fact that I need to drink more water, eat more food and stay focussed for a full 18.

After this we all played an additional 9 holes and I shot one over for those total.  That’s 4 over for 27 holes which is also a new personal record.  Very good things were happening and outside of a few holes of sliding backwards this is the type of golf that I want and should be playing right now.

Here is the scorecard: 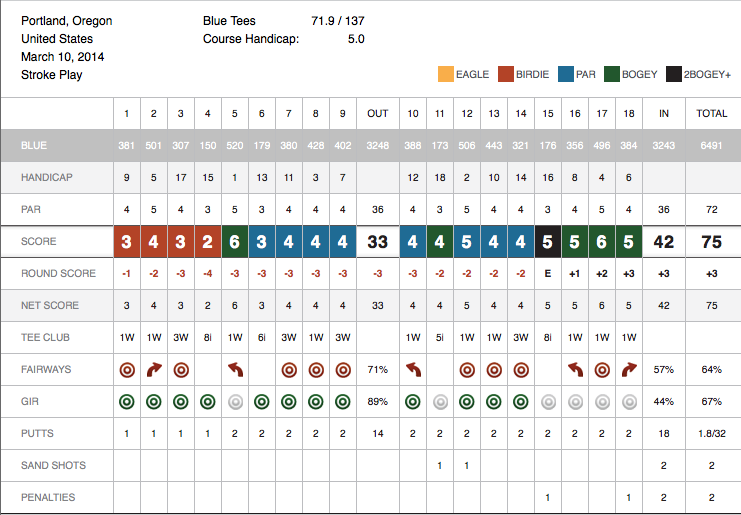 For the next couple of days I am heading out of town.  Today I will be playing a golf course in Salem, OR and then am going to go to Bend for Tuesday and Wednesday morning.

If anyone is in Bend and wants to tee it let me know.  Also, I have never played in central Oregon so if there are any recommendations of courses to play please tell me.  There are so many incredible golf facilities there, but if you could just play one what would it be?

8 Responses to "A new record and a short golf trip"