I’m usually not one to get overly excited by a test drive, but today I saw a new opportunity for growth in The Dan Plan and I must admit I’m excited about the possibilities.  After a couple of hours practicing out at Heron in the AM with the sun showing it’s shy winter face, 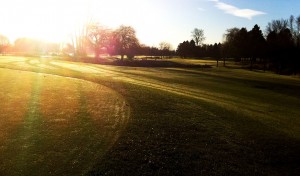 I headed over to Columbia Edgewater Country Club (CECC) to view the facilities there.  I thought I had been spoiled by the handful of courses that I had been practicing at thus far (and don’t get me wrong, the municipal courses around Portland are truly top notch), but I had no idea how nice it could be until I parked by the pitching area out at CECC.  With a view of Mt Hood in the distance, they have a huge area dedicated to just pitching/chipping: 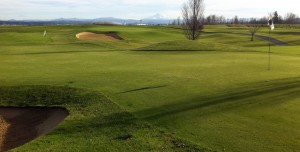 This is just what The Plan needs!  with an area like this, I can practice every different type of ball lie and from any distance that I would encounter in real play.  I gave it a whirl to make sure, and yep, it’s a perfect place to practice.  And, not only do they have a 100 Sq Yard chipping area, but there’s also a 9-hole par 3 golf course, known as The Mason Course:

This was just too tempting to pass up!  The longest hole is about 130 yards and seeing as I’ve been soooo good up until this point about not diverging from our plan of working away from the hole, I figured it wouldn’t hurt to play this one.  I’m not sure if I would consider this my first time playing a course during The Dan Plan or not, but I am sure I had a blast and am excited about learning and playing more down the road.  So, don’t tell my coach (I actually called him and confessed my sins of playing from further out than 30 yards.  He said to say my rosaries and all would be well in the golfing world) but off I went down the path of par 3 golf.  What a great path it was too! 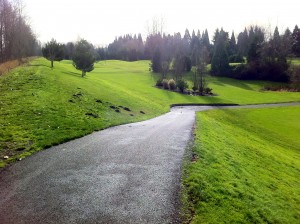 I didn’t expect much from a performance point of view, I was really just going to see what CECC had to offer, but of course kept score.  It will be another of the many benchmarks that I keep to continuously improve.  I had a few great shots, including a 45 foot uphill left-to-right breaking putt for a birdie on number 5, as well as this shot from 67 yards out the landed about 8 inches from the cup: 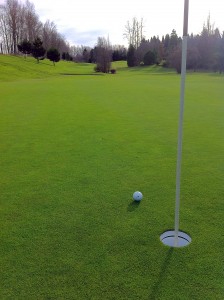 But, of course the ball didn’t always fly my way and I had a few slap shots mixed into the bag.  Overall, I shot a 33.  Not a very accomplished score, there’s definitely no letters heading to my mother’s house about this one, but in all honesty I’m happy with the score.  That’s 6 strokes over par for the course and seeing as I’ve NEVER hit a ball further than about 50 yards I’d say it was pretty good.  There were a few one putts and only one three putt.  Number nine has a HUGE hill and I ended up at the bottom of it.  I struck the ball pretty hard and it almost…  made it to the top, but right at the crest stopped and began tumbling back down, landing exactly where it started.  I couldn’t have done that in a million years if I tried, but made it on the second go.  It’s hard to see the flag at the top in the sky, but here was my view on number 9: 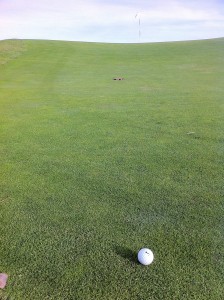 I was happy with everything I saw out at CECC, but before heading home I stopped by the pro shop to say hello to some of the guys working there and on the way I saw a bit of the real course, and again I was struck with excitement.  I know it will be quite some time before I can play a full 18 holes, but getting on the par 3 course definitely whetted my appetite.  Views like this don’t hurt things either: 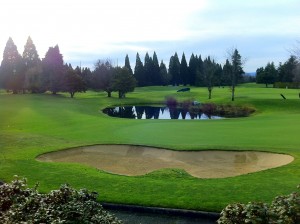 Long story short:  I think that The Dan Plan could accelerate its growth given the right facilities and I think CECC has exactly what a serious golfer in training needs.  I bid adieu to the course for now.  I can’t promise I won’t (love those double negatives) be thinking about playing that par 3 course, but for now I will continue my training elsewhere and perhaps one day soon there will be a chance to go back out there and break 30 on the Mason Course… 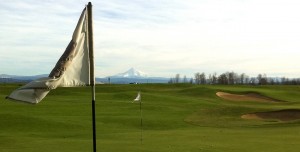