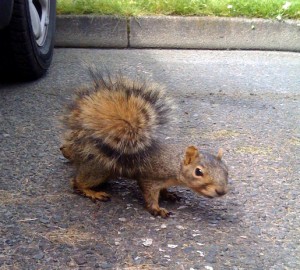 I met a new friend out on the greens.

Another week has come and gone and I must admit it was perhaps the most frustrating week of The Plan so far.  It was the first time that my expectations of my playing skills were really high enough to frustrate me when I made silly errors (which I make tons of.  I have been, after all, playing golf for only six weeks..).  And all week I felt like I could not get into a groove with the new putting stance that CS is having me do, too.  But, I ended the week with a few really good putts and a good round on the Pelz’ Putting Tutor and now I know I can have a nice and relaxing weekend with my brother before he heads back to Omaha on Sunday.  It’s important for me to end things well; if I had not, I’m afraid I would think about the negative aspects of this past week all weekend, which would have not aided in rest/recovery and more than likely lead to a frustrating start to next week!

By the end of the day today, I was finally feeling comfortable with my new swing and understand the importance of lining up with my body completely straight and in a “neutral” position. It took about a full week to really get behind the new stance, a bit longer than before, but good to know because there will be a lot of adjustments and new stances over the next four years, so as long as I’m aware of an adjustment period and keep my mind open, I should (hopefully) remain as easy going as possible and keep the frustration to a minimum.

On a side note, I think it’s about time for me to do a “bootcamp” of sorts.  Now that it’s summer and there will be days, and maybe even a full week here or there, of sun, I think it would be good to immerse myself in my training to an extreme level for a few days.  I do as much as it feels like I can right now, but I want to push that envelope more and see how many hours of training I’m really capable of on any given day.  Marijke is going to go visit family in San Francisco soon, which will be a good time for the “bootcamp” to take place.  The goal would be to get in ten hours of practice a day (that’s solely time spent golfing, not including gym time, commuting, eating, breaks, etc. pure time spent actually standing over the ball).

For now, off to climb Dog Mountain with Marijke and my brother.  It’s a beautiful day here in the Pacific Northwest!