Over the next week, or perhaps two, the high temperatures look like they are barely going to creep north of freezing, which means that frost delays will last until twilight golf time and the ever-so-cautious Riverside will be playing “temporary greens.”  That means they shut the real greens down and cut a large hole in the fairway where you try to putt, á la 1830s Scotland style, without hitting too many craters or grass chunks along the way.

I suppose that makes sense when you have to ice-pick your range balls free: 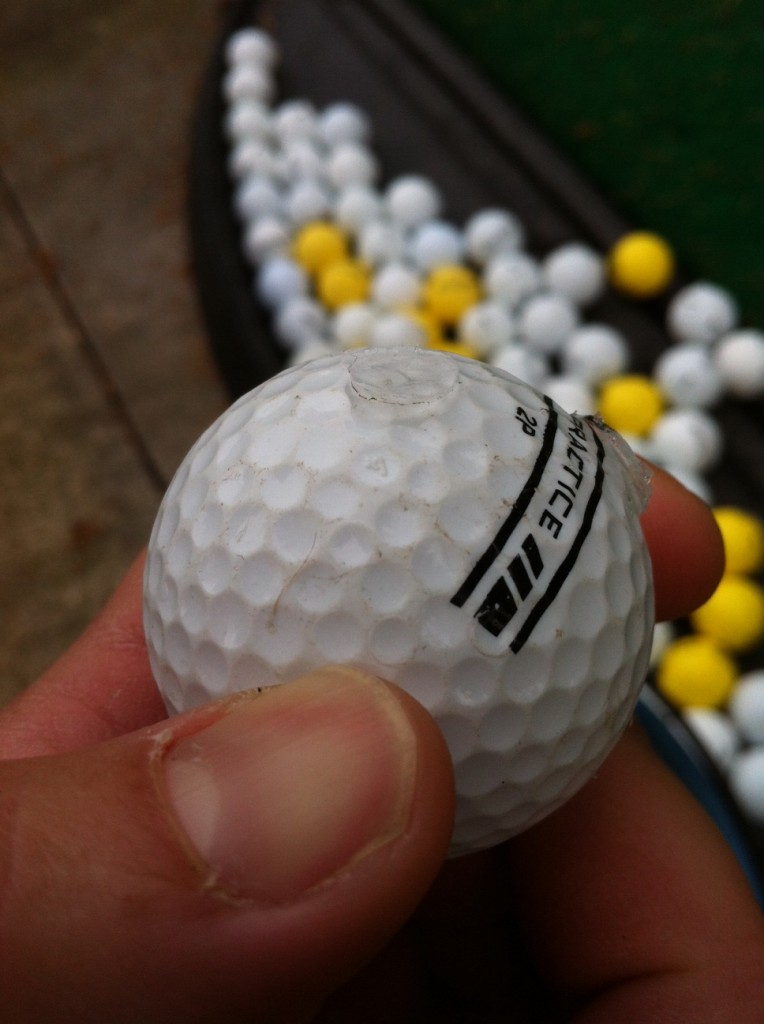 At first I was a bit dismayed by this as I was on a scoring streak, but then I realized that this is the perfect opportunity to step back and spend a couple of weeks working on my driver and hitting the gym.  I am still nowhere near where I want to be with the driver.

It’s pretty blatantly obvious when I do a TrackMan combine that I need to work on that stick.  Yesterday my total score was a 70.7, which isn’t bad, but without the driver part my score is about a 74, which doesn’t seem like much, but it’s a huge difference.  And, my driver score was 41, which is lower than what they say the average high handicap golfer should score.

To translate, I shoot just under the average college golfer with all distances except the driver, which is too erratic both on the range and course.  With that stick I was around where a 24-30 handicap golfer should score.

I have known this for a while and Bruce was getting me into the right positions and we were making progress, but I think that I spent a little too much time on the course lately and have reverted to some old habits.

Knowing that, I had a friend come help me yesterday who is familiar with my swing (and extremely knowledgeable about the golf swing in general) as well as what Bruce was wanting me to work on.  We shot some video and right off the bat he noticed that I had gone back to a handsy takeaway which was producing my old flat swing, which in turn was causing me to attack the ball way inside out so I was having to snap the face shut at impact in order to not hit a huge push slice.   It was a swing that produces a two-way miss:  I either snapped the face shut too much and hooked it or left it too open and pushed it.

Here is the before video:

We worked for a while on some takeaway drills and finding that one-piece move again that Bruce had me doing and then talked about how important it is to not play for a while and just work on getting this stick on plane.

When I got it back on plane it was so much easier to go after the ball and produced a great ball flight.  I was getting a couple more mph right away and by this time it was about 35 degrees out, so once the club is on plane and it’s warm enough to feel the fingers I think good things will come of this winter “break” from playing.

Here is after.  It’s perhaps hard to see in real time, but my arm angle has gone from 26 degrees to 40 at the top of the swing:

I’ll be on the course, for sure, but only to focus on the priority at hand which is to solidify this driver change before visiting Bruce in the desert and getting an earful from him about how it takes me longer to make a change than one of his 8-year-old students

I also talked with Goal Guru Stuart yesterday and he says that I need to do something transformative with my driving because I was not improving that club at the rate we had decided upon.  I hope that stopping in my tracks and grinding away at that one club will produce the transformative change that I need to make happen.  Now is the time and as long as the roads are open I will be up at the range grinding away.  Just have to remember to wear as many layers as possible..

6 Responses to "An interim golf coach, new driver videos and some freezing temperatures"