I think a good analogy for my golfing performance on Monday at Bandon Dunes would be to compare it to someone who wanted to become the world’s best mathematician and after a year of intense training someone asked you to multiple 3 and 6; you gave it a day of deliberation and you came back with 17.3.  It’s in the general neighborhood, but in all honesty nowhere close to where you need to be.  Along that line, I’m unequivocally moving in the right direction, but am coming away from a humbling experience at a new and different style course.  Long story short, putting was my weak link.  It’s what is supposed to be my strength, but I was ill prepared for the greens of Bandon Dunes..

This past weekend I was invited down to Bandon Dunes to play some golf with Steven Levitt of Freakonomics fame.  It was a last minute style trip, but I was more than happy to go down there and have a celebration round of sorts.  As it turned out, we had scheduled my first ever driver lesson for Sunday, so I had the two-hour lesson and then jumped in the car for the 5-hour drive down to Bandon.

To be fair, I did cheat and play a round of golf with the driver before the Sunday lesson, but still, it was a completely new club and I was excited and nervous to take it out on the precarious fairways of Bandon Dunes.

I met Steven late Sunday night and we talked for a while about golf, my project and a handful of other topics before calling it a night for a 5:30 wake up call for breakfast and 36 holes of golf.

The facilities are amazing down there.  Here’s a little video of the driving range and putting areas:

After warming up it was to the links.  We played Pacific and then Bandon in the afternoon.  There are four courses down there and a new par 3 opening soon, so I hope to make it back one day to play everything they have to offer, but this trip was an incredible way to celebrate finally putting the driver in the bag.  I now have 8 clubs, but in a way they are enough to play any course and compete with any golfer.  I have a handicap and driver through putter, so bring it on.

Optimism abounded when we teed off and the course was unlike anything I had ever seen before.  It’s true links style with huge rolling fairways and hidden pot bunkers.  You could hardly ever see where you needed to hit the ball and had to rely on your caddy for the correct information (that’s another tidbit, it was the first time I ever had a caddy, which was a learning experience in itself as to what to listen to and what to go on your gut instincts).  Most of the fairways looked like this:

That’s one of the guys who joined Steven and I on the morning round, a fellow from Canada who had played 6 rounds of golf in the past three days.  Needless to say he was picking up some long missed putts by this point, but was still in good spirits and making golf shots.

Getting to the green wasn’t really a problem, actually.  On the first course, Pacific, I hit 10 greens in regulation which is by far a record of mine (the driver definitely helped this); but then had 45 putts which is also a record, just not one in the right direction.

It was a humbling experience to say the least.  You could knock the ball on the green exactly where you were aiming but they were so firm that the ball would roll out 60 feet down a double breaking hill.  The only way to pace it was by judging the pace of the previous green, but I swear every green had a drastically different pace so you would try and hit a downhill tap putt and it would either roll 20 feet or 20 yards.

Looking back at the round, putting was by far my weakest link and the longer the club the stronger my game.

As far as putting goes, I was completely unprepared for this challenge and it makes me think that the first 5 months of my training routine was wrong.  I spent 5 months just on putting greens “learning” to putt, but the only thing I really learned was how to roll a ball on one specific type of grass and on very specific breaking greens that after a week or so I knew the break.  So, I didn’t learn how to putt in the sense that you need to know how to putt in a true competition.

Right when I left Bandon I wanted to write a blog about how I thought the first year of my training routine was done wrong.  I think that because of my complete lack of knowledge of the game of golf, when I began I didn’t know what I was practicing and I was only gaining specific knowledge of limited styles of short course work.  And because of this approach, I’m good at putting on the bent grass that grows in NE Portland.  Last time I checked there weren’t many majors in that neck of the woods, so are the hours that I put in translate-able into the larger game of golf?  Perhaps, perhaps not.  I did, though, feel ill prepared for this course and if I could do the first year of training over I wouldn’t do it the same way.  BUT..  And this is a big but, I realized that it doesn’t do any good to regret the past and the only thing you can do is look forward from here on; think about what you can do down the line, not what you didn’t do in the past.  I want to share that I think way too much time in my routine was spent on putting and chipping when I didn’t fully realize what I was trying to accomplish, but I am not dwelling on this because I know now a lot more about where I need to go and what I need to do and that’s what I’m thinking about; not what has happened in the past but what I can do in the future.  That is the important place to put your thoughts and put your mind.

I’d love to thank Steven.  It was an incredible trip and I learned a lot.  Here’s a picture of the two of us on the front side of the Bandon course:  (of course I get one pic and decide to close my eyes for it)

He’s a great golfer and an even better person.  I look forward to many rounds down the road.

A couple more images from the day: 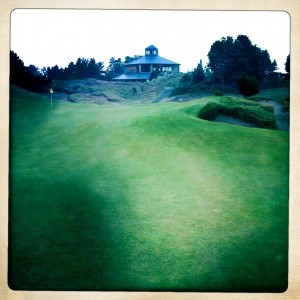 13 Responses to "Back to the drawing board?"