This feels great!  For the first time in my life I played a round of golf under par.  It was an unexpected treat and I feel ecstatic and, in a way, a bit relieved for finally crossing that threshold.  The more I think about it the more I realize that this is a pretty huge milestone and in a way much bigger than passing the 5,000 hour mark last week.  It seems like just yesterday that I broke 80 for the first time.  In actuality, that happened on April 23, 2012 and almost exactly two years later I bested that record round by 9 strokes and broke par by two strokes.

I have been under par deep into rounds (3 under for 14 holes, 2 under after 15, etc) but had yet to manage to bring it all the way home; until today, that is.  I felt the wheels come off a bit when I three-putted on the 16th hole for a bogey, but got it back in gear and finished strong shooting a 70 on a par 72 course.

The course was Heron Lakes’ Greenback track which was fitting as it was the first course I stepped a foot on during this journey and Heron is where I began my golfing practice 4 years ago. I also got to play with some of my golf friends who I have known from the beginning and then celebrate afterwords with a bunch of regulars who were sticking around to watch the basketball playoffs.  And, my first swing coach, Christopher, happened to be on the putting green when I finished so I got to share the round with him and catch up on everything he has been doing in the past 1.5 years since we last crossed paths. 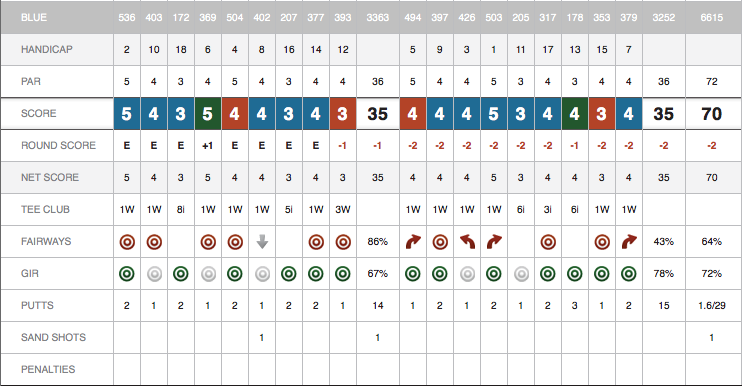 It was a day where ball striking was pretty good, chipping was on when needed and I was putting well.  All of these aspects added up to the difference between shooting today’s 70 and a much more commonplace (for my current game) 76.  That said, there are always shots that didn’t quite go in and I had a handful of near misses to go with what did go well.

Here is how it breaks down:

1. Driver in the fairway and laid up short of some fairway bunkers with a hybrid.  I had 110 remaining and hit a gripped up 50 degree wedge to about 15 feet.  The putt was tracking the hole the entire way, but veered off an inch before the cup to be tapped in for a par.

2. Pushed the driver but it ended up in the middle of the fairway, albeit it pretty short.  I had 168 to the pin and hit a 6-iron into a slight breeze but caught it fat and the ball came up just short of the green.  Chipped it up with a wedge and made a 4 footer for par.

3. Hit an 8-iron to this par 3 which was playing to a short pin about 155 yards from the tee box.  It landed pin high but about 20 feet to the right of the pin.  Made a good putt that was tracking just like on the first hole and veered off at the end again.  I realized I need to start putting a bit more pace on putts and not rely on them dying in the hole as if the cup isn’t perfect it sometimes loses track at the end.  Tapped in for par.

4. Hit the driver and was trying to draw it from the left back to the fairway over, but the shot went pretty much dead straight and smacked into a tree hard.  It kicked back out to the fairway and was 143 yards to the pin but behind a medium sized tree.  I hit a 9-iron to get it up and over the tree but caught it fat like on the second hole (didn’t warm up on the range so was finding my swing on the course) and it came down 50 yards short.  Pitched up with a 58 degree and it landed but bounced through the green as it was coming in from the rough.  Chipped back on and made an 8 footer to save bogey.

5. Hit a good drive on this 500 yard par 5 then hit my 3-hybrid from 225 yards out and the ball landed pin high.  I had a long eagle putt, perhaps 40 feet, and missed it by a foot then knocked in the birdie putt.

6. Crazy hole.  Tried to hit a high draw drive over the fairway bunkers but closed the face and hooked it hard. The ball hit a tree solidly and shot back almost all the way to the red tees.  I had 230 yards to the middle of the green but it was slightly with the wind so hit the 3 hybrid which came down just short of the green but plugged into the face of a green side bunker.  Got my sand wedge on it well and popped the ball out to about 6 feet from the hole and made the par putt.

8. Drove it through some trees and back out to the fairway and had 115 yards to the pin.  Hit a 50 degree wedge a bit short and two-putted for par.

At the turn we switched things up. On the front it was Eric, Brian and I playing in a 3-man skins game and then the assistant pro Nick joined up with us on the 7th hole so at the turn we needed to play a different game.  We decided to play a team game on the back and it took about a full hole to figure out what pops each person got.  We ranged from a plus 1 handicap to a 7.  It didn’t really matter though as we were all trying to just play good golf.

10. Pulled the drive low and down the right side fairly short.  Hit a 7-iron to try and get back out to the fairway and in scoring range and pulled that a bit too.  Had 124 remaining so hit a full 50 degree wedge pin high but a bit left.  Made a 15 footer for birdie.

11. Hit a good drive down the middle.  Had 118 left so hit a 50 degree a bit easy and was hoping it would land and release towards the hole but it checked up short.  Made a great putt that I thought was going to drop but it veered off at the last second again.  Tapped in for par.

12. Pushed the drive slight right into the rough and then had to hit a hard fade 7-iron around some trees to the green.  Got a hold of it well and it went long over the green.  Chipped back on and then made a 7 footer for par.

13. Pulled the drive low and short into the rough.  Laid up before some water with a hybrid as it was 300 to the stick and I didn’t have a club that could carry that far.  Had 100 remaining and  hit a half 50 degree that landed and spun back some.  Another good putt right at the hole turned at the last second and I then tapped in for par.

14. This hole can be a round changer for the worse if you are not too careful.  It was playing about 190 today and the green is protected by bunkers with water down the left side.  I hit a 6-iron as it was down wind and I would rather be a little short than long and the ball landed a few feet to the right of the green in the rough.  Chipped up to about 3 feet and made the par.

15. Shorter par 4 with water down the entire left side.  Hit a hybrid to 110 yards and then hit a 50 degree close to the pin, but it spun back about 10 feet.  Another near miss then tap in par putting scenario.

16. Water carry par 3 that was playing 162 yards today.  The pin was at the very front of the green just 4 yards from the water so you couldn’t be under the hole without serious threats to a water bound ball. I hit a 6-iron into the wind to be safe and landed about 25 feet past the hole.  The green sloped away from me all the way to the hole and then to the water and I let that get into my head leaving the ball about 5 feet short.  I took the next putt a little too lightly and just missed it leading to a 3-putt bogey.

After that putt I had a flashback to past rounds where I was under par so deep just to let it slip through my fingers.  Instead of playing “defensive” golf and trying to par out I decided to keep playing my game, which tends to be more aggressive, and stay focussed on aiming for birdies.

17. Hit a drive that was a nice draw but a bit low and it actually landed in a fairway bunker but then got a lucky hop and bounced through landing in the rough with a wide open shot at the green.  I had a downhill lie about 96 yards to the pin and knew it would come out pretty hot so hit a punch 54 degree. The result was nice with the ball ending up about 6 feet above the hole.  Made a good putt knocking in the birdie.

I was really happy about that and despite how much I had been trying to not focus on score through the round I knew that I was under par going into 18.  The best I had previously been was one over par at that point, but today I knew that I was two under and all I needed to do was double bogey or better to shoot par for the first time.  That didn’t mean it was any easier to hit a relaxed driver or approach shot, though, and even after sticking the green in 2 I was pretty nervous standing over a long putt.

18.  Just wanted to make good contact and finish strong, but got a little quick and pulled the drive some.  I had a clear shot to the pin but it was tucked behind a bunker some 150 yards from where I stood.  I pulled an 8 and was aiming to get close to the stick, but it came out of the rough hot and landed on the back of the green about 40 feet from the hole.  I wanted a birdie for a 69, but also at this point wanted to make sure I at most 2 putted.  Hit it and came up about 4 feet short, then took my time and made a good par putt.

That’s it, shot a 70!  Looking back I made a couple good saves and putted well, but also had plenty of opportunities to go lower.  I could have shot a 65 today and I could have just as easily shot a 75.  That’s the way this sport is and today I landed solidly under par with what did actually happen.  Who knows what the future holds, but just two years ago I barely broke 80 for the first time ever.  Hard to say where this path will be taking me over the next two years or the two that will follow that.  Whatever happens it’s going to be pretty darn exciting.

ps.  Thank you Schuyler and Richard for the donations based on this occasion.  Truly appreciated!

40 Responses to "BAM!! Shot under par for the first time!"