Never thought I’d say this, but today I was bumped off of CNN International by Muammar Gaddafi.  Seeing as the dictator was killed this afternoon, the story that was slated to run on The Dan Plan got postponed to tomorrow (tentatively scheduled as long of no other autocrat worldwide finds an untimely end).  Very understandable.

I had forgotten to mention that the piece was running, so now I can at least give a heads up for anyone not in America, as that version of CNN plays elsewhere.  The show is: CNN International Connect the World with Becky Anderson and it should run tomorrow, Friday, at 4 pm EST (9pm London time).  If anyone is out there that can tune in let me know how it goes.

Today I met with Coach Christopher and we talked a lot about why I’ve been getting a case of the hosel rockets lately.  No matter where I start the club or how fast I swing, I can hit the neck of the club every single time.  For those of you who don’t golf, this isn’t a good thing..  What we’ve known for a while now is that I actually over-rotate and this is what is causing the miss-hits.  Without getting too technical about it, the issue is that my body is getting well in front of my hands so when I hit the ball my shoulders are in front of the ball and the club is going from the inside outwards.

This is not a good thing, but it’s not a terrible place to be.  A year ago, before I ever swung a club, if you told me that my issue was too much rotation I would have been a bit surprised.  Having never played golf in my first 30 years of life, a lot of people thought range of motion would be a problem that I would encounter along the way; but luckily, I have plenty of flexibility and now I actually have to practice limiting my rotation.

The trick to this:  stave off frustration and allow myself once again to really suck on the range.  Not worry about where the ball is going right now, but think just about how the body is moving.  And, do it in super slow motion.  It helps to get a feel for the new swing if I close my eyes and do a full swing that takes about 15 seconds.  Looks a bit strange out there, but it works for me.

On a random note, this happened twice yesterday.  What are the odds? 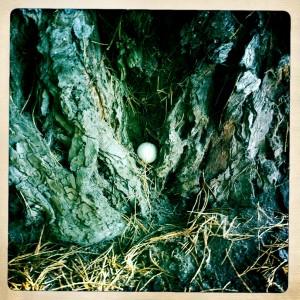 And, it’s officially fall out here, the leaves and trees are quite stunning.  This is the entrance to the third hole at Columbia Edgewater: 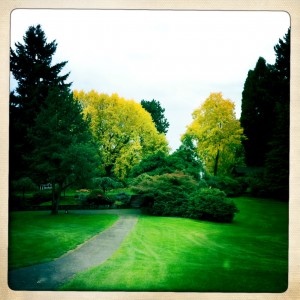 9 Responses to "Bumped by Gaddafi"