The talk was over and the dinner with Rudy was finished, it was time to head back to the hotel to try and get some shut-eye before a Thursday early morning round.

Time change can be a pain when you only travel for a couple of days and trying to fall to sleep Wednesday night at 11pm (9pm Pacific time) was not going to happen easily.  My mind was wound up from the events of the day, so instead of lying in the dark I decided to read for a while.  Around 1am I finally fell asleep and waking up at 6am I realized that golfing in different time zones and learning how to sleep well no matter where you are in the world is another aspect to work on for the future.  Getting an appropriate amount of sleep before an important round is a crucial part of preparation.

On this day, though, there wasn’t a career-changing round on the table or even a tourney round, but a fun 18 with Freakonomics’ Steven Levitt and his friend Brian.  The last time I played with Steve was November, 2011 at Bandon Dunes, which happened to be the first round I ever played with a driver. (for more on that, check out:  http://thedanplan.com/blog/?p=989   I was excited to see how he had changed as a golfer and to hear what he thought of my progress over the past 11 months.

We teed it up at Beverly Country Club just south of Chicago on a beautiful, yet frigid, Fall morning: 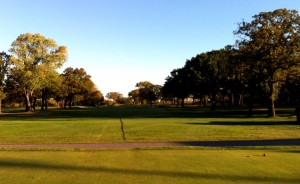 I hadn’t played in weather this cold in about a year.  It was a reminder that winter is just around the corner and it’s time to get the warm gear out of the closet.

The greens had been punched the previous day, so putting wasn’t exactly a precise science (and in turn, nobody kept score, although you always know how you played regardless of writing down a number for every hole.) but from tee to green the course played as it does every day of the year.  It was a fun track and each of us had some good holes and off holes, although there was just one birdie on the day, perhaps due to bumpy missed short putts on a handful of occasions by each of us.

I was quite impressed by Steve’s swing changes since last year.  He seemed like a completely different golfer and you could see how much work he had been putting in.  I believe he is about a 2 handicap, coming down from around a 4 last year and I could tell from watching him that he was on the verge of bringing that down even lower.  He loves the game and it was a pleasure to play with him once again.

I didn’t get any shots of Steve swinging, but I did grab one of Brian hitting an approach shot on a particularly aesthetic par 3, ball and all:

It was quite the course and I would love to come back and play it again when the greens are rolling quickly.

Alas, my quick trip to Chicago was coming to a close.  The talk went well and the round was fun, it was time to head to the airport and travel back across the Rockies to Portland.  When I left my home it was sunny and highs in the 70s every day; it had been an incredible Summer and Fall.  Returning, though, I realized that winter had hit and the rains had finally returned.  I went straight from the airport to Columbia Edgewater and found it just how I left it, but with a lot less people on the rainy range/putting green: 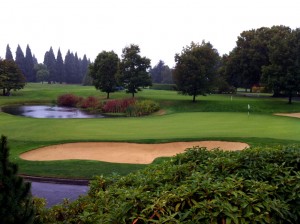 Rain or shine, Columbia Edgewater is still beautiful and the best practice facilities I have ever been to.  To some, this time of year is when the clubs get shelved for a few months.  For me, the course becomes my playground.  Throughout the winter the rains scare a lot of people away and there are times when you can have the entire place to yourself.  It’s perfect for on-course practice and I’m really looking forward to taking advantage of this.