For the first time, I played a regulation 18 hole course from the white tees.  And, I had such a good learning experience that I did it again in the afternoon.

I met three other guys for a 6:15 tee time yesterday at Heron Lakes.  That’s a bit earlier than I like to rise, but figured it was a good excuse to get started early so jumped on the opportunity.  Plus, it was pretty amazing out with the sun rising over the course: 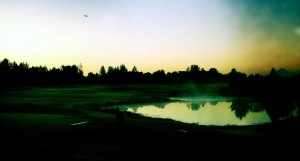 The round started off on the right foot, I shot par on the first hole, and was fairly consistent throughout.  I didn’t get any other pars, but pretty much played bogey golf for the rest of the morning.  There were a couple of tough spells where I managed to find water and extremely muddy sand bunkers which both added strokes and plenty of crisply hit 6 and 8-irons to keep the confidence level up.  In the end, I shot a 97.  I’m not concerned or proud of this number, but it is a good benchmark as my “first round.”

We finished by 9:30 and three of us decided to book a tee time for 2:00PM.  Not sure how they can play two rounds of golf on a Wednesday, but I’ll take the competition as both of them are good players with single digit handicaps.  You can learn a lot about course management playing with an experienced player without even talking, just watch where they hit their ball and how they try and play the holes out.

In the afternoon, I was on top of my game.  I felt great despite having woken up so early and was ready to strike some balls.  In the morning, my biggest realization was of my ball flight path.  All of the well-struck balls were drawing about 5-10 yards, so if I aimed straight at a target I was ending up 10 yards to the right (I’m a lefty) with draw spin.  However, if I actually aim to the left like you’re supposed to when hitting a draw I could end up pretty close to the target.  In the afternoon, I took this into account and was starting to get really close to my targets from 160-170 yards out.  This is awesome.

The round was going exceptionally well at first.  I made the turn at 5 over 41 and figured I could keep it up for the rest of the day, but hit a bit of trouble on the back nine.  On one par 5 in particular, I managed to pull a Tin Cup and drop three balls in the water.  It was difficult to see the 9 on the scorecard after so much good play, but it will serve as a good reminder that sometimes it is best to lay up and have a chance at par rather than stretching your limits for a potential birdie.  Lots of lessons there, you have to know when to take your medicine.  So, I had a little stretch of quad-bogey, bogey, double, double which killed the momentum, but I did birdie the par 4 17th which was icing on the cake that was yesterday.  I came in with a 90 for my second round.  A new benchmark already.  I can see the 80s around the corner and I’ll be excited to join them soon.

I’m starting to love this 6-iron.

A couple more images from the day: 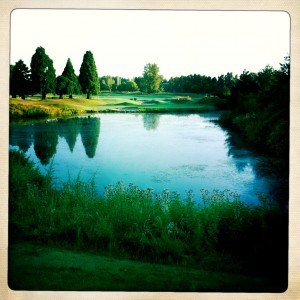 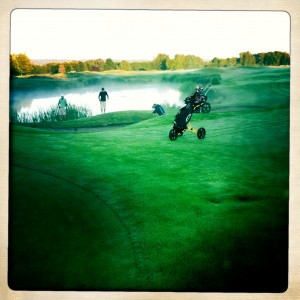 12 Responses to "Early mornin’ and a first"