I was out for the count both Friday and Saturday and then started getting my feet wet again on Sunday.  Whatever I had took more out of me than I thought, though, as I could only realistically play about 12 holes on Sunday and the rest was basically walking the course and making a couple of swings.  It’s not like me to have limited energy and I’m ready to be back to 100 percent.

The next day I had been invited to play a track I’ve never teed it on so had to make sure the requisite energy stores were replenished enough to last all 18 holes.  It was a hilly course on the side of a small mountain (or large mound might be more accurate) out in Gresham Oregon called Persimmon.  The track was an interesting course built, I think, mostly for some amazing views: 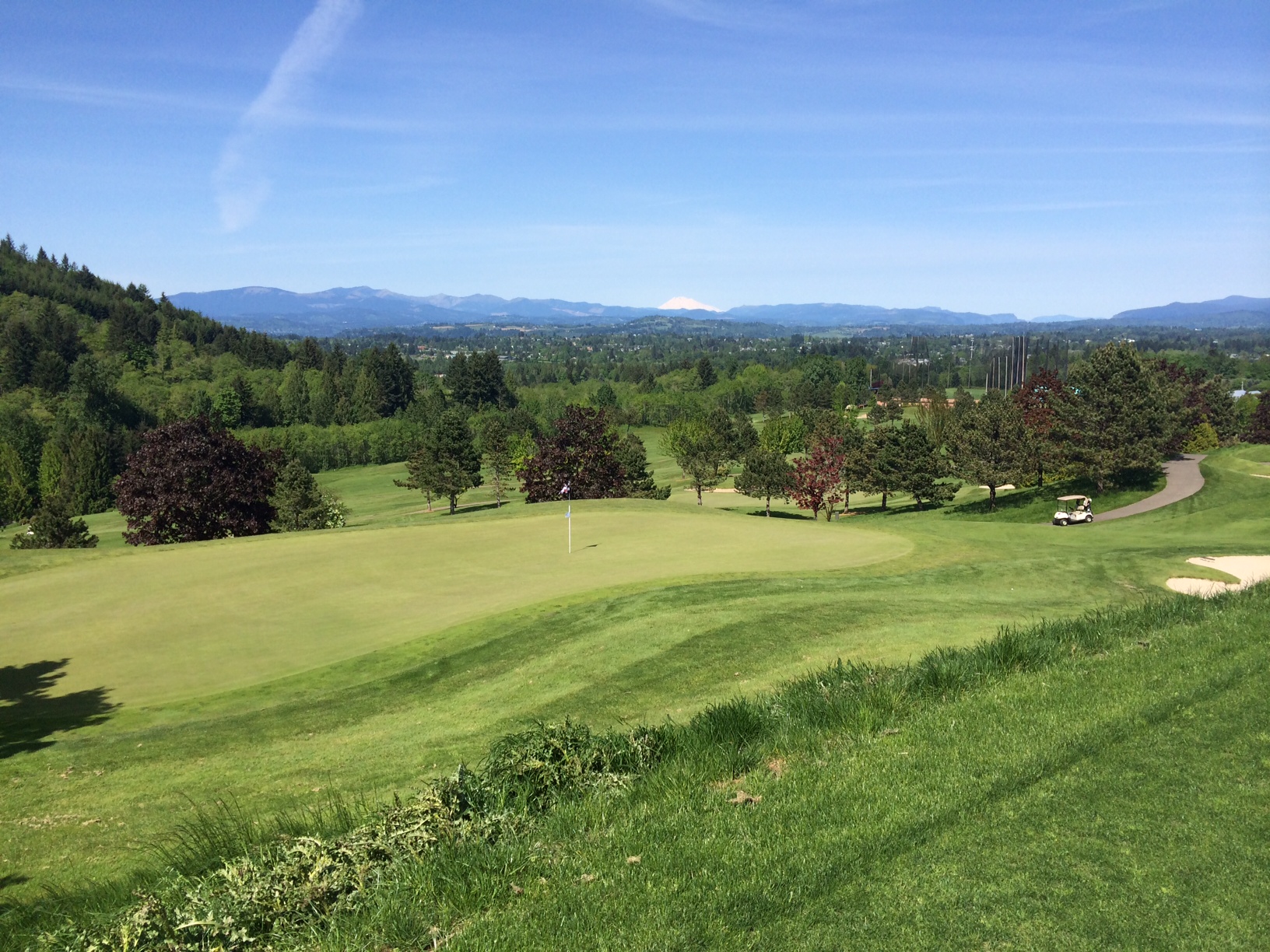 It’s hard to see, but that’s Mt Adams in the background.  Mt St. Helens and Mt Hood were also visible making it quite the scene in person.  All of them were much clearer through the human eye than through the wide-angle lens on my phone.

Apparently, though, being on an exposed hillside on an extra windy day makes for some interesting shots in golf.  We had about a two-club wind and the guy who invited me said it was the windiest he had ever played the course.  It was still fun and despite a hilly 18 hole walk I managed to keep my strength through the day and shot a decent score considering two shots I hit that were exactly what I thought I wanted to do ended up blowing long OB in the wind.  It’s tough enough to play a new course for the first time, add some wind…

The next day I headed out to Stone Creek to play a practice round before the Oregon Am qualifier come up on June 3rd.  I registered to play in that qualifier but have only played at Stone Creek once so wanted to refresh my memory on the layout and the how the greens broke.  Unfortunately the greens were recovering from being punched and they had top dressed, but I still got a good look at where to hit tee shots and approaches on each hole and what parts of the course are dead zones.

There are about three weeks until that qualifier which is plenty of time to play another practice round once the greens finish healing.  I’ll probably head out in late May to give it a go.  To me, that is the most important part of a practice round at a course you don’t have experience on.  Ball striking is often up to distances and knowing which side of a fairway to aim for, but putting can be subtle and easily add strokes to someone unfamiliar with the undulations.

I’m excited about that qualifier.  This is the first year that I have had a low enough handicap to have a shot at the tournament.  Last year I missed the handicap cut by about one stroke, but am pretty sure I will be in the qualifier playing field this time.

Speaking of tournaments, I have budgeted $1,000 this year for those events.  So far I have spent just over $200 in 2014 on tournament rounds.  The Oregon Am is $100 for the qualifier and an additional $100 if you make the actual playing field.  I hope to play in the Oregon Mid-Am and Oregon Stroke Play which are $175 each.  That means I have either $350 or $250 remaining depending on if I get into the Oregon Am in mid June.

The majority of that will go to the Royal Oaks Invitational if I get the invite for that event.  I’ll know more soon, but the ROIT is a good tourney that I really hope to play and it costs $275 for the three day tourney.

I also plan on playing in the Forest Hills Am and the Portland City Championship at East moreland which cost about $120 each.  I suppose I’m going to go over budget by a few hundred this year all said and done, but it’s important to get that experience so I suppose I should up the amount I can spend on those events. $1,500-$2,000 seems more reasonable this year as I would like to play in 8-10 larger events.  Next year I will have to find a sponsor as the bigger scale tournaments (like the E-Tour or Pepsi Tour or Gateway Tour) can be between $500-$1,200 per weekend.  But, that’s for down the road and there is plenty of time to figure that out before then.

There are tons of smaller events that I have been and will continue to play in, too.  The easiest way to get at least a minimal amount of tournament pressure is by playing in the regular Thursday and Saturday games at Riverside and other golf courses.  Although there isn’t the same pressure as a once-a-year event, it is at least a way to play in something regularly that you are directly competing with others and have to turn in a scorecard to a third party at the end of it.  Those just cost 5-20 bucks a day and are good practice.

When other events come up I will post them and I hope to play in a couple member-guest events, the Riverside club championship, more NW Golf Guys Saturday tourneys a piece, some match play rounds, etc.  But, for the most part my main events coming up are the larger OGA tourneys of the year and I am excited to be in the field.

One more thing…  I was also just informed that there is a Web.com event at Pumpkin Ridge this year.  That’s just outside of Portland and I here there is a local qualifier.  Not sure what type of qualifications you need to enter, but if I can play in that qualifier count me in!