I see the implementation of new swing aspects at this point in the journey akin to a behavioral change.  It’s similar to eating healthy or taking up a new workout routine or spending 30 minutes a day learning a new language.  You know that sticking to the plan and working at it will eventually lead to where you want to be, but it’s easy to revert to past habits and allow stasis to take over.

In the past there have been a couple occasions where I planned out a specific change and then after working at it for a period of time (which I thought was substantial enough) I arrived at a place where I needed to play competitive golf and ended up reverting to older habits or getting stuck in the limbo that is half old half new, which typically results in golfing death, because I had not fully ingrained the new habit/change.

I recently found something in my swing, a new feel, that produces the shots that I have been gunning for.  Nice high slight draws and baby fades that start close in line with and finish at the target.  I’ve played a slinging draw for the past 6 or 7 months without really knowing why, but I finally realized that through a different feel in my wrists during the takeaway I can get the club more on plane.  Long story short, it’s good and I like it.

So now comes the implementation period.  I worked it on the range for about a week while slowly starting to venture out on the course and the results were increasingly encouraging.  Then I began to play 9 and eventually 18 holes with just the new feel in mind and the results kept coming in positively.  I still don’t have a great feel with my tee shot so I am missing a lot of fairways, but with the irons it is pretty comfortable.  A lot of the problem with my tee shot, too, is that I am used to aiming down the left side and slinging it back to the right, but now that I am playing a pretty straight shot I am ending up in a lot of trees out at Riverside.  I just need to learn to aim down the fairway and trust that it will go where it is supposed to.

I stuck with the new feel for a couple of rocky rounds and then progress showed itself in a nice little 73 yesterday that looked like this:

It was a funny round as I missed almost every fairway, but when I had a look at the green I was hitting it really well and close to the pin.  I missed three putts from about 5 feet and had an unplayable shot on the 18th which ended up as a bogey.  outside of that it was a solid round where the new swing was really starting to pay off.  I was pretty excited as it felt like effortless power and the ball flight was sweet.  My playing partner, who I had never played with before, commented about how good a round could have been had I been able to hit some decent tee shots.  It’s always great to have obvious flaws as you know exactly what you need to work on.  I have faith that with the new swing once I get a better understanding of impact positions with the longer clubs things are going to step up to the next level.

The next day, though, I struggled to “find” my new feel and it wasn’t until about the 9th hole where I started to realize exactly what I was wanting and needed to do.  The entire round I could have very easily reverted to my old swing and gotten around the course much better, but you have to give these things time and you have to be able to play through the crappy rounds in order to really find what you are looking for.

Today’s round was a much darker shade of good: 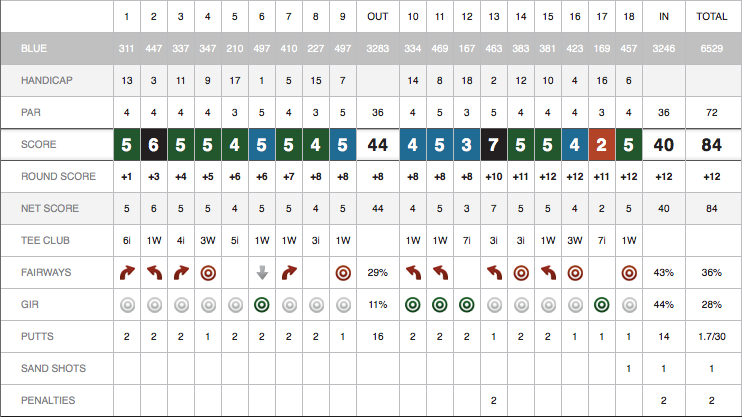 I technically hit more fairways than the day before, but my misses were much farther from the fairway and often in a spot where I could not get a good punch out.  And, the irons were not treating me like they had the day before as I could not quite find the new spots in the swing.  I hit a couple good shots, like the birdie on 17 from a 170 yard 7-iron that landed 2 feet from the hole and a few good saves for bogeys, but all in all the round was about sticking with the new regardless of the outcome as that will come with due diligence and time.

Both bad and good shots are part of learning and in a lot of ways we can improve more from sticking to our guns and working out the kinks during rounds like today’s.  There are a lot of bumps along the way; figuring out what you want to do and then sticking to it regardless of the immediate outcomes is the secret formula for improving.

10 Responses to "Facing the learning curve"