I have no clue why this is, but every time I have a bigger trip planned I miraculously catch a head cold a few days before the flight.  This trip is no exception and I find myself masking a cough with some over-the-counter syrups while trying to stay focussed during a very interesting and busy part of The Dan Plan.

While the cold will soon pass, the knowledge I learned today may take a few weeks to a month to truly set it.  I went to get trained on the FlightScope by the NW rep, Michael Neff, who I knew from previous encounters as the golf world is surprisingly small, out at Columbia Edgewater today.  It was good to work with Neff and to be back out at the range of CECC.  We went right into the nitty gritty as a lot of the features and data the FlightScope gathers is the same as TrackMan.  One of the biggest differences is that TrackMan declines to display data if the radar doesn’t pick up enough detail, whereas the FlightScope will give numbers on every swing.   On one hand it is nice that TrackMan doesn’t give any partial data, but on the other hand you can just delete a swing on FlightScope if you think it picked up just as much sod as ball.  I digress, though, and will post a thorough review once I have had the new machine for a month or two.

For the time being the story got more interesting after we went through the training and just started hitting balls and talking about the numbers.  I wish I had taken a screen shot, but the gist of what we were looking at is that my numbers are pretty crazy, really.  I can go into details once I have hit and gathered some data, but for now Michael showed me how off my irons are for my swing.  We played around with different things and found that when I went with a 4 degree flat 1/2″ short shaft in my irons my swing numbers squared up and I was hitting it with optimal smash factor and gaining ball speed, optimizing trajectory and increasing distance as well as improving my scatter pattern.  It was making a huge difference and I was pretty shocked.

He said that he wouldn’t be surprised if my coaches had been having a hard time fighting some of my habits because a lot of the habits were due to compensating for the shafts setup that I had.  When we looked at my arm length compared to my height it also made sense.  During the swing my arms are very low creating a horizontal swing plane (HSP) that doesn’t match up with my iron profile.  But, when we went with the 4 degree flat shorter shafts the HSP got on track and everything else lined up better.  I could then actually swing to the right instead of coming at the ball from 6-8 degrees from the inside (I’m a lefty, remember), which was squaring up the path and face.

Neff said a lot of the issues I have been struggling with were due to my club setup.  He was not trying to sell me anything and I trust his technical knowledge and have known him for a couple of years, so I believe what he says.  And, when we got an iron with the setup he thinks I need all of my balls were flying so consistently and effortlessly.  My 7-iron swing speed got up well above 90mph and the smash factor was right at 1.38, which is pretty optimal for that iron.  With my gamer shafts I was getting a smash factor of about 1.3 and swinging inside out about 6 degrees with a shut face at impact, but hitting the ball towards the heel of the club to compensate for the shut face.

I am not going to change anything right now because I am about to go on the trip and need to be able to play how I know how to play, but it was eye opening to see how much bending an iron can change the impact numbers.  I am also not financially in the market for new irons, but am interested in trying out his setup and bending the ones I have when I return to see what happens.  That’s the beauty of forged irons: you can play around with lie and loft and always go back if it’s not working.

Long story short:  I’m going to work with the FlightScope and figure out what I need to do to optimize my current swing.  That may mean bending some clubs and it may mean getting some new sticks altogether.  Whatever needs to happen, I now have the right tools to figure it out.  After Switzerland that will be one of my practice priorities.  Gear, mental game, swing, physical fitness, diet, etc.  There are a lot of things to continue to improve.

For now, it’s officially the beginning of rainy season here in Oregon: 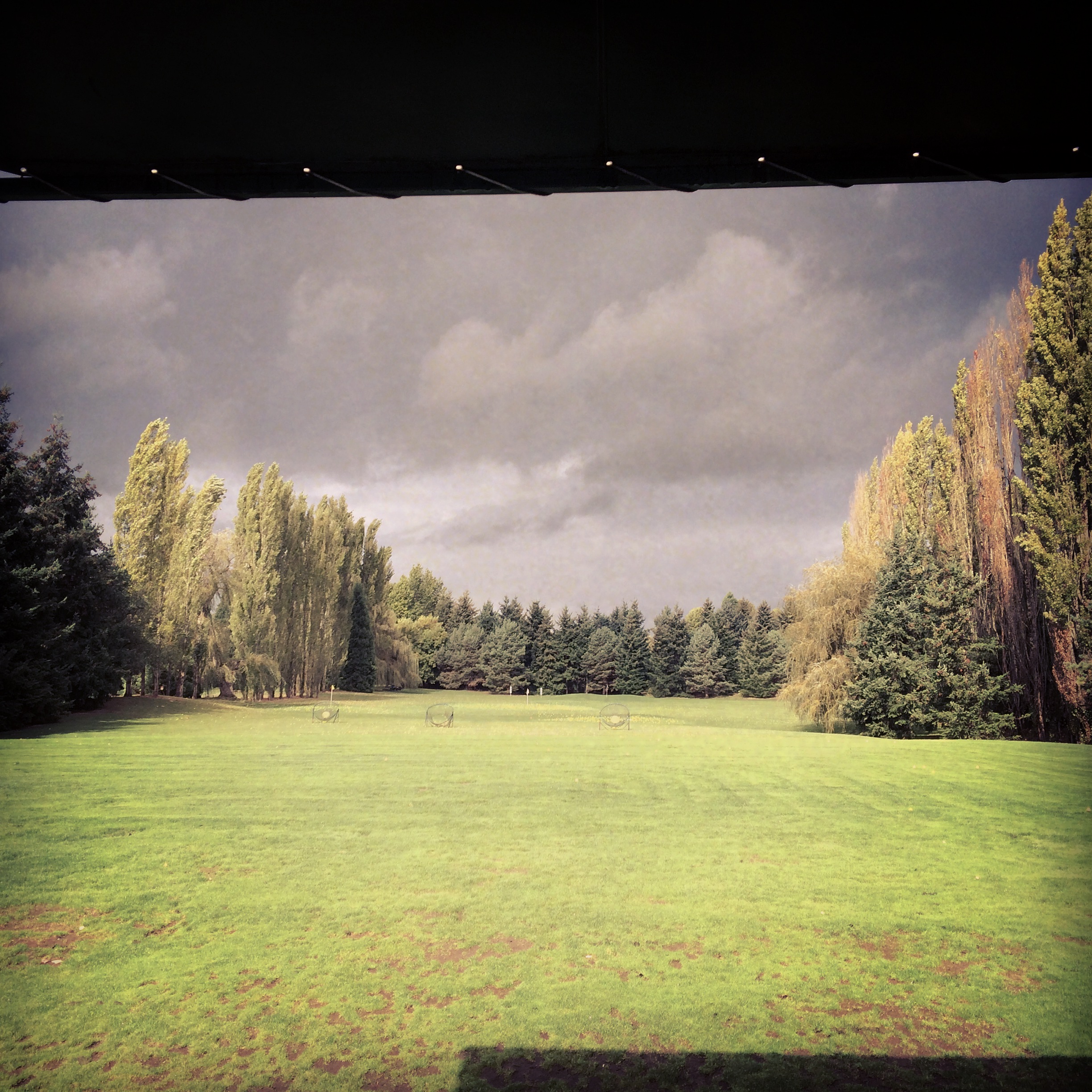 But I have some new rain gear to dive in with.  I went with Zero Restriction this year and am very impressed with the jacket so far, will try the pants when the stuff really hits the fan. The jacket is easy to swing in and as dry as can be on the inside:

One more, I swear by next summer this ball is going to be completely consumed.  I keep wait for the day when I walk by and it’s no longer visible:

Time for one more round today, some fresh air will help the cold dissipate, and then will get packed up and ready to head to Switzerland.  I have two rounds planned so far in Zurich and am excited to see what Swiss golf is all about.  I have a feeling the ball may fly a bit farther than sea level Portland.

6 Responses to "FlightScope ready and some d plane thoughts"