1,138 miles later I arrived in an aesthetically foreign place.   I can’t imagine anything more different than the Pacific Northwest.  Here is part of the drive into the Coachella Valley:

I’m a bit shocked that anything exists here as the non-irrigated parts of the city are pure and true desert.  Even in January the days hit 80 degrees and there is hardly ever any rain.  But, Cahuilla People have lived here for the past 350-500 years and the first resorts/hotels were actually built back in the 1880s, which way predates air conditioning.  It’s probably safe to assume that this area has always been much more popular in the winter than summer.

I’m staying with my friend Scott who is a solid golfer from Portland, but who works at a golf course through the winter down here in order to improve his own game year round.  I didn’t know anything about the layout of this area until arriving and it turns out he lives/works at one of the nicer golf courses:  Mission Hills Country Club.  The Dinah Shore Tournament course here is home to the Kraft Nabisco Championship which is one of the five Majors for the LPGA.

I came down here to work on my swing with my coach, but I couldn’t pass up the opportunity to play the Tournament course on my first day.  It is am amazing track and in pristine condition.  Here is the 18th hole from the tee box then the green.  It’s a 646 yard par 5: 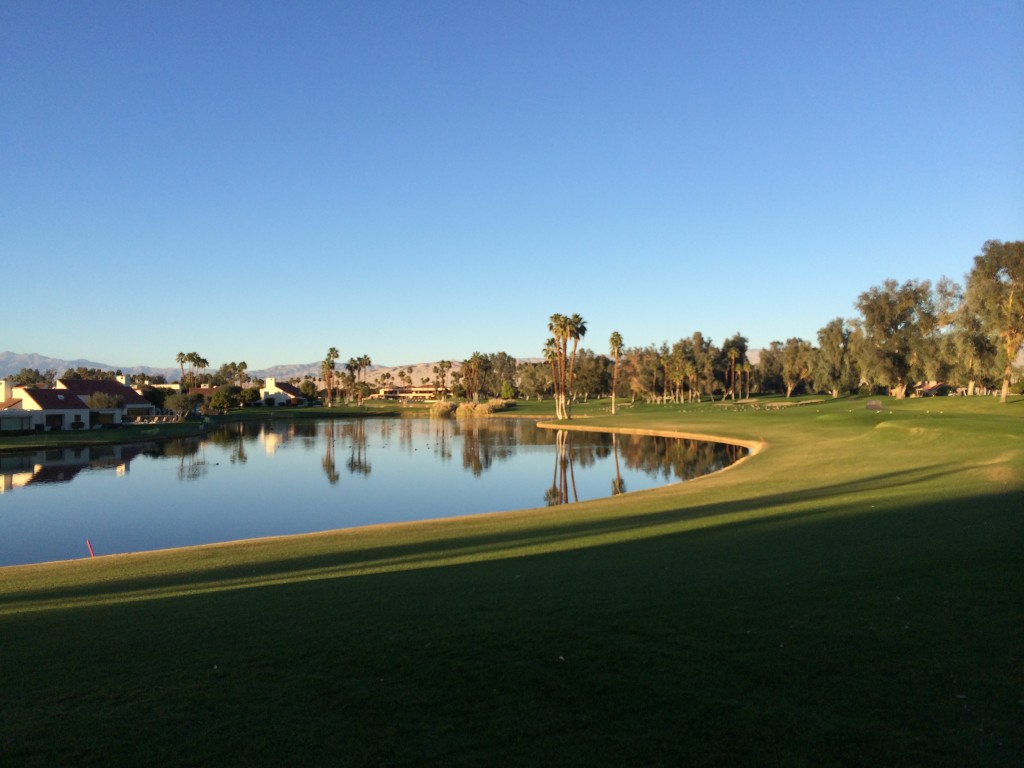 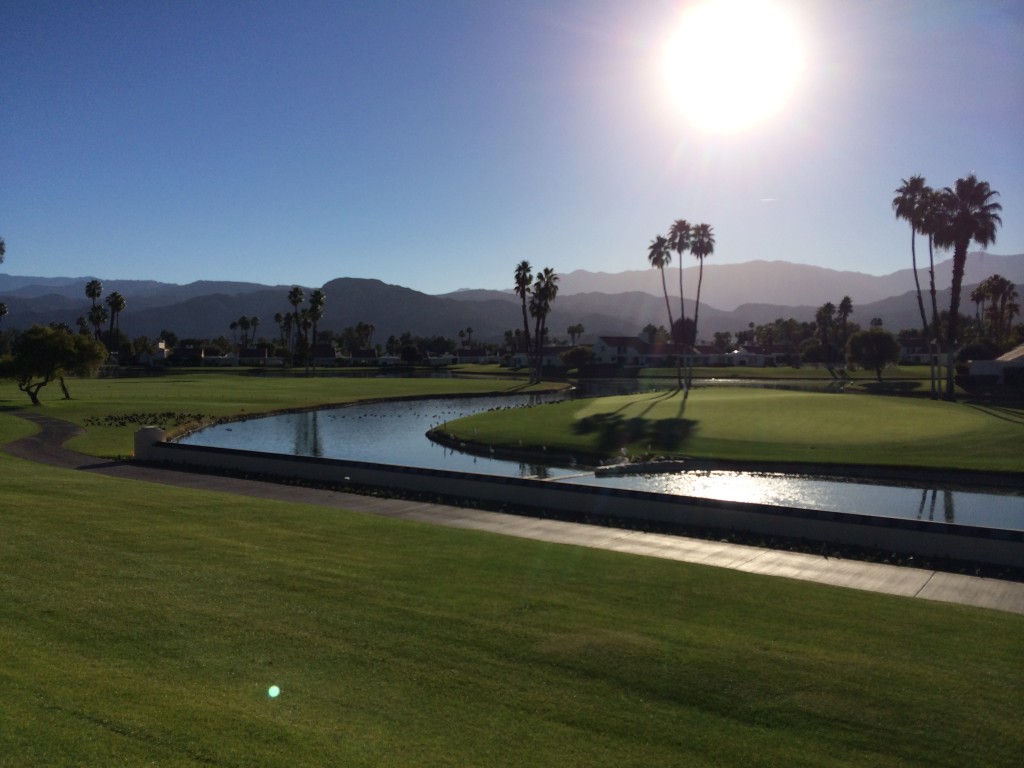 It was my first time playing a legit 7,200 yard course and all I think I need to say is that when you’re driver is erratic like mine right now you have a lot of 190-230 yard approaches on the par 4s.  Mostly is was a learning experience with the short game, though, as the greens, bunkers and fringe are very different than the wet bent grass of the PacNW.  It took a few 3-putts and bunker shots to start to get a feel for the place, but by the end I finally started making some pars.  Very fun round and I hope to have another shot at the course at the end of my stay here.

The next day I went to see Bruce Furman who teaches at PGA West’s La Quinta Mountain and Dunes courses.  It was absolutely wonderful to see him out there and catch up on everything that has been going on since he left Portland in early November. Here is his “winter” home:

Not a bad place to hide out from the Oregon rains…  I was lucky to get a lesson from him and then be able to practice out there until the sun set.  It was one of the best practice sessions I have had in probably a month.  I would have stayed out there all night if they didn’t close the range.

We had a lot to work on with the swing.  I’ve truly been struggling with my longer sticks and know that I need to continue the transition from past swing to the new more consistent swing, but without his eyes I have unfortunately not been progressing as quickly as I had hoped for the past two months.  Now, though, he could see what I was doing and shed light on what needs to happen next.

The biggest aspect that he told me to focus on was making a better shoulder turn.  As it turns out I was keeping my lead leg frozen in the swing which didn’t allow me to really turn my hips which in turn was keeping my shoulders flat and not optimizing my power while also making the club less consistent through the ball.  It’s amazing that after almost 3 years of making full swings that something as simple as which way my knee bends can make such a big difference.  It’s all very connected and if one part of the turn/swing is going the wrong way it influences everything else.  My swing has been like a Rube Goldberg machine with missing piece.

Here are a couple videos about some things he is having me work on and change:

It’s all good stuff and exactly why I am down here.  When I made the bigger shoulder turn and connected with the ball well I was carrying it into the fence at the back of the range which was 265 yards away.  I was getting about 250 yards of carry on a good drive.  That’s a huge improvement during one lesson.

Now I have to groove the new shoulder turn.  It’s easy to do it on the range when you can hit ball after ball, but I need to make it so a full shoulder turn is the only swing I know and it’s my go-to shot on the range.  Then, and only then, will I be able to actually play with it.   Luckily, I have a couple more weeks where of a free place to stay with Scott and plenty of sun to light the ranges down here.  I hope to get in as much practice as possible and bring home a completely revamped golf swing.

On a side note, a Swedish TV show aired yesterday with interviews by Dr. Ericsson and me:  http://www.svt.se/sport/talangprofessorn-talang-ar-bara-en-myt

6 Responses to "Getting to work in Palm Springs"