Before I start this second section of the golf ball review I am doing I want to do a little catching up.  I returned to Portland two days ago and was glad to be home and excited to get back to some greens that I deeply understand.  It was a pleasure and an experience to golf on bermuda greens on Hilton Head Island and I hope to go back soon (parents live there now so it is a place to regularly visit) to have some more practice time on those courses.   By the time I left I was starting to get the hang of how to read grain and get a feel for what how the ball would react both on the greens and out of the rough.  It will take more time to improve that feel, but it was a good trip and a good start.

Also, when I returned home, a sweet new Vokey Wedges golf bag was waiting for me.  I can’t wait to get out there and rock this new bag, it’s really well made: 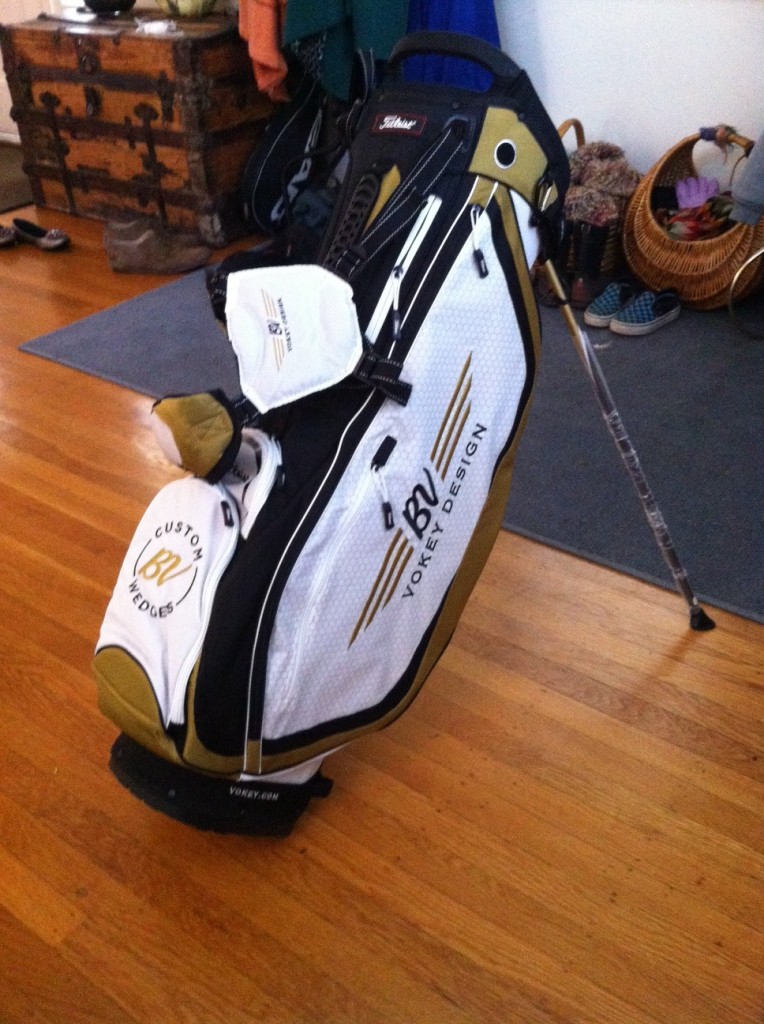 One more note before starting with the golf balls.  I love this time of year.  The leaves are all changing, World Series is underway, college football is getting interesting and the weather and courses are perfect for golf.  All around, October is a wonderful month:

On to the test.

Srixon Z-Star SL:  This ball is a urethane covered 3-piece ball.  I didn’t realize when I purchased these balls that they were a lower compression ball.  I asked the guy at the shop for a sleeve of the Srixon Tour balls and he sold me these.  I’ve never played Srixon so didn’t know the differences between their Z-Star line and assumed they were all about the same.

What I found while playing it was the ball felt very soft.  It compressed well, perhaps too well in some cases, and was one of the longer balls that I tried, especially off of the irons.  After a couple of holes I started to realize that this had to be a lower compression ball based on feel, they played similar to the Bridgestone E6 or E7 balls and to me seemed like a good choice for someone who has a swing speed around 75-90 mph with their driver.

Around the greens the ball released a bit, but still checked up fairly well.  Most of my shots felt like fliers, though and a lot of shots from within 100 yards ended up over the green or on the back of the green.  All in all it wasn’t a bad ball, but just felt too soft off the driver and longer clubs.  I will have to try out one of their other Z-Star balls, though, as the cover was nice and it seemed like a quality ball in the right hands.

Callaway Hex Black Tour:  This is a five piece Urethane covered ball.  This ball had a totally different look in it’s dimples, I suppose that’s their whole schtick with the hex dimples.  The ball had decent performance and stood up with the Pro V1X as far as full-swing ball striking went, especially off the driver and 3-wood.  Distance control was very similar, I knew after 9 holes that when I pulled a specific iron the ball would be within a couple yards of where I thought it should be and how the ball checked up on the greens was comparable to the Titleist, meaning I got it to one hop stop with full shots ending up about 3-4 feet past the landing spot on fairly firm greens.

What was different was short game shots.  Putting wasn’t too off by any means, but short pitches and chips didn’t have a great feel off of the club face.  It’s supposed to have a Urethane cover, which is the same material in a lot of “tour” balls such as the Pro V1 line and the TaylorMade Lethal, but it had a more plastic feeling to it.  Like a hard plastic wrap somewhat similar to the Nike line, but not nearly as hard.  I couldn’t quite get over it around the greens and it started to bug me a bit.  All in all, it’s a pretty solid ball, but short game feel is so important to me and I couldn’t really give that up unless the rest of the performance was dramatically better.

Bridgestone Tour B330:  Four piece urethane covered ball.  I like the Bridgestone lineup of balls.  For me, they are a second choice if I happened to have forgotten my Pro Vs and the shop was out of them:  Bridgestone it is.  The E6 and E7 are nice lower compression balls and the B330 was a high performing top line ball.  The urethane cover had a great feel around the greens and while putting and the ball had a solid sound coming off of the driver.  All in all it played well and I reacted according to the swing that was put on the ball.

The ball had a nice amount of spin, evident by the height of shots and from how it checked up nicely around the greens.  I played four different par 3s with both the B330 and the Pro V1X and each time the ball ended up within 3 feet distance wise of each other.

This brings me to what I think is the point of all of this.  The Bridgestone and TaylorMade are both pretty solid golf balls.  That said, when it comes to tourney time or if there is something on the line and I need a ball that I can completely trust, I will be hitting the Pro V1X.  It’s not that I have played the Titleist for a long time (I’ve only used them as my main ball since about March 2013) but there is something about teeing one up that instills confidence.  I know there are some comparable balls out there but nothing beats the all-around performance of the Pro V line.  This has been an eye opening and interesting experiment for me, as well as one that has helped build confidence in my current gear.  I would encourage everyone to try as many different balls as they can to see what fits you best.

Dixon Earth:  I had to add this ball as they tote their environmentalism.  I love the idea of this as we have all hit way too many balls in the water or lost them somewhere and a ball that breaks down over time is better all-in-all than one with a non-biodegradeable plastic cover.  This one has some pretty decent performance to it as well.

It hit pretty well and had some compression to it as well as lower spin off of the long clubs creating nice distance.  It wasn’t, as I suspected, the best ball around the green or out of the bunkers, but all in all I was impressed by it’s performance.  It’s a great ball to use in practice rounds and is, I suppose, slightly better for the environment.  The best thing for the environment, though, is to play with one ball and to stay out of water hazards :).   Nonetheless, a solid idea and I applaud them for doing something different.

That’s the end of my test.  Well, almost the end.  While in South Carolina I only brought a few balls with me and seeing as there was OB left and right on most holes down there I ran out of my Pro Vs with about 36 holes remaining to be played.  Instead of purchasing new balls (it’s hard to bight the bullet and spend 12-15 a sleeve at a golf’s pro shop) I played with whatever I found around the course.  Sometimes I found nice balls and sometimes I found “others”.  The others included a few balls I had never heard of and some Wilsons and Top Flights.

One that I found on the course was the Wilson Staff FG Tour X.  As it turns out, it’s their “tour” ball and for the life of me I could not lose it.  It wasn’t a great ball and didn’t feel or sound particularly nice, but it was solid and went forward when hit.  The distance was similar to other tour balls but it didn’t check up that well.  That said, I literally couldn’t lose it.  I played it until I found a name brand ball that I knew and would switch until I hit that one OB or it plugged then would switch back to the Wilson.  I seemed to always be able to find it no matter how poorly it was hit.  Not sure if I would recommend this ball or not, but there was something special about this particular ball.  I’ve had a similar experience with a Pro V last year, ended up playing 99 holes with the same ball even though I wasn’t playing especially well, just couldn’t seem to lose it.  Maybe I should give these Wilsons a shot and purchase a test sleeve…

I also found plenty of Top Flights, which played about as suspected.  If you want to grab a dozen balls for about 10 bucks these will definitely move forward when hit.

That’s that.  So many different choices out there.  Personally, I am glad that I still know what I thought I knew and will happily continue to play my Pro V1xs.  Worse comes to worse I know more about all of the other options out there.  There is always more to try, but this was a great start.