When was the last time you drove 1,000 miles in a day?  For me it was back in 2000 when I had to get from Atlanta to Providence, RI; a route that happens to be just 43 miles shorter than the journey from Palm Springs to Portland.   I’ve driven long hauls since, but haven’t cracked a grand in 14 years.  Yesterday was almost the exception, until I realized at 10pm that I still had more than 300 miles remaining.

Long drives can be both therapeutic and tiring and yesterday’s was very much both of those.  I stayed with my long-lost cousin the previous night in Palm Springs (I had not seen him in 25 years and he is now married and has a 3-year-old) then hit the road yesterday morning; 770 miles later I landed in the town of Yreka well on my way back to Portland.

Along the way today I passed through a large dust storm and saw plenty of California tree-based farms: 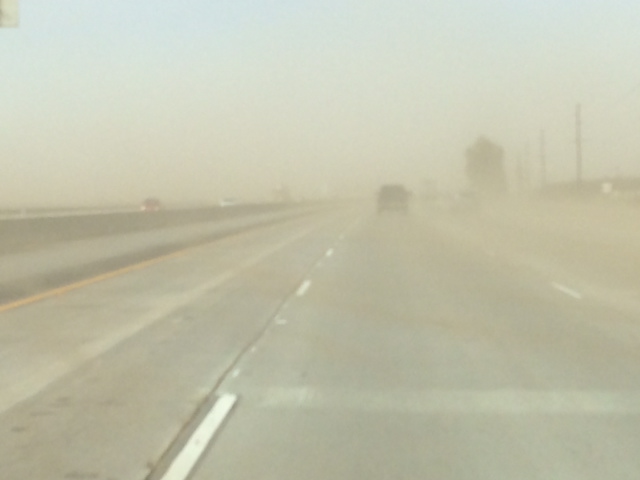 I had a lot to think about as nearly everything in my life has taken a giant 180 over the past month.  I am not quite ready to write about most of these details as I need more time to process them, but eventually there will be some deeper blogs posted covering the non-golf aspects of my particular life.  Also, barely any of it is golf related, so not exactly pertinent at this moment in time.  So much can and does change during what is now a 7 year project.  The way I see it, if you’re living it right, change is inevitable in life; both for the good and bad.

On to the club fitting part deux:

After finishing with the wedges, which have produced some awesome results on the course since getting them including dunking a 53-yard shot on this hole at Bermuda Dunes: 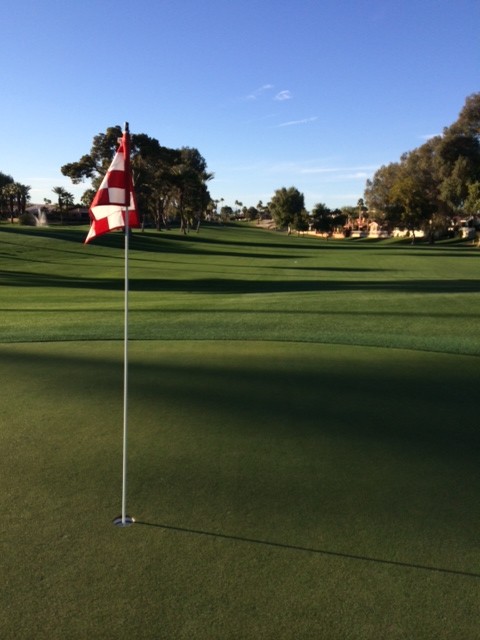 Steve Ziff and I went over to hit some drivers.  I was stationed next to Kevin Foley who is a rookie on the PGA Tour whom I noticed shot one under in Thursday’s round at the Farmer’s Insurance Open.  I wasn’t nervous or intimidated, mainly because I have been so frustrated with my driving and driver that I didn’t really care how I hit my gamer club.

To step back a second: last year when I went down there I had a flat quick swing and they fit me into a tipped extra stiff shaft which was supposed to tighten my misses, but in reality has caused me a long running headache from the tee box.  I never felt like I could feel the club head in the swing and my timing was all over the place causing misses in every direction.  That, mixed with my swing changes, has not been a recipe for consistency.

Steve had me hit a number of drivers and I just couldn’t seem to connect with any of them particularly well.  He was giving me swing tips with tempo and my turn but still I just wasn’t finding the ball.  It was odd as I hit all my irons and the little 21 degree hybrid well, but I couldn’t make contact with the driver or 3-wood for some reason.  I know they are the hardest to hit and the newest sticks in my bag, but I felt like something was just not right for me yet.

We took a short break and talked about it.  10 minutes later he had an idea and put me in a Phenom 70 gram stiff shaft.  He told me to essentially just relax and swing with my shoulders and I started striping it down the middle.  The shaft was a miracle in my mind as I could feel where the club head was through the entire swing and finally started hitting some drives in the fairway.  It was great!  My ball speed was acceptable, too, between 154-158mph and the spin was down to a playable level (around 2,000).  It was a winner and I was excited to trade up my stick for the new one.  It just felt right and to me that is 99 percent of the battle.

After we discovered that we used the same shaft in the 3-wood and got very similar results.  I was carrying it 235 yards and hitting them with either a baby draw or fade, not quick hooks or giant slices.  Pure gold.

Based on those, he found a 3-hybrid with similar specs and the results were once again solid with carries of 210-220.

To step back yet again, I think I need to talk about how my swing has morphed over the past 9 months.  I first arrived in Carlsbad in April, 2013, two weeks away from beginning my work with coach Bruce.  Bruce has been helping me systematically improve my swing with large plane changes over those months and the clubs I was fit for back then were the wrong shafts for me just a few months after that fitting.  At the time I did question whether it was smart to get fit then change my swing, but the guys at Titleist assured me that I could come back once I had an updated swing and they would find gear to fit.  And, I still love and use the PW-4-iron I was fit for at that visit.

Steve Ziff told me at the end of this fitting that eventually I would be back into those x-stiff shafts, but for now a bit more flex would help me learn how to time my swing and would be a good fit for the next 8-12 months.  Once I have this new swing fully grooved and start generating higher swing speeds I will probably go back to my older shafts which I will keep for that transition.  He also suggested I get a regular flex driver (a noodle) as a practice tool as you have to really learn how to release the club at the right point.  I’m going to look into that and pick up a cheap one next time I see one.

Another thing I need to cover is my hybrid situation over the past couple months.  Around November I was getting frustrated with my inability to hit a driver and 3-wood so I tested out hybrids at a local mat-based range.  I ended up picking the Nike Covert and bought it online for less than $70 in the exact specs that I was using off of the mats.  I hit it very well there and was ready to have something I could use on the course to get me more than 200 yards.  The strange thing, though, was that once it was in my bag I couldn’t seem to hit it off of grass.  It was great from the mats at my home course, but once I got on an actual course the club just seemed to grab the grass awkwardly and after a week I took it out of the bag.

I won’t make that mistake again.  From now on if I want to test a new stick I will use it on grass as you never know how something will perform if you only hit it off of a mat.  That’s another thing I love about the TItleist fitting experience; they have you hitting off of grass and even have you hit some uphill and downhill shots to see how the clubs perform on non perfect lies.  To find out more about the Oceanside facility, check out the link here:  http://www.titleist.com/golf-club-fitting/

I left the facility feeling good about the sticks that Ziff fit me into and headed up to LA.  Two days later I was back in Carlsbad for a lunch with some Titleist guys on my return trip to the desert.  During lunch we talked about the fitting and how I needed different clubs just 9 months after my previous fitting and how unique that was as most people can use the same clubs for 1.5-3 years.  How much I have worked on the swing and changed things, though, was the reason that I was back so soon.  After lunch they mentioned that there were some used demo clubs in the basement of Titleist HQ and there was a chance my shafts or wedges might be down there.

We went on a scavenger hunt through the facility and randomly found the two new wedges in my exact left-handed specs.  Then we found a driver with the shaft that I needed and finally the 3-wood shaft. We couldn’t find the hybrid, but the rest of the sticks were now already in my bag.  It was a great coincidence that we happened upon those “slightly” used clubs.  From what I could see they had never been hit, but had indeed been used as demos, albeit barely.

I’ve played a couple of rounds with the new clubs and have had some solid results.  But, I want to wait and talk about that after I have had them in the bag for at least a couple of weeks.  For now, it’s time to drive the remaining 300 miles back home.