The holiday season is a chance to hit the pause button on life for a moment to ponder past, present and future endeavors. For me, the deep thoughts started a couple of days ago when our car broke down because the gas station attendant put regular unleaded in our diesel. (footnote: Oregon and New Jersey are the only two states in America where you cannot pump your own gas.)

We went to Hood River to take the kids on a Polar Express train ride to the “North Pole” and on the way back we stopped to fill the tank. The car drove the entire 50 miles to Portland without any issues, although was revving and sounding strange when we pulled off of the highway. We ran in a store for some last minute groceries and when we tried to start the car again it sounded awful and wouldn’t stay on. The smell was strange too.. That’s when we pulled the receipt out and saw that they put 10 gallons of regular in the tank. There was no starting the car and it was late in the evening Sunday so we left it at the grocery store to have towed the next day.

Early in the morning I called around to find a mechanic that was working, and luckily one of the best shops in town had their doors open until 3pm. I got a tow, followed the AAA truck and when chatting with the garage they pretty much said that the engine was totaled and it would be more expensive to replace than the 1983 300D mercedes diesel was worth. We won’t know for sure until tomorrow after they have a chance to flush the tank, but odds are against the little fellow making it. It’s really a sad story seeing as the car was on the road for 30 years and 205,000 miles and ran like a champ. It never once hesitated starting up and probably had another 100,000+ miles left in him, but a silly oversight by a gas station pumper killed the poor guy Sunday eve.

I’m not sure what will happen next. The gas station owner says he will pay for the repair and hopefully he’ll follow through on his word and we will try to find another vehicle that is a suitable replacement in the next week or so. Life will certainly be fine, but it definitely forced another day of solid reflection and deep thinking. This is the third time that something major has happened in the past three months and each time it’s hard not to think how much easier solving these problems would be if I had a “normal” job (ie. one that pays in money).

It is dangerous to look down at the green pastures across the street and think how easy it would be if only… These things happen and when they do you just deal with it. Every process has it’s ups and downs and just like golf you cannot get too attached to either extreme. That said, it doesn’t mean that I don’t think about what the situation would be like right now if I was back in the workforce. And, what it would be like if I had not left my job in the first place. In the 2 years 9 months since I left my past career I would have made roughly $150,000 instead of spending $50,000 on the project. I’m pretty sure with that difference we wouldn’t be fretting so much over a car worth about $3,000. But then again, if I hadn’t quit my job and headed out on this journey a lot would be different in my life.

Used in this manner,If has the be the most dangerous, and perhaps pointless, word in the English language. There’s always an “if” and the thing is, it’s otiose to linger on the could-have-beens of life. So, instead of dwelling on some non-existent ideal I’m going to figure out how to deal with the situation with the tools I have on hand and just like the last two times that something major happened and we weren’t sure how we were going to get by a solution will present itself in due time.

I made a choice in my life to pursue a dream. I knew it wasn’t going to be easy and I figured a few non-plannable things would happen along the way. Sometimes they fall in your favor and sometimes the ball lands in the trees.

Things happen. You simply cannot prepare for every possible unforeseen development. Especially if you are planning out a six-year project. But that doesn’t mean that you plan to only continue when the times are good. You have to push through everything and only when you accept the fact that you are going to continue despite any potential hardship can you allow yourself to fully visualize success. There are no golden parachutes nor pension plans, there is only hard work paving your future. And that is all you need.

The good holiday season news? In the older vehicles it is possible for the glow-plug to get hot enough to literally ignite regular unleaded fuel, and in turn exploding the gas tank. We drove 50 miles down the highway with a tank full of unleaded in pouring rain and the car not only didn’t explode, it actually made it all the way to Portland and broke down less than a mile from our house.

“We are so lucky,” Mary said to me after the kids were asleep. “Lucky?” I asked a bit confused. “The engine could have locked up and we could have lost control on the highway; it was so easy to hydroplane,” she said. I thought for a bit and realized just how right she was. “It’s just a car, we can figure it out.”

She was right. The situation doesn’t matter in the long run. What matters is that we all made it and were able to spend the holidays together. Everything will work out in time and we are all exactly where we want to be.

I truly hope that everyone out there has been having an amazing holiday season so far and has the best New Year’s and 2013 possible. Every day is a new adventure and an amazing one at that. Don’t forget to try to enjoy both the good and bad times and remember that overcoming challenges is how we learn.

What an engine!!  The mechanic flushed all of the unleaded, changed the oil and lubricated everything then put diesel fuel in the Mercedes and it started up!  The car survives!  The mechanic said that he was surprised that it was working after driving for about 50 miles on regular, but that it’s a testimonial for the quality of these old 300D engines.  Feels like we just shanked a drive into the trees but found a small hole and punched out all the way to the green.  Now we have a shot for birdie.

I have a new ball to place on my landmarks rack: 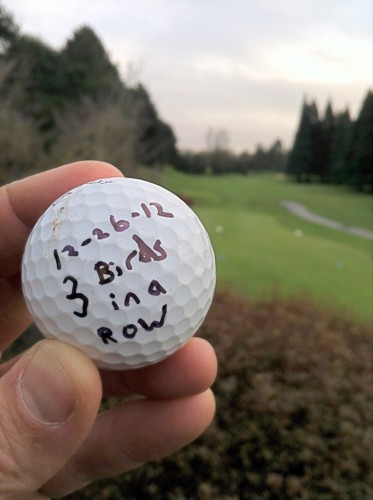 I hit three birdies in a row for the first time yesterday.  It felt great.

4 Responses to "Good time for reflection."