I’ve had a few good days out on the links  (And, just looked up why they call it the “links.”  Wikipedia says:  “Early Scottish golf courses were primarily laid out on links land, soil covered sand dunes directly inland from beaches. This gave rise to the term golf links, particularly applied to seaside courses and those built on naturally sandy soil inland.”).  My scores are slowly migrating south towards zero and if I could just manage to either sink a few putts from within ten feet or NOT three putt I would be closing in on par.

For example, I hit a great 100-yard pitch on the 18th hole of the Great Blue course out at Heron to five feet from the hole.  I then landed a 75-yard shot about 6 feet from the pin.  Finally, I hit a 50-yarder thin and blasted it 35 feet past the cup to the fringe.  From this, it would seem like two easy birdies and a par for two-putting the 35 footer.  But, golf being the unpredictable sport it is..  I made the fringe 35 footer and missed both the 5 and 6 foot putts.  ‘Tis the way of the world sometimes.

On a happier note, I had my best hole yet out there on the Greenback yesterday.  Below is the view looking back from the hole over the bridge.  It’s a lovely hole, this one and by the looks of it Spring is starting to show in Oregon.  I made a couple good putts and another decent two-putt to score two birdies and a par for this hole after playing from 50, 75 and 100 yards.  Hopefully there will be much more of these to come, and by my experience that is the case.  What was once an exciting moment soon becomes average.  There was a time when I blogged about how excited I was to sink my first 10 foot putt.. 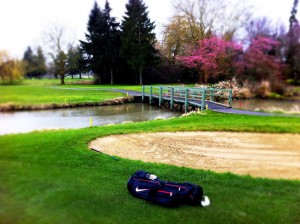 Speaking of Spring showing it’s head, it’s definitely rainbow season again in Portland.  last year it seemed like there was a rainbow over the course every single day and I became convinced that if you were outside 24 hours a day you would see one without fail.  Here is maybe the first of the year (or at least the first I have noticed.): 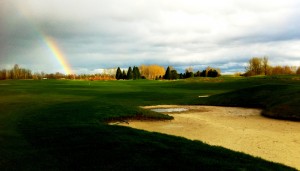 Today, I went out to see Christopher Smith at his swing room facility in Beaverton.  We were looking at my full swing on his high speed cameras and he pointed out a few good things about it and some areas to work on in the coming weeks.  Mostly, I have reverted to an old habit of starting my motion with moving my hips laterally backwards.  By doing this, I make it very difficult to get my body in a good position to hit the ball, leading to both thin and fat shots.  So, I’m set out to pay attention to that and adjust how I take the club away.  We also looked at my forward movement and found not enough laterally forward hip movement.  Those two things are definitely connected and are something good to focus on out at the driving range.

Speaking of driving range, I purchased a multi-play card from Heron Lakes and incorporated range tokens into the package, so will be spending lots of time out there this summer.  If anyone ever wants to come out and hit or play nine, I would be more than happy to meet you there.

Also speaking of driving range, I need to stretch my back out.  It’s been a long first week of “full” swings and my back could use a night of relaxation.  To the links in the morning!

One Response to "Good times are chipping"