I set all types of goals.  Most of them are process oriented, but I always have a few scoring goals (or outcome goals) on the books to look forward to.

This winter my two scoring goals were to shoot a 75 on a solid course and to shoot my age, 33, for 9 holes.  Today, I already hit one of my goals just a few days after writing it down and I couldn’t be more excited about it.

I shot a 75 at Columbia Edgewater Country Club (CECC) from the blue tees.  And, it was a solid 75, not one of those rounds where you putt lights out, but just a well played all around round with only one real mistake and a lot of good tee and approach shots.

The course plays 6,380 yards and is rates 71.1/137.  It’s not a particularly long track, but anyone who has played it knows that the tree-lined holes and tricky greens demand a lot of quality golf shots.  My previous best score there was a 77 from the black tees which play 6,800 yards, but in a lot of ways the course played longer today.  The high was about 55 degrees and we had 20mph winds that for some reason are always in your face.

It’s a respectable score on a respectable track and I’m so proud of the mark that I am keeping the ball for the first time ever.  I’ve aced two holes on short par 3 courses (90 yards and 80 yards) but didn’t bother keeping those balls, this one is different.

I actually arrived at the course without a golf ball in my bag.  I didn’t realize it until just before my tee time and had to run in the pro shop and ask teaching pro Adrian to “borrow” a ball.  I told him I wouldn’t lose it and would bring it back and he kind of chuckled and said he didn’t want a used ball, but I was determined to play 18 with it and that started me off on the right foot. 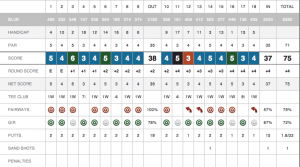 What I am most proud of is the finish.  When I made the turn at 38 I told myself to not focus on the score and to play shot by shot.  I’ve had plenty of rounds where I was even or a couple over after nine go south because I start thinking about scoring, but I’ve learned my lesson and know that premature thoughts of grandeur are a recipe for disaster.  Before approaching each shot I reminded myself to stay in the moment and focus only on the task at hand.  This actually works.  By telling yourself to stay in the moment it actually helps you stay in the moment.

The funny thing is that I think it was actually more stressful to play well than to play poorly.  When you are having an off round it stinks, but you know that as soon as it’s over it’s over and you can go work on the range.  When you are playing well and it’s deep in a round you have to work hard to not have sabotaging thoughts get into your brain.  Going into 16 at 3 over (my goal was to get to 16 at 4 over or better) I had to work hard to avoid thinking about pushing the ball OB or hitting it into the water on 17.

Teeing off on 18 I was 4 over and in a great spot to shoot my best round at CECC by two strokes.  My previous best of 77 was shot on my birthday this year.  I pushed the drive down the left side and was in thick rough stymied by trees.  I tried to hit a PW 130 yards from the rough over a tree but caught it thick and hit the tree branches.  I ended up with 80 yards to the hole and 3 strokes remaining to brake my record…  I hit my 56 and before bringing my head up knew it was a good shot.  The ball landed literally .5 inches from the hole; almost dunked it for a bird.  It rolled out just a foot and was an easy tap in for par.  75!!!

My my, how far we have come.

Trust me, I’m not going to make the mistake of getting ahead of myself.  I understand that these things can come in waves and as soon as you start assuming or expecting things to happen they will not.  I know that you have to respect every shot and that there will be times when the ball flies straight and times when nothing seems to work.  But, next time I have a lull in my progress/training, I will have this 75 ball on my wall at home to remind me that good things come to those who sweat and there are plenty of great rounds of golf left in the world.

Purely out of curiosity, what percent of golfers shoot a 75 in their lives?  I assume it is high as we all have good rounds, but can’t find any concrete numbers online.