Three posts ago I mentioned going to RedTail Golf Course to try out a handful of different hybrids as I had been strangely struggling with mine even though the hybrid used to be my go-to stick.

While on TrackMan, I tested every major brand that they had and found that my best “misses” came from the new Nike Covert Tour with an 80 gram stiff shaft.  I decided that it made sense to try it out on the course, but I didn’t want to spend the $230 it was listed for at RedTail so went online and found it at a  discount golf website for under $100 including shipping.  It was a deal too good to pass up so I ordered it and the new stick arrived yesterday.  It was listed in “used” condition on the site, but came with the original wrappers still on the club: 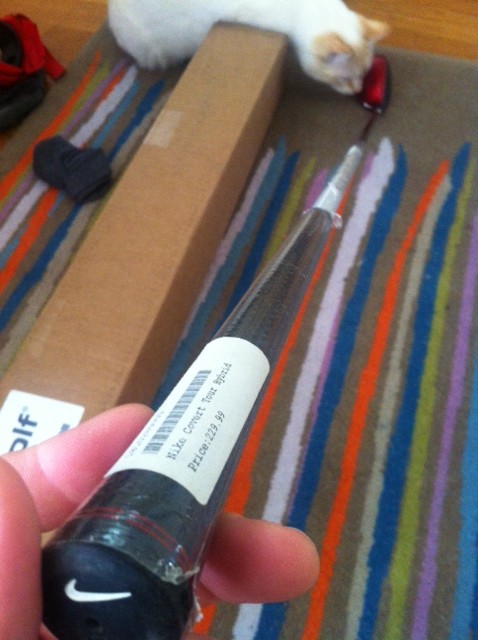 It did, though, have one tiny blemish on the top of the club.  Something that I would have eventual put there myself…: 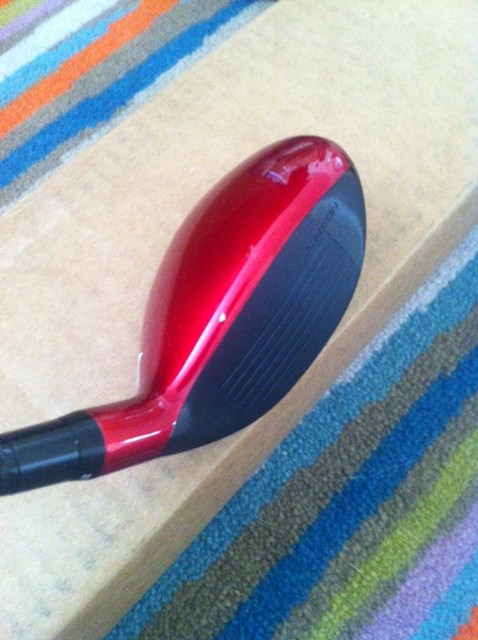 Definitely a steal of a deal and I’m interested to see if this change makes a difference in my 200-230 yard game as well as potentially adds some confidence in short par 4 tee shots.  I’m not saying it will or won’t help, but I’m going to give it a shot and see what happens.

To pay for this stick, I sold some golf clubs for the first time ever.  I posted one of my old Nike pro-combo iron sets (pw to 5-iron with Project X 6.0 shafts) on eBay and was interested in what they would go for.  All in all, after eBay took it’s cut, the irons sold for about $100, so it was a wash to trade the irons for the hybrid.

I truly hope this doesn’t spoil my potential relationship with Titleist.  I love my Vokey Wedges and AP2 irons as well as 913 driver, just have been struggling with the new hybrid.  I am sure there is a way to have it better fit my new swing and this is something I will talk with them about when I return to Oceanside in mid-January.  I do, however, want to keep it real and talk about what I am doing and right now I am exploring the world of the hybrid.  A club that I want to compare this Nike to is the Titleist 912U 2-iron.  As soon as I find one of those I will do a full comparison of the two.

Over the past few months I have been working with Axon Sports to assist in developing an entirely different approach to golf learning in a new golf training app.  We are focussing on imagery, imagination and visualization within the golf swing and the first version of the app is finally in my hands.  I will be testing it out and tweaking aspects of the user experience over the near future and am excited about this new tool.  It should be a game-changer down the road when it has been fully developed and a way for anyone to optimize their 10,000 hours.

To do it right, these things take a lot of time.  I will definitely be updating this process as it develops and will reveal aspects of the app when the time is right.

I’m very excited about this.