This weekend I attended an annual gathering of people interested/involved in human performance.  It is called the Interdisciplinary Conference of Human Potential (ICHP) and has been meeting once a year for about 18 years now.

I was invited last year, but the conference was in St. George, Utah and at the time I was not in a position to afford the flight, hotel and golf.  This year it happened to be in Orlando and since I was already in Hilton Head, just 300 miles north, I decided to make the drive down and meet the group.  I was also fortunate enough to get to present one of the days as well as attend all of the presentations Friday and Saturday mornings.

I left early Thursday morning, really early.  It was about 5am East Coast time, which felt like 2am due to my not-quite-acclimated Pacific Coast body, but I wanted to make it to Orange County National (OCN) in time for a practice round at noon.  The drive went pretty well and I arrived in time to hit a few balls before heading out for a round.

The practice round was on the Crooked Cat course with three ICHP participants and it was a beautiful course, as well as day: 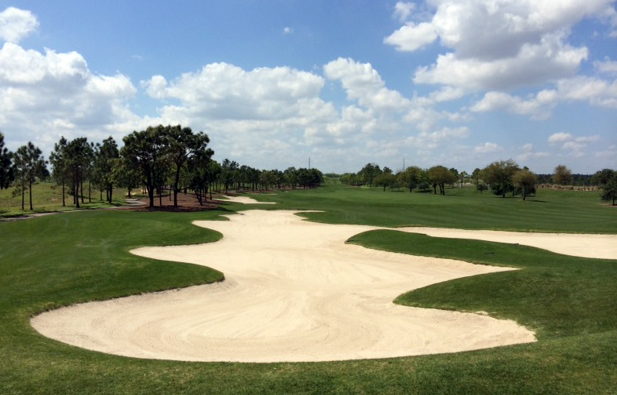 Such a refresher after the last few rainy weeks in Portland.  Glad to be in some sunny Florida weather, even if just for a couple of days.

The practice round went pretty well, was about 4 over through 15 holes, but then hit a wall of tiredness.  I think getting just a few hours of sleep and driving 6 hours then spending 4 hours in the sun and heat took it’s toll.  I doubled 16 and then bogeyed both 17 and 18 to card an 80.  But, I got a good look at the course and was hoping to play it again when the round really mattered over the next two days.  Much to my chagrin, though, the next two rounds would be played on the other 18 at OCN: Panther Lakes.

After that round UCLA psychologists Bob and Elizabeth Bjork arrived and I decided to go out and play the Tooth course with them.  Harvard psychologist Dan Schacter joined in and we had just enough sunlight to play this 9 hole par 29 course: 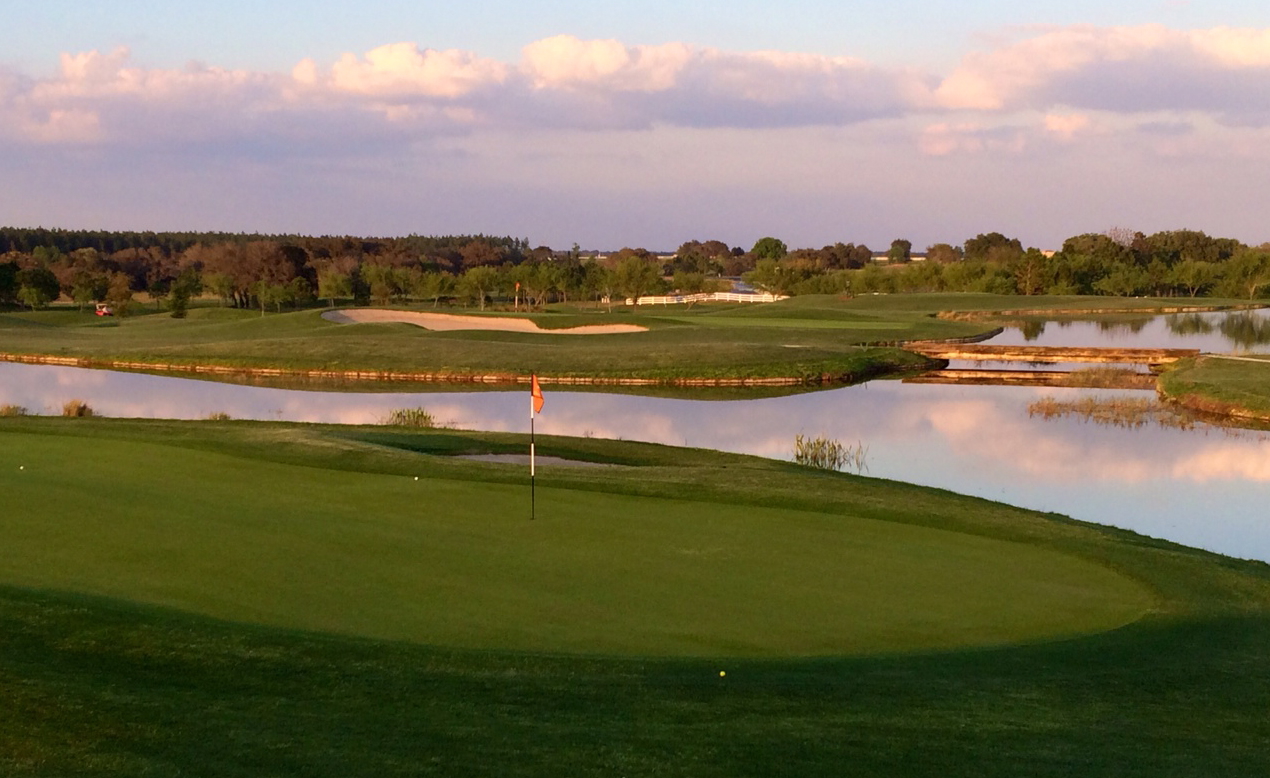 This was an awesome course to practice the short game.  If I happened to live near here I would spend many a days fine tuning the wedges on this track.  It’s basically a wide open field with water hazards, sand traps and 9 unique greens.  The holes play from 60 yards to 300+ yards.  I hit it pretty well as the short game is my strength and shot even par my first time around this short course.

After the drive and playing 27 holes it was about 8pm and my entire body was shouting for me to end the day.  But, the day wasn’t quite over yet as a small group wanted to go have a putting competition in the dark.  I couldn’t pass up this opportunity no matter how tired I was and joined in the nighttime fun.  We rolled the ball on the Bermuda grass greens under a simple floodlight and a bit of shine from the moon for an hour and then I had to call it a day. 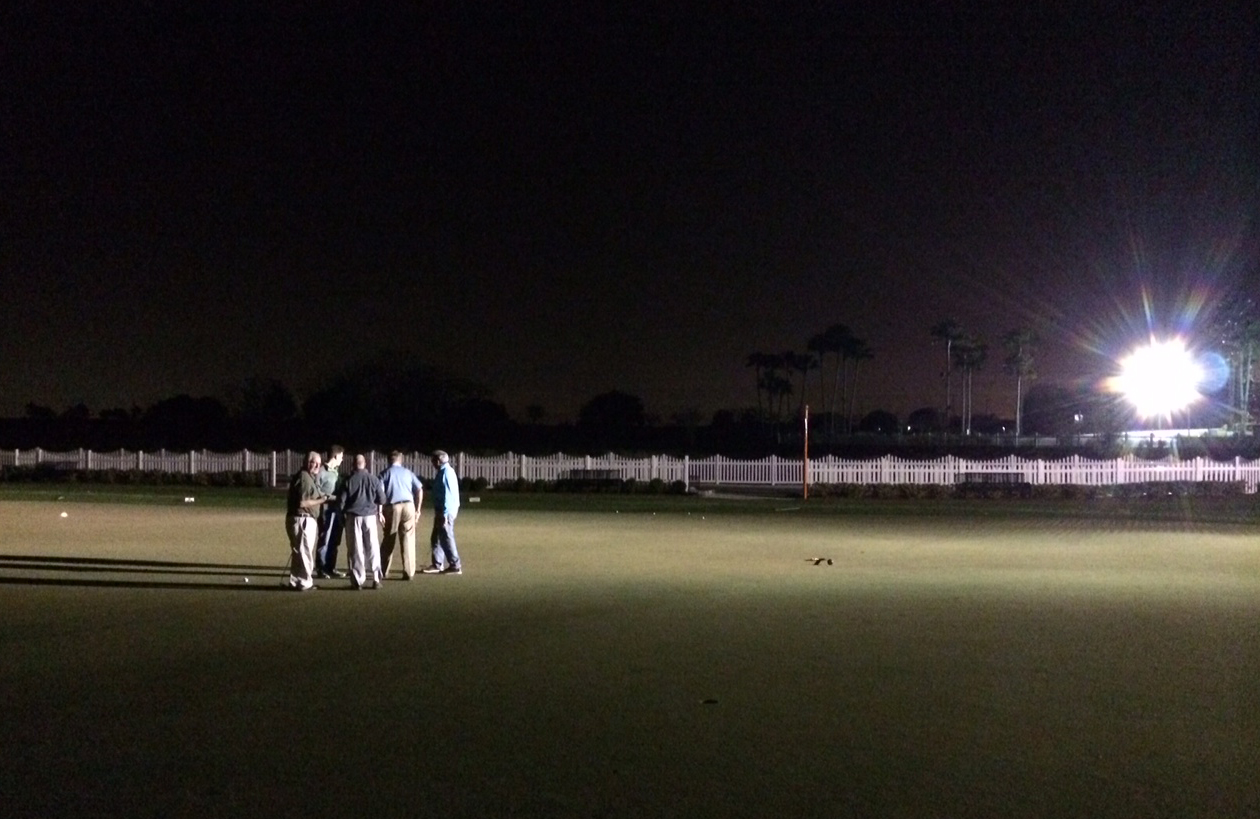 The next morning the 24 participants of this year’s ICHP congregated in a meeting room to listen to a few presentations.  They were all interesting and inspiring.  This year it was kicked off by University of Illinois Professor of Psychology Aaron Benjamin who presented research on the difference between blocked, random and “increasing” practice: 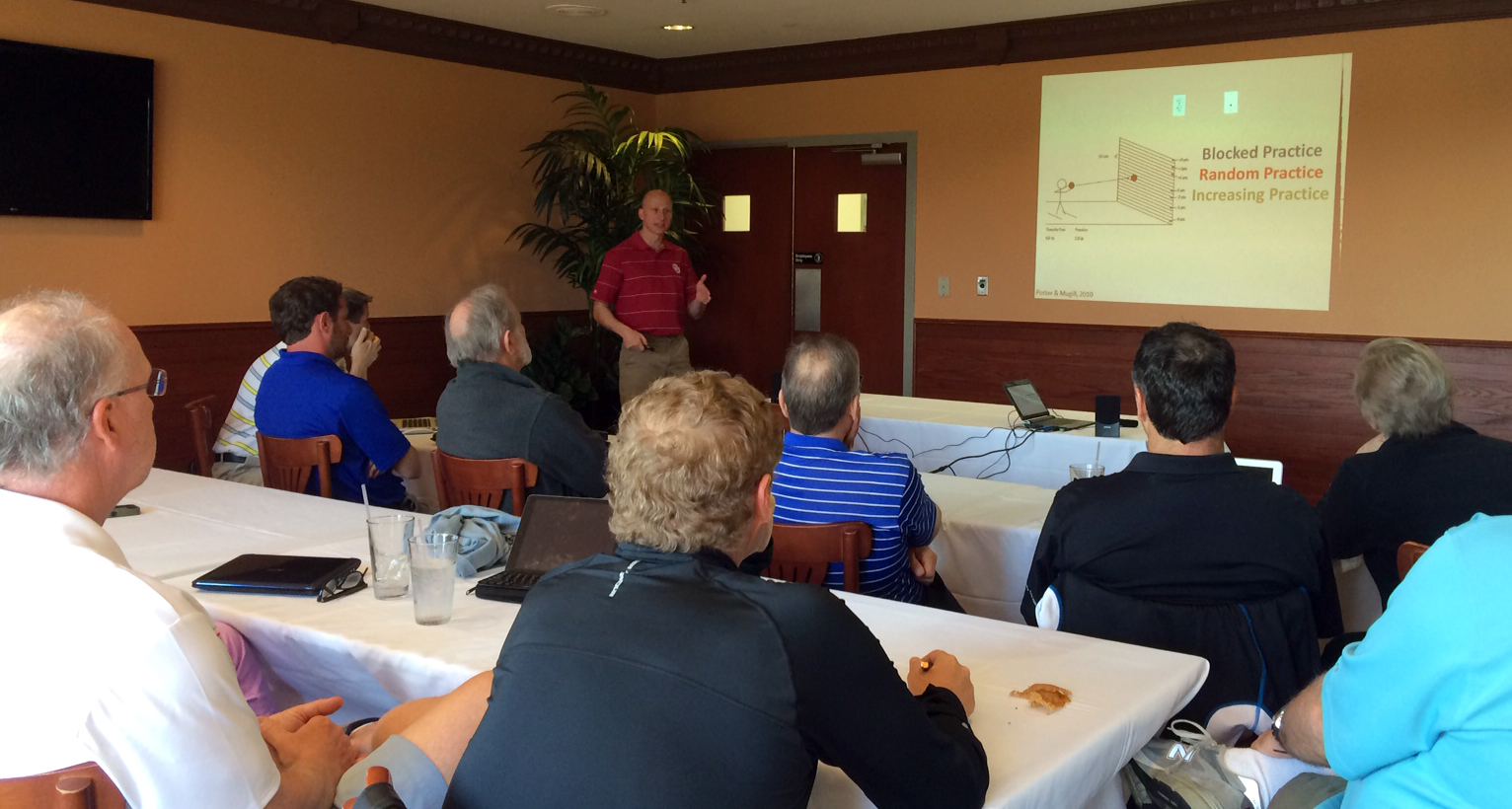 I wanted to know more about Aaron’s research and left his, and everyone’s, talk wondering how I could best transcribe/translate this type of presentation into my blog. It’s a tall order considering each of the weekend’s 8 presenters can have years of research backing up their 30 minute talk and for me to assume I can sum it up in a paragraph or two is a bit outlandish.  There is a lot of value here for anyone interested in human performance and I have been considering a lot of different ways to get this content to my blog’s readers.

What I have decided is that I need to start recording Skype conversations with all of these amazing people I cross paths with throughout this journey and posting those on this site. It’s the only way to appropriately and realistically capture the true essence of their work without me muddling it up through a poor translation.

The next non-golf goal, then, is to figure out how to record a Skype conversation and set some of these up.  There are so many incredible people out there that can help us all.  I have met countless potential resources over the past 4 years while trying to find the best sources in the human performance realm to assist me with this journey and would love to share these with everyone.

After the talks we went out and played OCN’s other course: Panther Lakes.  It was a strange day ball striking wise and it took about 6 holes to realize that I had reverted on my old takeaway which was causing some erratic drives and iron shots.  The course was beautiful and the day was lovely, but I just didn’t play well.  The game that day was a four-man team game and one of my partners had the round of his life, but unfortunately I didn’t contribute much and we ended up coming in second by one stroke.

The next day five people gave talks in the morning and then we all went out for a shotgun start on Panther Lakes.  This day the competition was for individual gross and net scores and I was determined to hit the ball better.  Playing a course for the second time is worlds different than seeing it for the first time so I had some local knowledge of where to aim and where not to let the ball end up which helped immensely.  The previous day I hit a few shots that I thought were in position A just to find out that the ball was blocked by a tree or had rolled into a hazard.  This time my aim was more purposeful and it made a difference.

Round one on Panther Lakes I shot an 86 and it was a dirty 86 marred by errant drives, missed greens and a couple of lost balls.  This time around the ball flew better and greens were hit with ease.  I still hadn’t figured out putting on Bermuda grass very well and had 3 3-putts as well as 35 total putts, but shot a 76 which on a windy day was good enough to win for low gross.  In a way it was my first competitive win involving more than a foursome, something I just realized while writing this blog.  That’s pretty cool.

The day was drawing late and I still had to drive back to Hilton Head so I said my goodbyes to the group and hopped in the car for the drive back up I-95.  It was quite the trip and my only regret is not being able to summarize the presentations.  This will have to wait until we can hear it from sources themselves.

Now I’m back in HHI and back to practice, definitely going to get to work gaining experience with Bermuda greens and chipping off of these surfaces.  Please remember, if you want to support the plan and happen to purchase on amazon just click through the link on the right and purchase anything you want.  A small percentage goes towards supporting The Plan.  Thank you!