I added one more golf ball to my “keeper” rack this week.  It’s the fourth ball to date that I have saved since starting to keep my milestone balls back in October when I shot a 75 for the first time.  I like the idea of slowly building a large collection of performance memories and wish that I had kept balls from day one, but it’s never too late to start and I have a few good ones already.

To date, they are from shooting my first 75 and 74 as well as one from dropping three birdies in a row.  The newest addition is a keeper based on just one hole.  It’s the first time I’ve knocked in an eagle on a par 5:

(on a side note, it’s hard to write with a sharpie on a golf ball while walking..)

In the past I have had a handful of attempts for eagle from roughly 12-40 feet of putt, but had never dropped one on a par 5.  Very early in 2012 I knocked in a 70 yard approach shot for an eagle on a par 4, but kept missing my chance on the par 5s and didn’t get another one all year.  (For the non-golfers out there, an eagle is 2 under par, or one stroke better than a birdie.)  I like starting 2013 with an eagle by the fifth day and hope that means many more will be coming this year.

It was almost an albatross, which is three under par and perhaps the rarest of golf scores outside of acing a par 5 which only happens with hurricane winds and a world of good fortune.  Almost doesn’t count for anything in golf, though, but watching the approach shot fly and stick so close to the hole was pretty great.  It landed about a foot short and just stuck the green from 190 yards out: 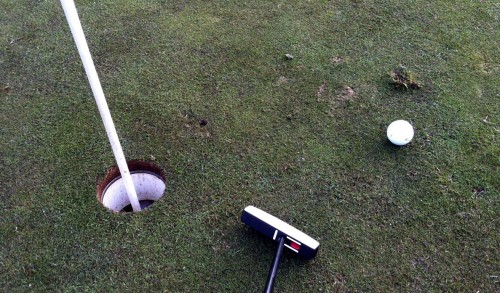 Nothing like a tap in eagle for the first one

The entire round was pretty crazy.  A regular golfing partner, Country Club (CC), and I were playing for “best golfer of 2012″ honors and neither of us were playing our best round by any means but there were some quality holes mixed into the mess.  Here is my scorecard: 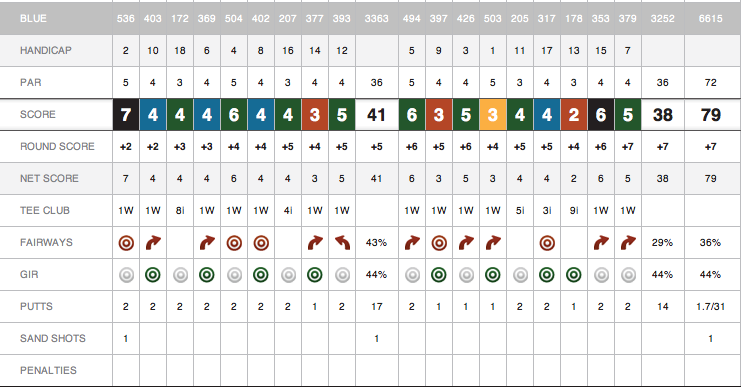 We actually played the back first and as you can see it was erratic out there.  I missed a lot of 4-6 foot putts on the tundra-esque turf conditions.  The greens were in the midst of thawing out, but about a half inch below the surface were still rock hard. It was a different type of golf all together as you didn’t know if your approach would stick the green or bounce ten feet high.  Putting was a challenge in that you had to hit it hard in the middle of the cup to keep the ball from bumping off line.  All in all, I played decent, but made some awful mental mistakes on two holes for double bogeys.  On the 17th hole I tried to go over a tree that I had no business attempting a shot so high and on the 1st hole I punched out from behind a tree without taking a look at where I was punching to and mistakenly hit it directly behind another tree.  Silly lazy mistakes that quickly add strokes to a round.  On the other holes, my big miss was the driver. When it was off it was really off.

The end result?  I was up by 4 at the turn then gave away a lot of strokes.  We were tied on the 17th hole (8th hole on the scorecard) which I birdied and he bogeyed.  Going into 18 I pushed my drive into the trees and had to punch out, he hit his down the middle and then landed just shy of the green.  I hit the green in 3 and then made two putts for a bogey whereas he made par on the final hole.  But, my 79 was good enough to take the match by one stroke giving me 2012 honors.

One match can swing either way and I don’t want to come off like a braggart in talking about a victory, but there is a backstory and a small milestone in this win.

I’ve played with CC since pretty much day one.  We met on the putting green of Heron Lakes and we used to challenge each other in putting games when that was all I did, then we started having up-and-down matches when I finally got a PW for the first time back in September 2010.  As I moved back our friendly competition followed.  At the onset of 2012 when I came back from Georgia with a full set of clubs we would play match-play rounds where he gave me four pops a side.  That progressed to 3 strokes a side, then 2 then 1 and finally we started playing straight up.

CC is currently a 1.9 handicap and was a low of .2 in 2012.  He has a great short game and can score on any hole.  During this particular match he wasn’t playing up to his full ability, but nobody does every day in the game of golf.  I wouldn’t even consider saying that I am better at golf than him in any way, but am happy that my game has gone from needing 8 strokes a round to tie him to being able to take a solid golfing friend down without any strokes.

I’m sure there will be a ton of rematches in 2013 and the tides will swing as they do, but knowing that I can compete at this level is a huge mental boost for my game and a great stepping stone along the way.

2012 was a big moving year and I predict the same for 2013.  I’ve just started working more hands on with Dr. K Anders Ericsson and we have some exciting ideas about tracking progress via TrackMan data that when finished should be able to scientifically demonstrate ways to improve anyone’s game.  A lot more of that to come as the ideas develop.

Speaking of TrackMan, a new stats sheet has been posted in the Statistics page of The Dan Plan: http://thedanplan.com/blog/?page_id=36

24 Responses to "Momentum and another milestone"