First thing first.  The rain finally broke and we had some amazing crisp Fall days out there over the Thanksgiving weekend.  I love the Fall colors and light.  From a photographers point of view, this is the best time of the year to capture some great images.  I always have a phone in my golf bag and when I’m struck by a scene while on the course I like to capture some images.  this is one of my favorite from the weekend: 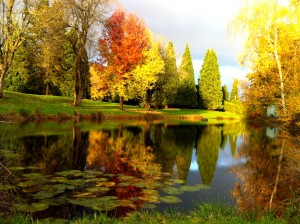 When the light is this nice you can’t go wrong.

The practice was equally as nice over the past few days, although I’ll be the first to admit that it has been a frustrating swing week.  Sometimes when you focus so much and spend hours upon hours thinking about something so theoretically detailed as a golf swing you can overwhelm yourself with analysis.  I realized today that has been happening.

I made the mistake of trying to change too many aspects at once and because of it lost my way for a bit.  The bad news:  I was standing over the ball thinking “ok, swing back with both arms, don’t hinge the wrists too early, keep my trailing elbow tight in, turn my hands over during the swing, keep my head behind the ball, swing with my arms, extend my trailing arm through the swing, hold the finish.  Ok, now swing.”  I can tell you right now that having a long list of “dos” leading up to the actual swing is a recipe for disaster.  I had forgotten one of my oldest lessons, which is to focus on one swing thought at a time.  I hadn’t broken down all of my adjustments into manageable chunks and it was causing me in frustration during practice and play.  The good news: I played two extremely off rounds over the past two days where I wasn’t hitting any fairways and my irons were horribly askew but shot in the low 80s (82, 81) on both of them.  I think there was a combined 10 greens in regulation during the 36 holes, but chipping and putting saved strokes.

I don’t plan on scrambling my entire golfing life, although knowing that you can play decent when nothing is going the way you want it is good news.

Speaking of putting, two new putters arrived today and I’m excited to get them out there and sink some putts.

The company is called SeeMore and they are straight up milled steel putters that have a good feel and look.  To date, I have only used three different putters in my life, and to be honest I have never had one that I loved having in the bag.  I know that I am a good putter and am confident putting, but haven’t had a flat stick that felt right.  I’m not going to assume anything about these, but am going to give them a real solid field test over the next couple of months to see what I think.  When making an equipment switch, it’s important to allow for an adjustment period, so I will stick with them for the foreseeable future and see what happens.  Hopefully I’ll be seeing more putts drop

My current putting stats, and all stats, have been updated on the statistics page:  http://thedanplan.com/stats.php   Over the winter the plan is to drop the putts per hole to 1.8 and putts per GIR to below 2.0 on average.

On TrackMan news:  It has been a computer fiasco getting everything up and running with my laptops.  I was trying to load it on a two-year-old Dell we had at the house that met the minimum system requirements for the software, but after downloading it and testing and ordering a new battery, TrackMan support and I realized that it was too slow to run and the software kept freezing the computer.  So, we decided to use my mac laptop and run Windows through Bootcamp.  To do this, I updated the OS to the most current version and ordered 4 gigs of Ram and a copy of Windows 7 64 bit to run on it.  I finally received Windows in the mail yesterday and partitioned my hard drive via Bootcamp to load Windows on the machine.  The Windows disk wouldn’t load and after an hour of cruising google for answers I realized that 64 bit software works on Mac Powerbooks made in January 2008 and later.  My machine was from November 2007, so missed the 64 bit cut-off by two months.  I called TrackMan support and we chatted for a while about solutions and finally realized that he had a copy of Windows 32 bit that he would trade me for the 64 bit copy I purchased.  So, he’s going to mail me the 32 bit tomorrow and hopefully that will load on the laptop and I can get that awesome machine out to the range.  It was kind of a long story, but will be up and running soon and the stats will be posted soon thereafter.