Last April, I travelled to Oceanside, CA to get fit for a new set of Titleist golf clubs.  It was a great experience that I wrote about on this website and for golfwrx, but happened during a transitional moment in The Dan Plan, so I found myself back there just 9 months later for an updated fitting.

To start, I would like to mention that these fittings are open to the public and are a great experience.  For more info, check out their website here:  http://www.titleist.com/golf-club-fitting/

In May, 2013, my original Titleist clubs arrived almost exactly as I began working with my current swing coach, Bruce Furman, who has been helping me make large changes to how I handle a golf club from tempo and transition to swing-path delivery, so much has changed since that last fitting.  Typically, someone would not have a full club fitting twice in one year, but when you are building a new swing and making large changes an exception needs to be made.

This was highlighted by a joke in the facility when I arrived.  “You’re back already?” a couple of the fitters chuckled.  They all remembered me, which was nice, and were kidding around with how soon I had returned.

I arrived early and was in the waiting room with a PGA Tour rookie, Kevin Foley, who had not been fit for clubs in about 18-24 months.  Kevin, though, had been playing on the Web.com tour and then the PGA Tour and was not making drastic changes to his golf swing so didn’t really need to have his sticks looked at during that stint.  I was on the opposite spectrum and the clubs that had arrived in May were potentially in need of some changes.  Also, since I was already in the desert just 2 hours away from Oceanside it made sense to stop by now rather than fly down on a separate trip in the next few months.

So there I was, sitting next to a PGA guy and a +5 handicap college golfer ready to get out to their range and see what the pros had to suggest.

To start, here is a photo from the last fitting.  It’s hard to completely tell by this angle, but my swing was super flat and completely different than it is today: 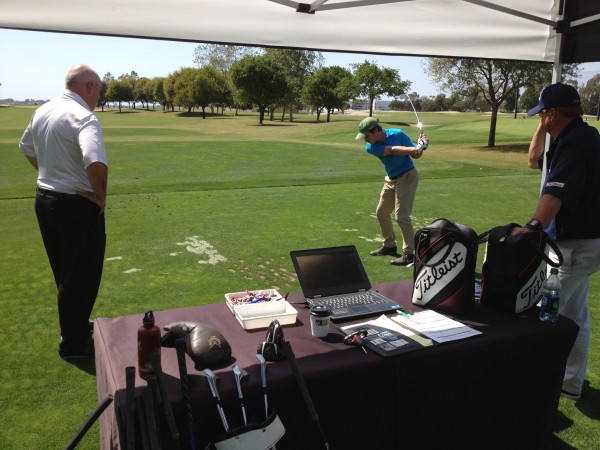 Back then, the guys put me in some long sticks that had x-stiff and tipped shafts in them that they hoped would limit club torque in order to keep the ball more in play.  As my swing changed, though, the x shafts were borderline too much club and limited my feel during the swing.  For me, this made it hard to get out of the box and I had been struggling with the driver, 3-wood and hybrid throughout the summer and fall after my swing changes.

I wanted to look into those clubs as well as my wedges since my short game had improved/changed and I felt that the bounce of my first set of Vokeys was not optimized for how I now delivered the club.

This is all pretty technical, but the gist is that after months of working on my swing I was ready for a few new clubs that could potentially suit the new swing better and enhance my on-course performance.

This time, I had a different fitter, Steve Ziff:

Steve has been at the facility for 14 years and was great to work with. The first step was measuring my current sticks to make sure the loft and lie had not changed after thousands of swings.  For the most part, everything was spot on and we were ready to go.

We started with wedges.  I currently use a 46-08 degree (instead of a pitching wedge), 50-08, 54 TVD and 58TVD.  The 46 and 50 are probably my favorite clubs and when I told him that he said he didn’t want to mess with them as “if it works well, keep it in the bag.”  We began with the 54 which I had all but taken out of my bag because on short shots it always seemed to grab the turf before the ball and the shot was either a little fat or a blade.  I thought this meant that I needed less bounce, but after discussing what the bounce does and how it interacts with turf he encouraged me to try a range of clubs with all sorts of bounces until we finally found one that was pure gold.

It ended up being a 54-14 with an M grind which has a larger bounce to help the club glide through grass.   We new it was a winner as the shots were much improved from full swings to 5 yard chips.  The same happened with the 58 degree and we went with a 12 bounce M grind on that.  After hitting on grass he took me to a bunker and had me swing my gamer sticks.  I’ve always had to hit it pretty hard in the bunker as my swing/club tends to dig, but with the new wedges I was taking easy little swings and the ball was flying out towards the pin and one-hop stopping.  It was great!

In total, he worked with me on wedges for a little over an hour until we found the right 54 and 58 then were ready to move on to longer sticks.

The irons have always been solid (AP2s with KBS Tour shafts) so we didn’t even look at those this time around as they are pretty standard lie and loft and are not causing me lost strokes during the round.  But, anything longer than  a 4-iron has been a struggle over the past year and I was interested in seeing if he had some suggestions for the hybrid to driver.

Driver was next.  My arch nemesis.  I have played around with so many different configurations, shafts, head weight, etc but could never find something that felt right.  It has been perplexing and I didn’t know if it was the swing I was using or if the gear was not suited for that swing.

This is an entire story altogether and I will approach it in the next blog.  For now, I have my final desert lesson with Bruce in an hour and need to get to the range and warm up. I have some new sticks to show him and hope to develop a game plan for the coming months until he returns to Portland.  Off to the lesson!

Footnote:  Please remember that if you need/want to purchase something from Amazon to click through the search link on the sidebar.  It’s a great way to support the Plan as a small percentage of anything purchased on Amazon goes to helping the project stay afloat.  Thank you.