I do apologize about not having a new post up here for quite some time. It’s been a busy week and this is the first chance that I have had to sit down for a minute to write.

Before I start, I am very excited to announce that both Criquet Golf Shirts and Seamus head covers have teamed up with The Dan Plan to bring some awesome gear to the table.  You can now purchase a Dan Plan golf shirt and Seamus head cover and the proceeds go to helping The Dan Plan continue.  Please check out both awesome items here:  http://www.criquetshirts.com/the-dan-plan/  and here: http://www.seamusgolf.com/collections/special-run-1/products/the-dan-plan
support The Plan and get something awesome in return. It’s a win-win!

I returned from Blair Academy in Blairstown, NJ late last night after a couple days on the east coast where I presented The Dan Plan to some amazing students.

The goal of my presentation was to go there and try to inspire some students, but I quickly realized that I was the one who was going to leave inspired.  Things seem to have changed since I was in high school and non-chelance or apathy were nowhere to be seen.  Everyone was involved in activities and seemed legitimately interested in learning.  It was a great experience.  The campus was beautiful too, with a lot of historic buildings dating back to the 1800s when the school was established: 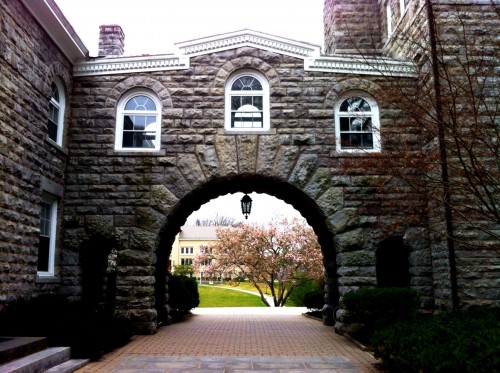 It helped that this week was the first week of Spring there and everything (people included) was buzzing in the warm sunshine.

The presentation, as far as I could tell, went very well. It was voluntary to attend and a good sized crowd turned out to hear me speak: 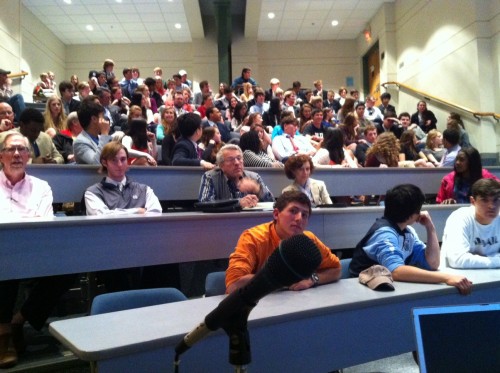 Nobody really likes to be in the first couple rows, I had to coerce a few to come up front to keep me company.  It was a good turn out and after the, roughly, 40 minute talk we opened the floor for a Q&A that had to be cut short by the teachers or I think we could have sat there and talked all night.

I was debating posting my lecture notes, but think that I will keep those for another day.  There is more to cover from the past week so I will stick to ongoings.

While there I got to spend some time with the golf team, although not very much because they had a match to go to, and had a great time walking their 9-hole course with them and talking about practice methods.  The course was incredible, too.  Who knew New Jersey was such an aesthetically pleasing part of the country!  I think this must be a secret..  Here is a short video from the second green:

With nobody out there it’s great to drop balls all around and practice some short game with different style grass and crazy lies.  I had a ball out there yesterday practicing for a couple of hours.  I hope to make it back there one day soon.  Visiting Blair made me realize that there are countless amazing places around the world that I’ve never even imagined.  It may be impossible to see them all, but I know that The Dan Plan will be taking me on new adventures both on and off the course and this is just a taste of things to come.  Never underestimate what following your dreams can do for you.

One of the main aspects of my talk is that it’s never too late to pick something new up.  The day before I flew to Blair I was out on the range at Columbia Edgewater and saw my coach giving lessons to a man named Lou.  Lou is 97 years old and is still working on improving.  This is, for me, incredible and I hope that I am as determined and positive as Lou in 64 years. 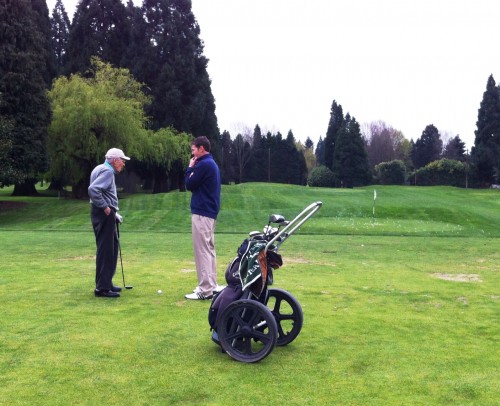 Whether it’s a hobby or a life goal, keep grinding away.  If Lou can do it we all can.  He will be out there taking lessons when he is 100.

In other news, the tournament last weekend at Langdon Farms went pretty well.  Here’s a Where’s Waldo style image, can you find my name?  I’ll give you a hint, it’s right around the middle of the picture.

I played about 12 holes very well, but had a rough start of the day and a couple silly misses on the 16th and 17th hole that kept my score up, but all in all it was the best number I have shot to date in a tournament setting:  80.  I had 2 birdies including one on the 18th hole which helped.  The first hole was rough. It was under 40 degrees and into the wind and I pulled my first drive on the 430 yard par 4 into a church pew style bunker that landed in a spot where I didn’t have a shot: 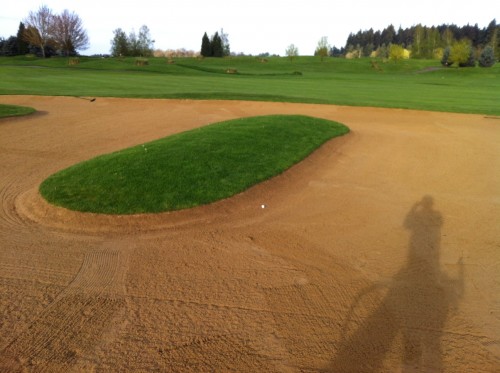 The hole was to the left of this image so the only thing I could do was punch it out backwards then had 197 into the green.  All in all it wasn’t too bad of a hole, but set the tone for my driver. I, again, didn’t hit that stick well and ended up with just 3 fairways hit (those three holes I played at one under in total) and hit one OB on a par 5.  I realized during the round that it wasn’t so much my mechanics as it was my confidence that was causing the extreme misses.  With the same driver I had hit 9 fairways the day before and 10 two days prior. I went into this tourney actually hitting the driver better than ever but once I teed it up in competition my doubts from past performances creeped in and I got tense and forced the misses.

The aha moment I had was that confidence with the driver is my biggest weakness in a tournament right now.  The way to change that is to build up the confidence and instead of recalling all of the past misses I need to focus solely on times where that stick has been successful.  That and hit it tons both on the range and in practice rounds until I know that I can hit it well.  It’s a process but now that I have identified the problem it is easy to develop a plan of attack for moving forward.

All of this reminds me of a quote that I read last week: 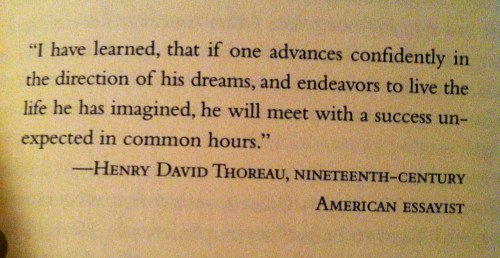 Back to practice for me.  Next tournament is coming up in a couple weeks and it’s time to build that driver confidence.  Also, next week I am returning to Carlsbad, CA to do a full club fitting at Titleist.  I was so impressed by the wedge fitting that I had to return for the rest.

6 Responses to "OMG, where does the time go?"