Over the past week I have been visiting with my family in South Carolina.  For the first few days I was seeing my brother (visiting from another country) and his daughter as well as catching up with my parents; but yesterday and today I went out and tried some courses here.  I was kind of surprised as I thought they would be super expensive in this vacation/resort type of town (am on Hilton Head Island), but I found some amazing deals on EZlinks that had me playing a Davis Love III course for 20 bucks and Pinecrest Golf Course for 15 dollars.  Also, tomorrow I play another 7,000 yard course for just $23.  Very good deals and plenty of other options to choose from for Sunday and Monday before I head back to Portland.

My goal was to use this trip as a refresher course for how to best play shots from and on Bermuda grass.  It was a learning experience, as always, when transitioning from bent grass to bermuda, but I did pick up a few new ideas and began to see how this type of grass affects the club going through the ball.

One of the more interesting aspects is that they were in the middle of over-seeding here, which means that they planted ryegrass seed to replace the bermuda that goes dormant over the winter months.  I didn’t know anything about this until yesterday, but apparently the bermuda goes dormy for the season and they then seed the entire course with ryegrass to grow in for the winter months.

That process seems similar to how the courses in Portland punch their bent grass putting greens this time of year.  It’s not the same, but the overall condition of the course is pretty similar in that it’s unpredictable.  I suppose October is the best weather month across the country yet the month where golf courses do their worse to the playing conditions.  But, it’s a great time to get some deals as I did and really enjoy playing some G.

How the over-seeding affected play was that the fairways had been waterlogged by the sprinklers so every shot plugged even though it’s been 75 degrees and sunny here for weeks.  And, on the putting greens there were two different grasses which in the afternoon had grown at different rates and long putts would fishtail their way towards the cup making it kind of a crapshoot as to where the ball would end up.  Add to that the fact that I have minimal experience putting on grain and you get some 3-putts where at home you were thinking birdie all the way.

It was totally different.  From the humidity to the constant ponds and alligators to the grass, everything was different and needed a new thought process going into each shot. At times I thought my ball was buried and I needed an extra club, but the thinning almost dormant Bermuda grass proved to create flyers and the needed club was 2-down.  Then I would club down and hit out of a thicker chunk of bermuda and the club would catch grass and come up a few yards short.  Each shot from the rough was a learning experience and by the end of the second round I started to get more familiar and have a good idea what would happen depending on the depth and thickness of the rough.  It was different than Portland rough, but neither was more or less difficult.  Once you familiarize yourself with the conditions a similar score should be shot at each place.

The putting green was where the biggest differences were noted.  As mentioned, the ball just seemed to fishtail all the way to the hole regardless of how well you hit it.  Both days nobody made a birdie putt from longer than 5 feet and I am not certain I saw a putt drop from longer than 8 feet over the entire 36 holes from anyone on my 4-somes.  I just felt like nothing “acted” right around the green, but deep down I know that it’s just from not having full experience with these condition.  The difference between putting with the grain and against it was pretty dramatic.  Only problem is that I am not, yet, good at reading which way the grain lies.  This is something that I need to work on if the future holds much Bermuda grass.

Here are some photos from the first few days.  totally different than the Pacific Northwest:

This was my first tee shot look. Very luscious and pretty tight all in all, although the trees usually didn’t have OB signs and you could find your ball and punch out if you missed the fairway.  It felt a bit like a jungle on the tighter holes.

Thin grasses and plenty of water features.  Every lie was interesting as it demanded a specific attack on the ball.  This was the 18th hole of Pinecrest and after a solid drive I had around 145 remaining.

The 9th hole of Pinecrest.  Was not too happy to end up in the fairway bunker, but a little 7-iron made it to the green 160 yards away.  One thing I realized is that you have to club down when here.  What flies 150 in Portland seems to go 160 here. 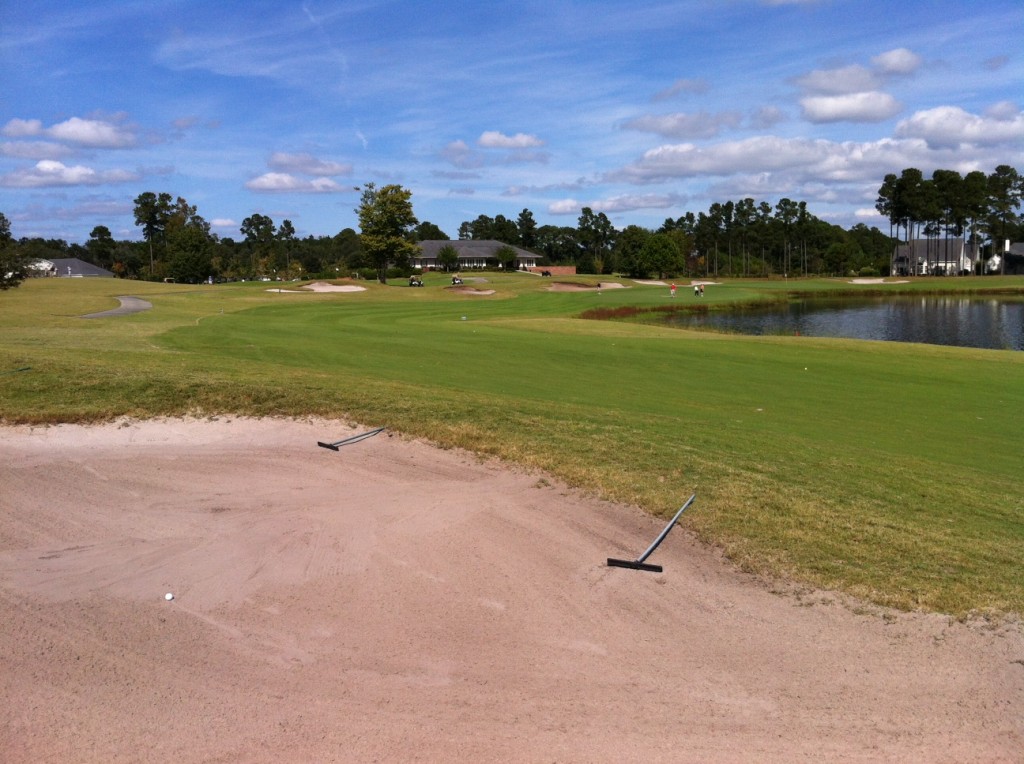 Everything about this shot is different than what I have been acclimated to.  Fluffy bermuda grass, ponds with alligators, thick humid air and generally nice weather.  All complete opposites to Portland. 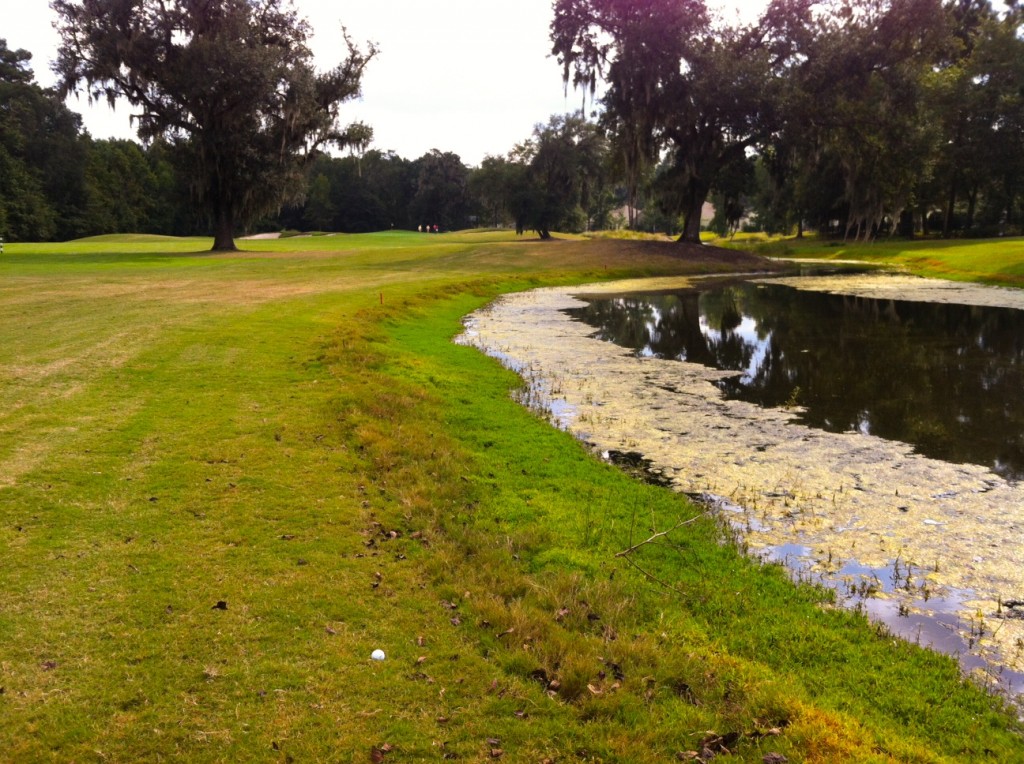 I shot an 81 my first round and an 82 my second.  Both days were cursed with hybrid shots hit OB or in the water and again solidifies my lack of faith in that one specific club.  This if for an entirely different blog, but I am thinking about getting a driving iron to replace my hybrid.

In the meantime, HHI golf is pretty amazing and bermuda/ryegrass greens and fairways are completely different.  It’s just something to work on and practice.  When fairways are hit it doesn’t matter so much, but the short game and putting is markedly different and extremely interesting.

5 Responses to "On The Road; Hilton Head, SC golf"