I was invited up to the US Open at Chambers Bay on Thursday specifically to be on SkySports for a few live TV minutes, watch the short interview here, and of course stuck around for the whole day to watch some action.  It’s not every decade where the Pacific Northwest gets a golf major (or a PGA Tour event in general) and I wasn’t going to pass up the opportunity to view some great golf about 2 hours from my Portland home.

For the most part the tournament was as people were/are complaining:  not exactly a spectator friendly venue, but once I got the lay of the land I found some great spots to watch specific action.  It was a different experience than other courses I have attended events at, but that doesn’t necessarily mean it was a bad thing, just different.  They had grandstands on almost every hole and instead of following a group for the entire round you had to pick your hole and watch a handful of groups pass by.    In some ways it was nice, but I think people who attend a lot of these things are used to picking their played and following for a 9 or 18 and this course is just not laid out for that.  In my opinion, Chambers was built to be played, not watched, and it was built quite well right along the Puget Sound: 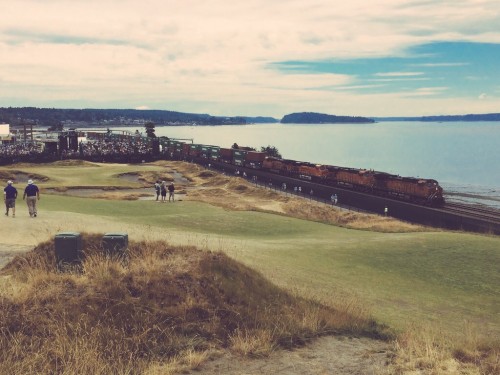 Plenty of amazing views with a the entire course winding through treeless (well, there’s one tree) sand dunes and a few holes right along the water.  The two things that struck me the most about the course when I first saw it were the bunkers and the undulation of the greens (which is very hard to photograph with a phone at a place where you aren’t supposed to take photos): 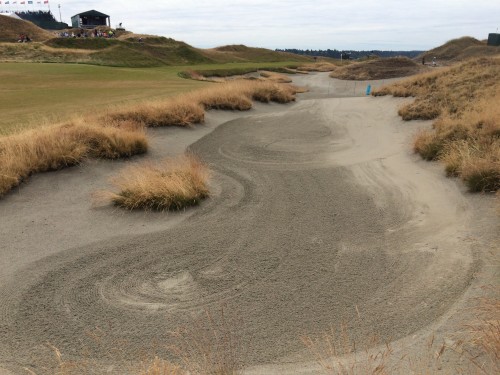 All in all it’s a fun course built on an incredible piece of property, which used to be a rock quarry.  It is a great test of golf skill as you have to both strike the ball well and putt incredibly well in order to score here.  I can’t wait to see what will happen come Sunday afternoon, it is going to be a tight race, as majors should be.

I can understand a bit of the gripping, though, as on some holes this was about as close as you could get to the action if you didn’t want to sit in the grandstands:

That shot was taken while watching Tiger finish his Thursday round.  He hit a great iron shot up this huge hill of a par 3 and, I believe, 2-putted for his par.  I also got to watch Spieth play this one and even though he left it short left in a treacherous bunker he made a great sand shot and saved his par.  Such a great player to watch.

Last note on Chambers, it was definitely the dustiest golf tournament I have been to: 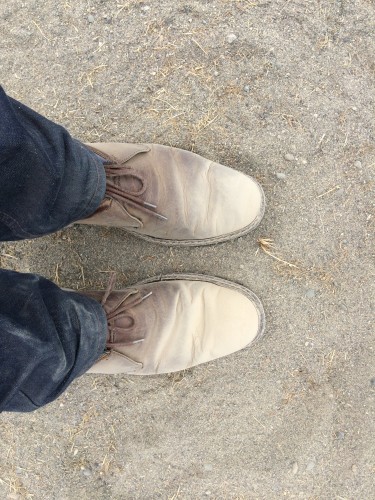 I suppose black jeans and leather boots isn’t exactly the most appropriate attire for a sand dune golf course anyway, so my bad.

The next day I had some friends in town from Texas who had booked a round at Gold Mountain, which I had heard was a great track just north of Tacoma.  I had been wanting to play that one and The Home Course for some time now and since I was already up there it was a perfect time to knock one of them off of the list.

The course stood up to everything I had heard about it.  It is a fairly stark contrast to the sand dunes and water lined Chambers track, but tucked in the wilderness near Bremerton, WA this course winds through tall pines and seems to have some elevation change on every hole.  We lucked out and had a perfect weather day, too: 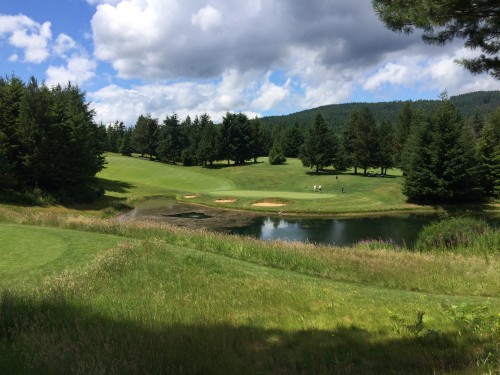 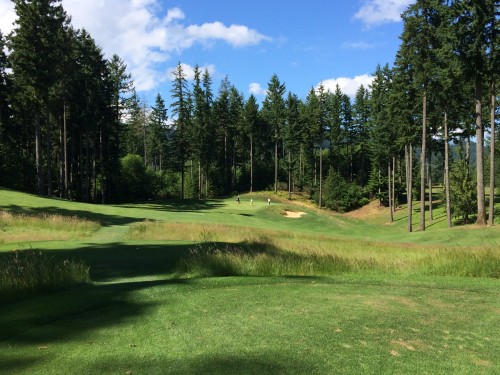 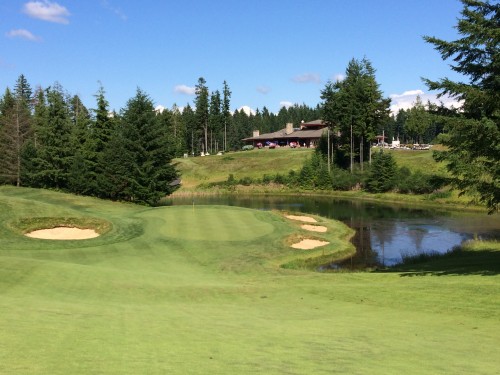 I arrived 1.5 hours early as I wanted to be very diligent in warming up.  I hadn’t played a full 18 holes in more than two months and ever since trying, unsuccessfully with anything beyond a 3/4 swing, to swing a club in Chicago in mid-May I haven’t even attempted a full swing.  It had basically been mid-April since I made a full swing at a golf ball.  I was a little nervous, but mostly just wanted to make sure to not overdo it.

Starting with quarter swings and then slowly moving up to a half swing everything seemed in line and good.  I noticed that there was absolutely no pain when I stayed very connected and had good tempo, so in a way pain was my teacher.  Three quarter swings were also going well so I made some slow-ish full swings at the ball and, again, as long as the tempo was smooth pain was not present.  It was very encouraging, although when I tried to accelerate my lower body and got a little separation between lower and upper I felt that sharp pinch in the lower back.

I figured I could enjoy the day and make 3/4 and slower swings at the ball and at least get out and play some golf, finally.  The longer the club the slower/smoother my tempo needed to be in order to avoid the pinch, so I just focussed on solid contact and didn’t worry about distance.  In fact, I double clubbed down with my irons and was hitting an 8-iron from 130 yards.  Just playing a little cut punch shot and managed to shoot a 38 on the front of the Olympic Course at Gold Mountain, despite not really being able to move the ball more than about 220 with the driver.

The back 9 started out about the same as the front.  Parred 10 and hit a decent drive on the par 5 eleventh.  When I found my drive, though, it ended up right behind a strange mound.  Instead of playing it safe and just hitting a wedge or 9-iron over the mound I got aggressive and tried to hit a 6-iron to a scoring number.  I swung a bit too fast and felt a twinge in the back.  Each shot after that I felt it a bit more and then when teeing off on 14 it started to become very pronounced.

From then on anything more than a 50 yard pitch flared up the nerves.  I didn’t want to make it worse, but also was was quite enjoying the round and scenery and found myself really missing being out on the course so wanted to do my best to limp in for the rest of the round.  I walked 15 to rest a bit, but then played the last three holes as they are incredible finishing holes, starting with the water carry par 3 16th: 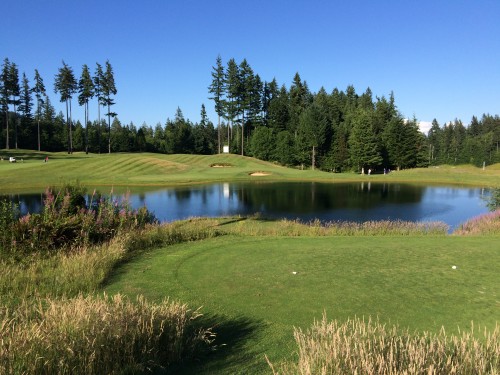 I made very easy swings and went par, bogey, par on the finishing holes and was happy to have gotten as far as I did after such a time off.  That said, it was disappointing to have the pain still there and very unfortunate that I am still not able to truly go after it.  More rest is in order, obviously, just not sure how much.  One day at a time, I suppose.

The most unfortunate aspect of this injury is that it happened at the beginning of one of the best summers to date, weather wise.  Not sure why I couldn’t manage to get injured in the rainy winter…

Back to watching the Open for now.  As much fun as it was to be there in person, for this one the views are much better sitting in front of a decent TV.