I won.  Something.  Smallish.  But, I won.  Well, technically, I think my playing partner “won,” but still, I took home a prize.  It was a bit smaller than what Rory McIlroy just won at the Shanghai Masters (his check was $2,000,000.  Mine was a $25 gift certificate, so five decimal places different.) but was still a victory that I participated in and helped capture.  I had a good partner in the two-person shamble, but then again you don’t bring a swordsman to a gun fight.  Although, I have recently become aware of the fact that a sword can indeed cut a bullet:

What is a “shamble?”  I’m glad you asked!  A shamble formatted tournament is where you and your partner both tee off and then you each finish out your own ball from the best tee shot.  This means that with the 7 clubs I currently have (putter, 56, 52, PW, 8-iron, 6-iron, 3-hybrid) I didn’t have a driver to contribute to the tee shots, but I did have the 3-hybrid to hit in case my partner’s ball happened to go askew, which didn’t happen often as he is a great golfer.  But, we did end up using 3 of my tee shots, so I got to contribute a bit on that end of the ball.

Where I think I added the most to our team is in putting.  As Chris (my partner) pointed out: my putting is good, chipping a bit less, short irons fall more and then long irons and the 3-hybrid are pretty bad.  This makes complete sense as the clubs and distances I’ve practiced most are my current strengths.  It’s almost comical in how my performance completely mirrors time practiced and it’s a huge boon of hope and understanding of where I have to go next.  Practice = better.  But I sank a couple longer putts that lead to birdies on holes where we ended up using my score.  For the record, here’s our scorecard: 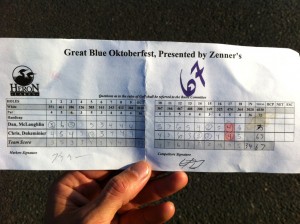 As you can see, I got a birdie on holes 1 and 3 that went toward our combined score.  Chris did the rest of the damage with 3 birdies on holes I didn’t manage as well.  He shot a 69 from the best tee shots and I a 75, the team came in at 67 which was good enough to place 3rd out of 72 teams for the gross score.  And with that came our winnings:

I’m going to frame that.  It’s the first thing I’ve ever won as a golfer, proof that I’m moving in the right direction!

It was a foggy morning out there when we started and actually through the first 12 holes.  Here’s a shot of Chris teeing it up on the first hole.  For most of the morning you had to just hit the ball as straight as possible into the fog and then hope you could find it somewhere down there…

I had some massive issues out of the tee box.  That’s by far my weakest link right now and so it was a blessing to be able to rely on a partner’s tee shots.  I lost five balls on the first six holes because of a nasty hook that I couldn’t seem to shake until the day grew late.  Once a bit of stability came along I managed to play with the same (and last one I brought) ball for the final 12 holes.  But, my long iron game was definitely nothing to write home about (even though it’s my mother’s birthday this Tuesday, I am NOT going to write to her about my 6-iron, promise.).  I didn’t, however, shank the ball.  Rather, I was hitting a bit fat or thin on most shots which gets you in the right direction, but instead of setting you up for a birdie putt it forces a tough up and down from some wet fringe or bunker.

What I am proud of about the round is that I only had one double bogey.  It came on the second hole we played, which was the 18th hole on the Great Blue golf course (shotgun tournament, we started on hole 17).  I hit my approach shot in the water and then had to drop and hit my fourth over water, hitting the green and then 2-putting for double.  After that I had a few bogeys and a couple birdies, but no blow-up holes or major mistakes.  I got up and down a few times from tough spots and never missed a lag putt by more than 3 feet, managing to always 2-putt or better.

It was quite the experience and I cannot wait for the next one.  There will be a handful of different “first tournaments” as there are different types.  Next up:  First tournament where I have a driver and every single stroke counts.  I imagine this will happen as soon as the golf season picks back up in the Spring.  From now till then, I need to work on my longer irons, tee shots and get that driver in my bag.

To celebrate this victory, I went out and played 9 holes

I wanted to play 18 more, but there was just not enough sun…

3 Responses to "Performance Check In"