I rarely do product reviews as they don’t exactly fit into what this site is about, but sometimes I find a bit of kit that I think can be helpful for anyone trying to improve their game and figure it best to help spread the word.

I recently picked up a new stat gathering tool called Arccos.  At first look it seemed fairly similar to Game Golf, which I used for a while last year, but when I delved further into its functionality as well as ease of use I became more and more impressed with the new gadget.

Last year, my hopes were high when I first got my hands on a Game Golf unit.  I thought it could be the answer to my on-course stat collection needs as prior to having one I had just been writing down everything while playing.  I would have 30-40 scorecards sitting around with a bunch of random numbers (FW hit, GIR, Putts per GIR, Tee misses Left or Right, GIR per FW hit, etc etc) and I didn’t have a good system to compile all the data outside of a homemade excel sheet that slowly started looking like the stocks page of a 1980s newspaper.  It was a lot of grey on white and wasn’t helping me see trends, let alone figure out where to focus the majority of my practice.

After that phase I moved on to GolfShot GPS which is an app that helps compile data during the round.  I liked the app and still use it here and there, but I found it to have a very limited set of data that you could input during the round.  For example, whenever you missed a GIR it compiled a “scrambling” stat but it doesn’t take in account whether you are punching out and then having to hit the green from 180 yards or are on the fringe making a 15 foot chip.  Also, any time you were in a bunker it compiled a “sand-save” percentage, no matter if it was a green side bunker or a fairway trap.  Fairways were either hit, left, right, short or long.  Didn’t matter if you striped a drive down the middle 280 yards or played a 4-iron to 190.  There is no differentiation per club selection off the tee so your “driving” stats could all be from hitting irons safely.  I want to know how my driver, or 3-wood, or hybrid, or iron, does, not just the overall average off the tee.  Long story short, it didn’t quite do it for me, but is a decent generalized view of your game and it has a built in GPS that provides distances to the middle of the green, which is a nice bonus for those without rangefinders.

Then there was Game Golf: 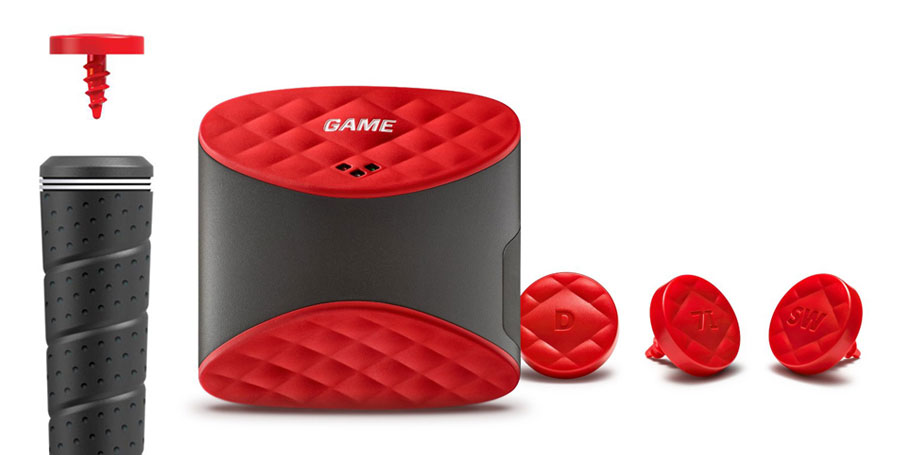 I was VERY excited about when it first came out.  I got a unit and charged it up and slapped it on my belt.  As you can see from the pic above, there are screw-on widgets that you place on all 14 clubs and then a larger widget that you clip to your belt.  How it works is. before every shot you tap whichever club you are about to use to the belt widget and it records the info.  Then you take the belt unit home and plug it into you computer and download the round as well as charge it up for the next round.

What I found was that no matter how prudent I tried to be about tapping every shot I would get lost in the moment of a round and forget a string of shots and then have to go back and manually edit the round.  I also would charge it up and then not use the unit for a day or two and by the time I got it out it would die about half way through the round.  You really had to charge it the morning of the round.

That said, it was revolutionary in concept, at least as far as things I had seen or used.  I appreciated using it and found the numbers fairly accurate (all GPS based tools tend to have about a 5 yard discrepancy).  They also continued to improve on their stats gathering software and were starting to have some solid numbers.  But, another slight issue is that you have to log onto their site in order to see your stats and rounds.  And, I just didn’t like having to wear something on my belt.  I like to keep it minimal when on the course and don’t even keep a wallet in my pocket so having something that feels like a cell phone clipped to my belt was a minor distraction.

All in all I think Game Golf is a good way to build a picture of your rounds and for someone very adept at remembering to charge before a round and tap before every shot and download after the round it’s a great tool.  For me it just kind of added a few more things to remember at the end of a long day.

Then there was Arccos.  My buddy Sean first showed me an Arccos unit and when I saw it I thought it was pretty much the same thing as Game Golf; a widget that you screw into the top of your club: 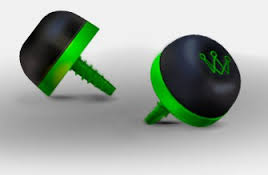 But Sean was pretty excited about it.  He was the one who introduced me to Game Golf a year ago and assured me that Arccos was worth looking into.

I needed a new system to more accurately illustrate my actual on-course play so decided to try out this new too.  The first thing I noticed was there wasn’t the need to “tap” or wear a separate unit, or charge or download anything.  It runs off of an iPhone app and each widget automatically sends the swing data via bluetooth to your phone.  I have no clue how they stay charged or if there is a battery life in the individual units, but after a couple of weeks of use they seem to be going strong.  As the weeks go by I will update this post if there are any issues with wear and tear.

On an aside, when I flew cross country with Game Golf screwed into my clubs somehow two of them fell out and got lost.  The one on my putter broke, too.  If this is the case when traveling with Arccos I will  let you know.  That said, Game Golf comes with 16 screw tops whereas the Arccos package contains just the necessary 14.  When I lost some Game Golf ones the customer service promptly sent out new ones to fill the voids.  I have not had to contact Arccos about replacement units yet, but am hopeful that they will provide these if needed.

As you play the units transmit data to your phone and after each hole you get a picture like this: 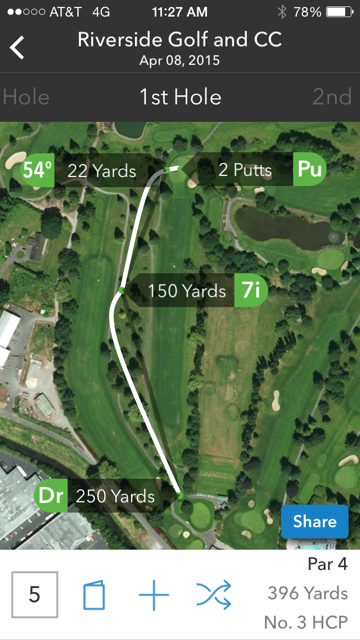 It keeps it pretty real and is similar to what Game Golf does, but with Arccos you immediately have it on your phone and if for some reason it picks up too many putts or not enough (it doesn’t get one-two footers well so if you are hitting them close and tapping them in you have to manually click “add gimme putt” on the app) you can adjust immediately.  At the end of each round you can look over the stats section and it breaks down the stats into categories similar to how ShotbyShot does, giving you a specific handicap for all the different parts of your game: 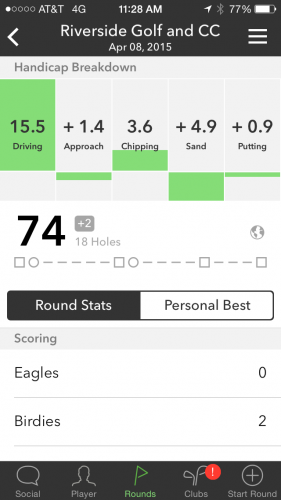 As you can see by this round, even though I shot a 74, my driving handicap was a 15.5.  This is exactly the type of information that I need to know.  As you build up more rounds you can view them all and see where your game is, as well as see how things are trending along the way.  It also collect these type of data: 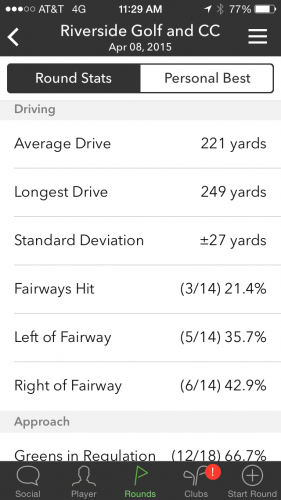 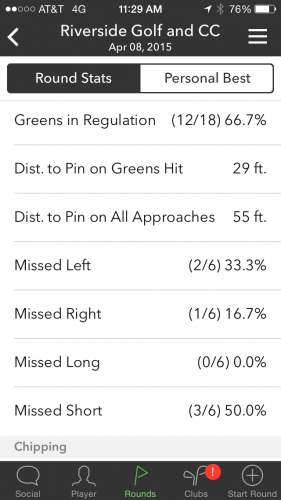 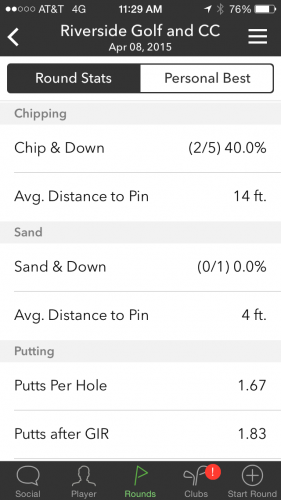 This is exactly the type of on-course information that I have been looking for while also having an incredible ease of use.

My only problem thus far is that it can be a battery killer.  They say an 18 hole round typically takes off 50-60 percent of your iPhone’s battery, but I have a 16-month old iPhone 5S and it seems to take about 75 percent of a battery per round.  About half of my rounds have been cut short at the 15th to 17th hole due to the phone dying.

That said, I emailed them and customer service got back to me ASAP with some battery saving tips.  They had a few suggestions and I found them helpful.  I emailed again with another question and within 45 minutes got an answer, so that’s a good sign for customer service so far.

Another difference between these two is that since Arccos is a phone app with GPS it provides accurate distances to the front, back and middle of the green as you go.  So if you don’t have a range finder you can use the app to get a general distance.  Game golf does not have any screen on it so does not provide anything during the round.

I plan on updating my “stats” page with data from Arccos after I get in another ten rounds or so.  For me it really helps paint the picture of my game that I had imagined was there, namely that the long game is in need of some big help.

I think that either unit is a good addition to a golfers arsenal and no matter which one you go with, or even if you just record your own stats, you will find ways to improve your game.  If anyone has had experience with these two tools let me know, I’m always curious to hear what others think about this kind of thing.

If after reading this you are interested in purchasing one, click here and get it on Amazon  at a good price and through my affiliate link.  A small percentage will go to The Dan Plan with each sale of either product.