While putting together a presentation that I am giving at Blair Academy next week I found an image from the day that I came up with the original idea of The Dan Plan.  This photograph is from Omaha, Nebraska on June 27, 2009.   I remember the date because it was my 30th birthday and one of the first times that I ever walked on a golf course.  My brother and I were playing a short par 3 nine hole course and I think I shot about a 50 for the nine holes that day, or almost double par.

Look at that form, grip, dress, etc.  It’s pretty hilarious.  Flash forward a few years and this image was taken just the other day at Columbia Edgewater during a round with a media outlet: 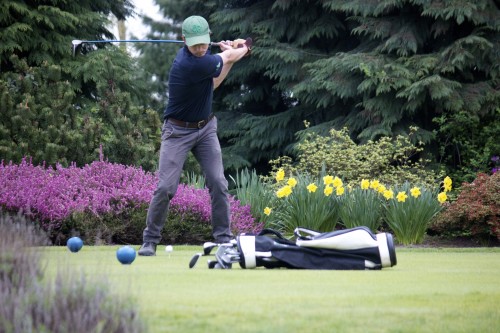 Definitely looking more the part these days.  I suppose those images help visually demonstrate the difference between nature and nurture.  The first one is au naturale and the latter is after a few thousand hours of practice.

Speaking of that, CNN called this morning asking me to do an interview fielding questions about Tianlang Guan (the 14-year-old who is playing in this week’s Masters tournament) and whether I though he was a born natural or had put in his share of hard work.  Very interesting debate and one that I do not know the answer to, although I must admit that I have deep opinions on the subject.  It is incredible what he has done thus far and I am pulling for him all the way.  I think that he has earned his spot through countless hours of hard work from a very young age.  Saying that he is a born natural takes away from all of the sweat he has put into the game.  Regardless of which side of the nature/nurture debate you are on, seeing him is inspiring.  It is inspiring to know that through about ten years of work he has made it into the Masters.  To me that shows that this is possible for anyone who is willing and able to put in the hours.

That’s it for now, was just looking back at some old images and thought the contrast was pretty interesting.  There is much more to talk about, but I have work to do for the presentation and have a 6 a.m. wake up call for a tournament tomorrow at Langdon Farms.  It’s not exactly Augusta, but I am still very excited to get out there and play some rainy tourney golf.

25 Responses to "Quick image and a thought about talent"