I had a dream last night that I was walking across a bridge and realized that I was at 9,500 hours and had not yet shot par.  It was an anxiety based dream and the only one of it’s kind to date.  I have no clue what caused it and I woke up in a bit of a energy funk.  The day just felt a bit off for some unknown reason and even though I wanted to practice I just had a feeling that it was going to be a rough day on the links.  Every day is different and you never know what’s going to happen until you get yourself out the door and put your body in motion.

I hit the range first and there was a TaylorMade demo going on with their new RocketBladez (not sure if that is spelled correctly, but it looks off enough to actually be the right name).  I warmed up and then hit a few of these demo clubs and was a little surprised by their distance, but not too shocked seeing as everything is getting longer and longer these days.  My “gamer” 7-iron goes about 150 this time of year with range balls when I really connect with it well.  The TM 7-iron, which comes stock with a shaft that is about 3/4 inch longer than standard and I would be willing to bet is bent more like a 6-iron, went about 170.  My 4-hybrid flies about 185 in December, the 4-iron Rocketblade was carrying 205.  That’s into wind on a 42 degree winter day with range balls.  It’s just crazy long.  I get 200 out of my 4-hybrid in the summer so I assume that means these new clubs would be somewhere in the 220-230 range.  That’s long.  I was wondering why that is.  How are they engineering so much distance..

So, I looked up the specs:

The 4-iron has 20 degrees of loft and a length of almost 39″.  Compare that with some old school and “modern day” clubs: 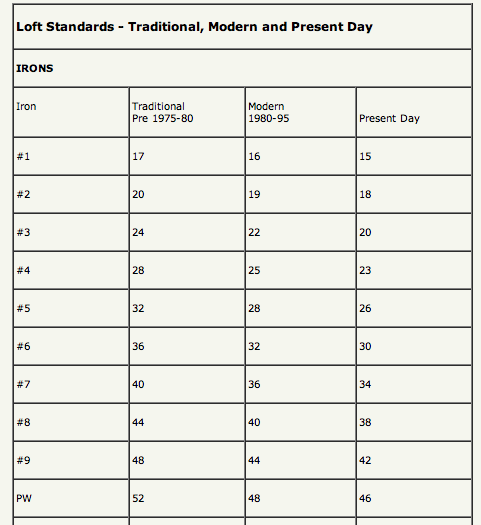 Back in the 1970s your typical 2-iron had 20 degrees of loft and the standard length back then was about 39″ for that club.  So, basically they are engineering 4-irons to play like an old 2-iron used to.  The big difference is that with game improvement clubs the 4 is a heck of a lot easier to hit than the 2 was.  This isn’t a good or bad thing, just something that I realized today.  Clubs aren’t quite what they used to be and just because player A hits his 7-iron 180 yards and player B hits his 150 doesn’t necessarily mean that there is a difference in swing speed or technique.  Also, at the end of the day it’s consistency that wins in golf, not just distance.  That all said, which clubs would you go with?

The question I have, though, is where does it end?  If Dustin Johnson can hit a Rocketblade 4-iron 260 yards as the demo guys said he could, will par 5s exist in the future?  Will they have to redesign golf courses to have 750 yard par 5s?  That would be awesome to play.  350 yard drive, 300 yard 3-wood and pitching wedge in…  Golf in the future.  The courses will play 9,000 yards long.

It is interesting how gear changes over time, but that is a competition problem for manufacturers.  If you are going to get new clubs, though, just remember that if you are getting more distance from one club it is probably because of the loft and length and not because you magically swing one faster than the other (unless there is a huge weight difference, but that’s just another aspect of manufacturing).

Back to the day..  After working on the new moves in my iron swing that Adrian has me doing and spending some time chipping, I went off and decided to play 9 holes with a regular playing partner at Columbia Edgewater.  Nothing was really feeling all that great and I figured I would just see what my new iron swing was producing on the course with some actual targets.  To my surprise, I actually played one of the best 9s to date and was a foot away from sinking a par putt on the 9th hole for my first ever 33 on a side (it’s par 35 on the back of CECC which we played first, so shooting a 33 is 2 under).

I decided to make it a full 18 because everything was working so well, but my playing partner had to drop off of at the turn so I ended up playing the front 9 on my own.  The entire round went like this, remember that I played the back first: 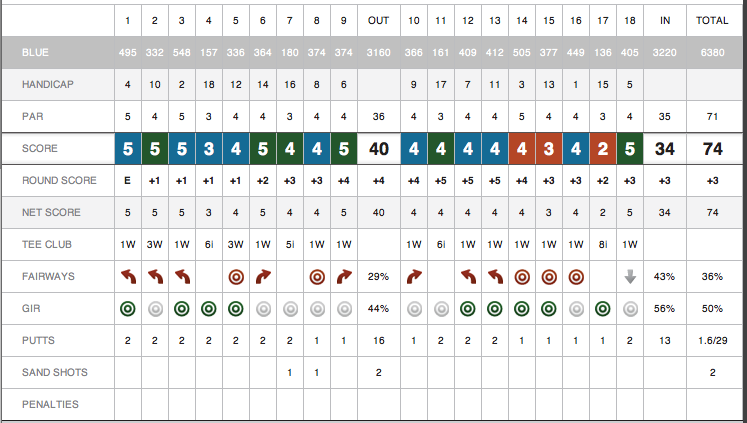 The stats are pretty funny.  I drove the ball horribly, but managed to get on the green often and scramble pretty well.  On 16 my drive was a 190 yards slice that left me 260 yards to the green.  On 5 I hit the fairway but it was with a 3-wood, so I really only hit 3 fairways with a driver.  The rest were blocks or hooks.

Putting was great.  I took out a different SeeMore putter than the one I had been using for the past week and without hitting a single warmup putt I had just 13 putts on the first 9 and 29 putts total.  Those putters have completely changed how I line up and roll the ball.

All in all, it was the best round I have shot to date and the deepest I have gone even par to date.  I was even after 14 holes and then bogeyed three of the last four.  To be fair, I started to think about score and putted “cautious” on a few holes towards the end that completely ruined my chance for a couple more birdies and one par save.  And, as the day went on I started to lose the feel for what I was working on with my irons so on the last 5 or 6 holes I was starting to push the ball again whereas I was dead on the money earlier in the round.  My new swing has me doing completely different moves through impact and it’s not 100 percent ingrained yet and when the pressure to score was on I found myself reverting to past habits.  It’s just been about a week since I started working on the new move, though; it will solidify with time.

Driving is still killing me.  I talked with Adrian after the round and we are going to meet and discuss the driver this week.  After a year of swinging it, I just don’t have an internal model of how it should “feel” at impact.  With every other club I know what a good shot and bad shot feels like.  I can close my eyes and tell you where my iron shots go just based on feel, but with the driver I haven’t developed that proprioception quite yet.  I can tell from working with him, though, that I will find my internal model soon.

It’s all about developing a feel for the game.

I never would have guessed that I was going to have a shot at shooting par today from how I felt this morning.  Perhaps the dream was an omen that good things are just over the next bridge.  It is important to keep on working, no matter how you feel that day because you never know when opportunity may appear.  Last week was the first time I have played the first 12 holes at even par.  Today was 14 holes.  Next time I’ll push it to 16 even.  Then 18.  Once you do something once you know you are capable of doing it again, and the next time you can push the limits a bit more.  This is progress and this is why I train every day.

Kind of cheesy, but I started dating the balls that I play when I brake my personal record: 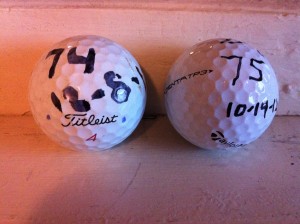 The one I played today was a Pro V1X that I found in a water hazard last week.  It played like a champ today.

16 Responses to "Too quick in judging a day"