The reason that I came on this trip is that a Norwegian TV show wanted to do a story on me so flew me over there instead of flying a producer and camera crew to the states.  But, because of the time of year we decided to meet in Gothenburg instead of Oslo as the courses in Oslo are closed for the season already and the weather in late October can be a bit suspect at latitude 60 North.  So, Gothenburg it was.  And, while going trans-Atlantic it just made sense to route the stops through Zurich so I could see my brother and family.  It worked out well, as it usually does when things are planned out.  The visit was perfect and the shoot went smoothly.

The shoot was quick, too.  I basically just taught the TV host how to hit a golf ball as he had zero experience in the sport (a la Dan 2010) and then told a quick summary of my story to date while we played a couple holes of the St Jörgen Golf Club.  I love when these things go well as my journalism background likes to get things correct the first time and be efficient.

Afterwords I had 48 hours to explore and reflect on the trip as well as the past few weeks.

Walking around Gothenburg I was reminded how important it is to have an extremely strong sense of self belief in your vision.  I’m not exactly sure why that thought came to mind while exploring the 17th century neighborhood of Haga Nygata, but I suppose when exposed to the countless options of this world it can be easy to have a wandering mind. It’s important to have a bit of that old fashioned tunnel vision to keep the train moving along.

For me it is also important to step back and appreciate everything that my work has accomplished both on and off the course to date.  Never would I have imagined that I would get flown to both Australia and Europe in a single year to make an appearance.  It’s important for me to relish these experiences as there are a lot of things that have been foregone over the past 4 years in order to get to where I currently am.  Short term (or even longer term) sacrifices lead to the long term payout.  This is true with just about everything in life, not just one man’s chosen path or his golf game.

So relish I did and I had a great time during the trip.  In a way it felt like an end-of-the-summer vacation and seeing as I only golfed a few times and didn’t get much practice in it might as well have been my annual time off.  When I returned I felt refreshed and ready to get back at it, too.  It took about an hour to warm up the body as 15 hours on a plane does no wonders for your golf game, but once I get the swing back on line I hit some good shots, including birdying my first hole back in the states, which is a great sign of things to come.  Of the 9 holes I played I birdied 3 of them and felt good rolling the ball.

Now that I am back and refreshed I am ready to make the next push of the Plan.  The first step is to meet with Michael Neff again and get my clubs better fit for my current swing.  He texted me while away and said he had it figured out and would tell me in person when we were on a range.  We shall meet early this week and I am excited to hear what he has “discovered.”  I have no clue, but trust that he knows what he is doing and will set the sticks accordingly.

The next step is to decide which clubs to play with that new configuration.  I have been hitting my Titleist set for 20 months and still like them, but have a call with Titleist and two other club manufacturers in the near future (i.e. this week).  I have been offered similar deals to what a typical club pro might get (14 clubs, hats, gloves and balls) from three manufactures right now and need to decide whether it makes any sense to try out something new or to stick with what I have.  It’s a good problem to have.

On a side note, here is a story from a Swiss newspaper about my time over there: 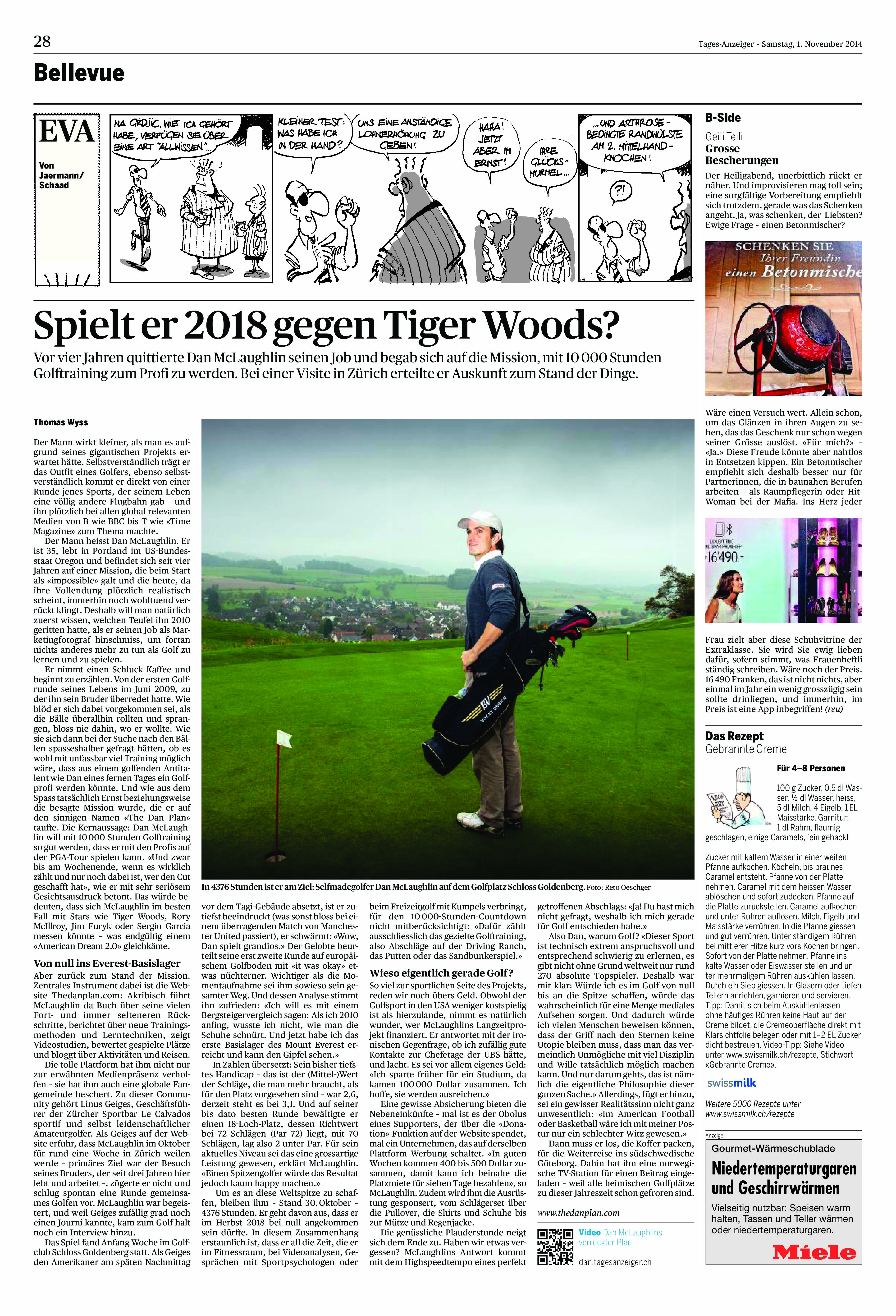 As you can see, I’m decked out in my Titleist, Vokey and FJ gear.  Like the world’s cheapest billboard.  I truly appreciate the gear that I have gotten to date and think I have repaid everyone who has sent it in media and social media outreach.  Seems to be a fair trade in my opinion.

Perhaps it’s time to start adjusting the tone and approach of the blog in order to expand the reach and truly inspire instead of just telling my own story.  The original idea of telling my story seems to be getting stale and I think the more useful information would be to tell the story of what research and findings people across the globe are currently discovering that can help us all improve.  I have met a number of these people and think that focussing more on their work, albeit through my training eyes, is a better approach for both myself and every potential blog reader out there.  It is time to seriously step back and scrutinize the path this blog has travelled down and figure out where it needs to go for my own sanity and the readers’ sake.  I’m not saying that my training or practice will be different, just that I will focus more of this site on human performance in general while entangling it with one person’s expeditions.

At any rate, this wasn’t supposed to be a blog about shifting directions; rather my aim was to talk about the Europe trip and about what comes next, although I suppose the jet lagged mind wanders when wide awake at 4am and what I worry about during those middle-night times is often how to continue funding this expedition.  Mountaineers and explorers have similar issues, although once they finally raise funds and set off their concerns shift from funding to survival.  I suppose I have a leg up in that respect as it is very unlikely that getting lost or an avalanche will be my demise.   Everything has it’s plusses and minuses.

Perhaps that is the point.  You can travel the world and see all of the amazing people doing their amazing work stuffs and fantasize about what their lives may be like but at the end of the day you have to trust your heart compass is pointing you in the right direction.  Without that faith all is quickly lost.

There are countless ways to get from here to there, just pick one and stick to it.  That, in a nutshell, is talent.

And now I shall force upon you a photo slideshow of my 11 days in Europe.  You knew it was coming and like the good relatives you are you will do me a kind and take a look.  Perhaps pretend you just found this in a thrift store laptop 100 years from now and are trying to create a novel around it about the lives of those involved.  Or feel free to skip it.

In a couple more hours the sun will come up, at which point practice is in the equation.  For now I will continue the mental process of organizing my goals for the rest of 2014 and then begin to think about the year to come.

6 Responses to "Sweden and Switzerland part 2"