The last post took place over the first two days of a nine day trip.  Those days were a great intro to the Pebble Beach tournament and some of the more impressive behind-the-scenes activities that go on in tandem with the actual four-day tourney.

The next morning we were invited to the Pebble Beach Golf Academy, which is essentially the main driving range for Pebble Beach with a golf teaching school attached, and were able to individually work with four of the instructors there.  This was an amazing experience as these guys have been around it all and are on the top of their respective games. It was two-fold inspiring: I had hands on work with instructors that have helped countless PGA Tour players and at the same time there were a number of big name players on the range working on their own swings in preparation for the week.  I was hitting balls on the same range as guys from Snedeker to Kenny G, who happens to be a 2 handicap.

The outside of the academy:

After a little warm up the lessons began.  My first one was all about putting and utilized the SAM putting lab, which I had been on years ago.  It looks like this and is a machine made to very precisely measure how you aim and swing the putter:

That is putting instructor Kevin syncing my SeeMore putter with the machine.  What he found was that I have extremely accurate and consistent aim as well as stroke, but my tendency is to cut across the ball from out to in which isn’t optimal as it can put a bit of side spin on the putts.  He gave me a few drills to work on to get the ball rolling more end-over-end and then it was off to the second lesson.  Since then I have been working on my putting stroke and have seen some good results.  He also suggested I look into a more face weighted putter as mine may actually accentuate my own putting flaws.  Something to keep in mind down the road.

The next lesson was outside on the range and it was a little more “old fashioned” than all of the others simply because the instructor didn’t use much technology.  But, he had great eyes for the swing and that’s worth a ton in golf.  This is the two of us chatting swing styles: 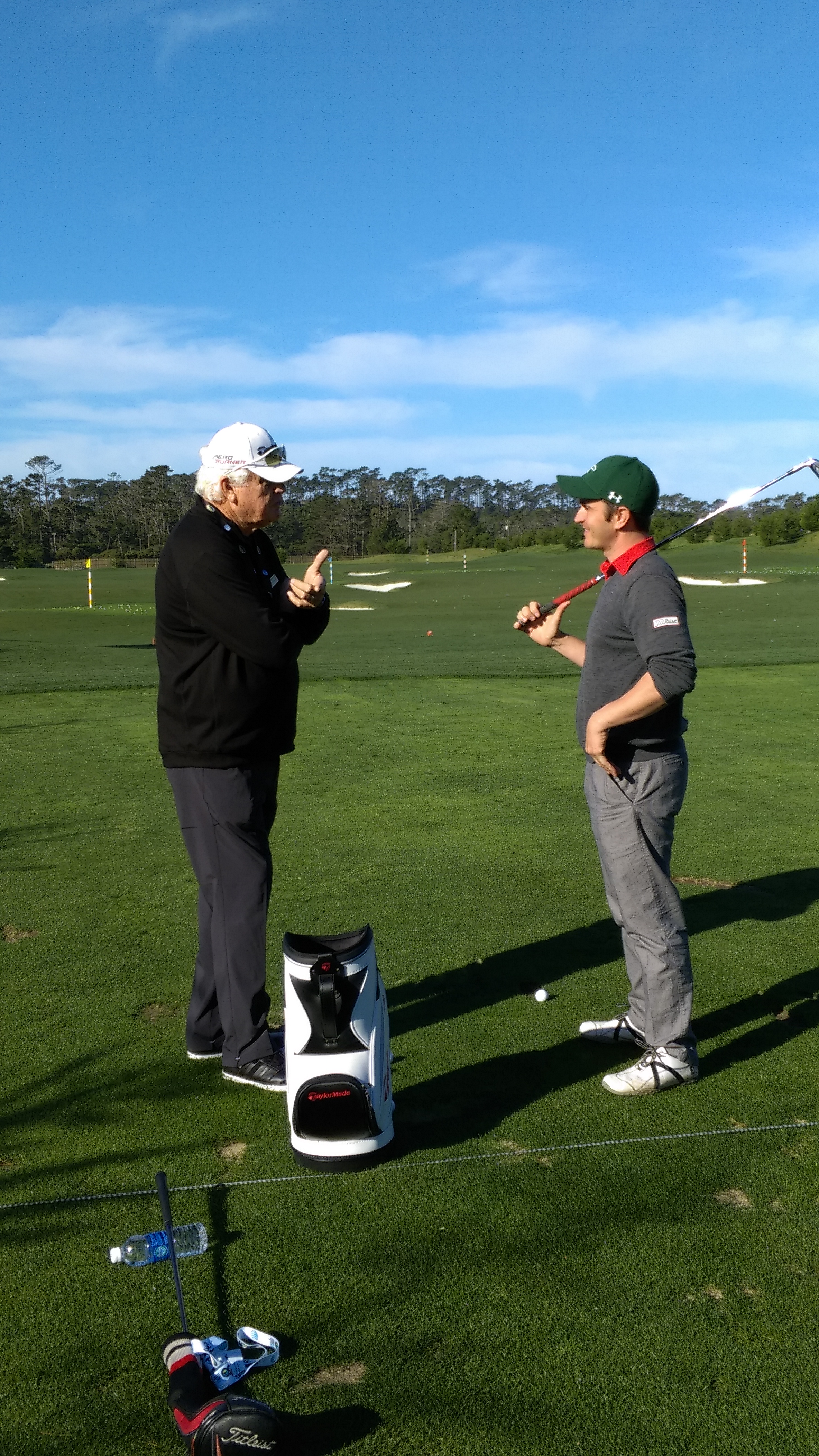 The coach’s name was Dan and we talked about some issues I was having with my ball striking and he had some good tips to share after seeing me hit the ball. The one that stands out most is that he said my lower body was overactive and I needed to focus more on hitting the ball with my shoulder turn.  Good stuff.

The next stop was with something that I had never seen in person and was pretty excited about.  It was with Scot Nei and his Robo Golf Pro robot.  It’s probably easier to show this rather than try to explain it:

It’s a robot that you can program to swing any type of swing at any speed and then you hold on to the club and it moves you through the motions that you are trying to learn.  I found it interesting as instructors have told me to “feel” certain things in the past and have even been hands on trying to place my swing in specific positions, but with this robot you can actually feel exactly where an instructor wants you to be through an entire swing.  You let it guide you for a handful of swings and then turn around and hit a couple of balls and you can immediately feel the difference.  I hear there is one up in Seattle, might have to make some trips up there in the coming months to get more reps in.

The final lesson was with Laird Small, who has been the director of the Pebble Beach Golf Academy since 1996.  Laird’s strength, outside of massive experience in the golfing world, is his ability to communicate what needs to be said.  There are a number of people who are extremely intelligent when it comes to golf biomechanics, but far fewer who can reach people in a way that makes sense.  This was the case with Laird and what he told me (we talked about my turn, chess positions, arms, etc) made sense to me and I have been able to implement some of it already.  He’s the kind of guy you want to see weekly and if he was in Portland I would most definitely do that.

That was a great start to the day.  I wish the lessons could have been all day, but with such a busy week there was a lot of work for the guys to do.  We spent a little time on the range watching some Tour players hit balls and then hit the road.

The next stop was lunch and the whole group sat down at a table with a guy eating by himself.  About 30 seconds in I realized it was David Duvall that we happened to be sharing a table with.  Here is Tiffany showing him how to take a selfie:

He was a upstanding gentleman and we all had a nice lunch chatting golf and life.

The rest of the day was filming a few interviews and random things for the story as well as a bit of down time in the late afternoon before heading to dinner.  Where we were able to eat dinner this night was at the players “tent” as part of the Pairings Party that happens after the official tournament pairings are released.  The party and dinner were good and it was fun to celebrity watch. But, the most fun came when this man randomly came over and asked if he could join our table.  Completely random, and amazing:

It was a treat like no other.  Bill Murray just happened to join our table and hung out with us for the better part of two hours.  That is him and one of our hosts for the week Jena.  Bill was incredibly kind and, of course, funny.  He talked golf, wine, life, charity work, art, etc.  I could not have been happier as he is perhaps the only celebrity alive that I really wanted to meet.

Honestly, I could have left that night and felt like it was an incredible trip.  Played an amazing course, had lessons with four incredible people, got lunch with David Duvall and then spent an eve with Bill Murray.  Life was feeling good and it was literally just the third day of the trip.    See, it’s hard not to sound like I’m bragging, but at the same time I can’t imagine not writing about this experience.  I won some sort of fantasy lottery.

The next day began with a historic tour of Pebble Beach. We had breakfast at Pebble Beach’s famous The Bench restaurant and then got in carts and toured the 18 with historian Neal Hotteling (who literally wrote The Official History of Pebble Beach):

Neal showed us around the course and described some of the more interesting ways in which things have changed over the years as well as the history of the property, which was originally purchased for $500 a couple hundred years ago.  We also got to stop by and see Bing Crosby’s house, which has an amazing putting and chipping green in the back yard and overlooks some of the better holes of the course.  It was great to get his insight into the course.

After that I was able to watch some of the celebrity shootout that happens on Wednesday and see the groups come in at 18, which might be one of the most beautiful finishing holes in golf: 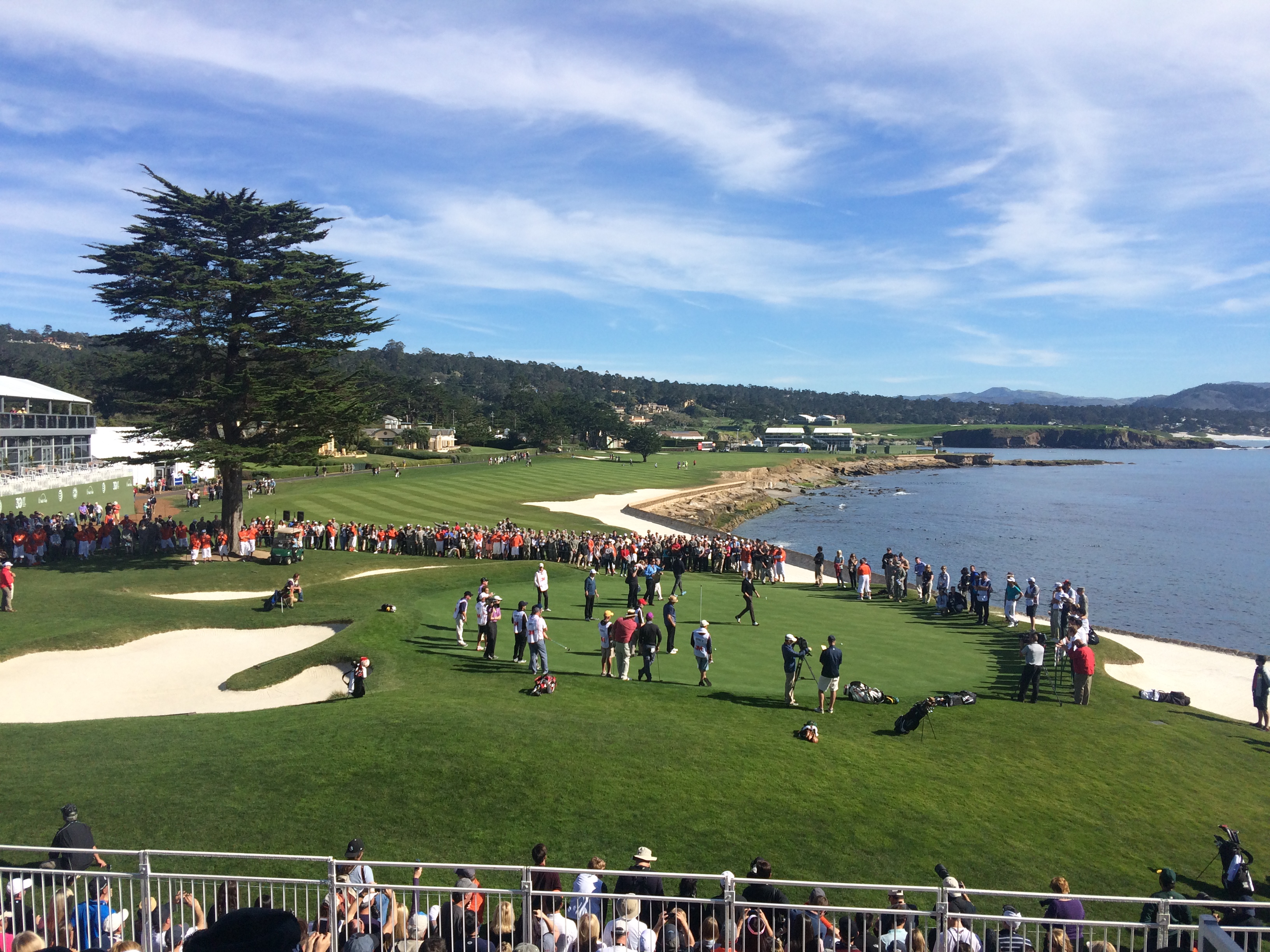 And…  Just when we thought the day was over and had been blown away by everything so far, AT&T Fans Eye View had another surprise for us.  We got to meet one of the golfers and Katie was actually able to have a short putting lesson from this guy:

Jordan Spieth was a really good dude.  Wise beyond his years and a nice guy all around.  He signed stuff for everyone and I got the flag on 18 signed for my buddy Eric, who I think loved it: 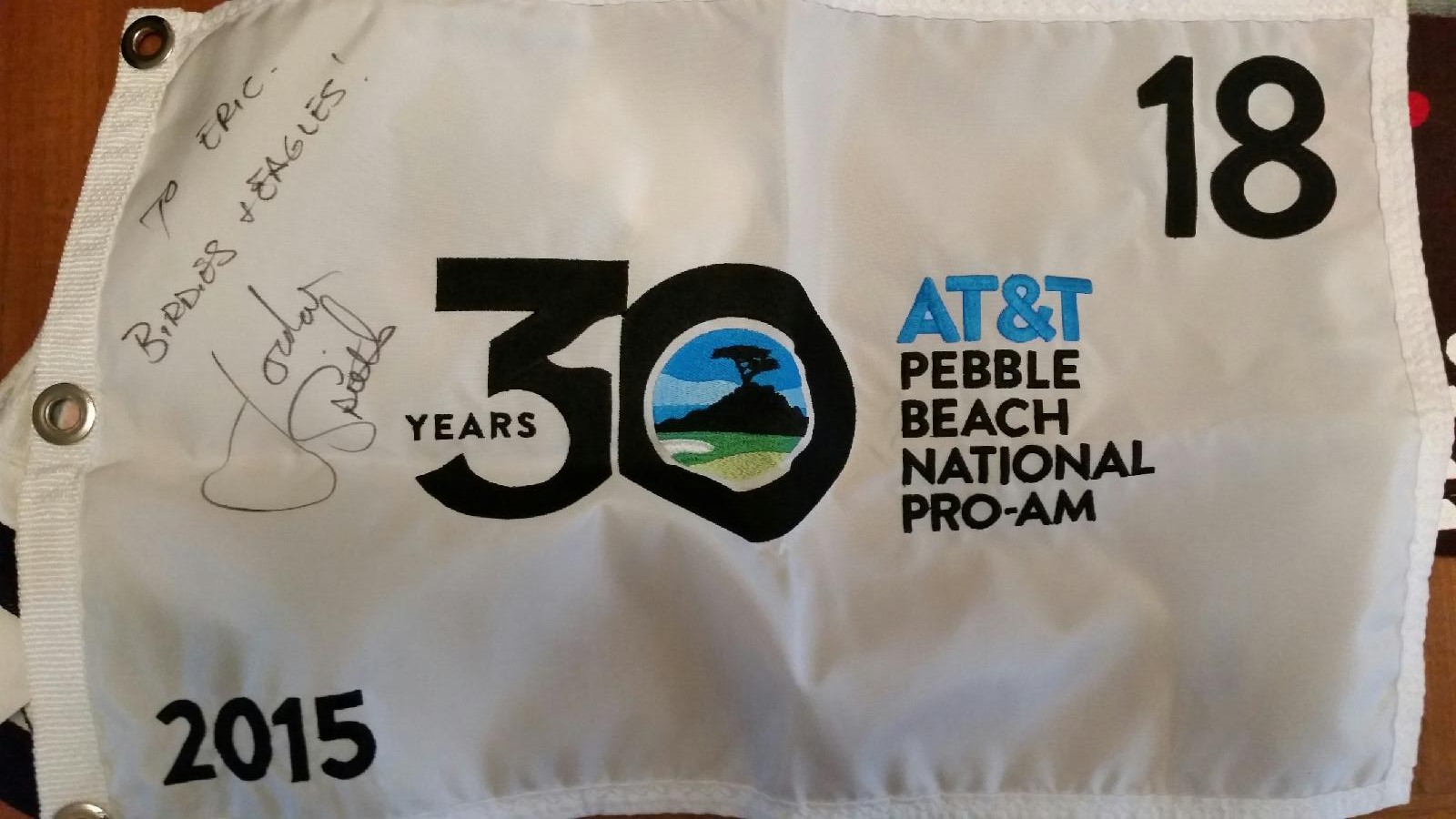 We were all pretty blown away by everything that had happened so far.  It was incredible and seemed to just keep coming.  So, by the time dinner rolled around and we were away from the course we all assumed that the day was over.  But, there was one more surprise that nobody saw coming.  As part of the kickoff event a bunch of the celebrities were putting on a show down the street.  AT&T invited us to not only watch the show but we also were able to go backstage and shake hands with a bunch of them including Larry the Cable Guy, Colt Ford, Jake Owen, Michael Bolton, Kenny G, Clint Eastwood, Ray Romano, Tommy Gainey and a more that I can’t seem to recall right now.  It was great.  After our 15 minutes backstage, the group was leaving but I kind of “lingered” and got lost and then ended up getting to spend the next couple of hours back there.  It helped that I was a photographer in my past life as there were a number of active-duty marines who got the same meet-and-greet treatment that we did who also wanted photos with the big names and I wasn’t afraid to go up to people like Clint and ask if he would take a photo with those soldiers.

After that I hung out and got to know a few of the guys: 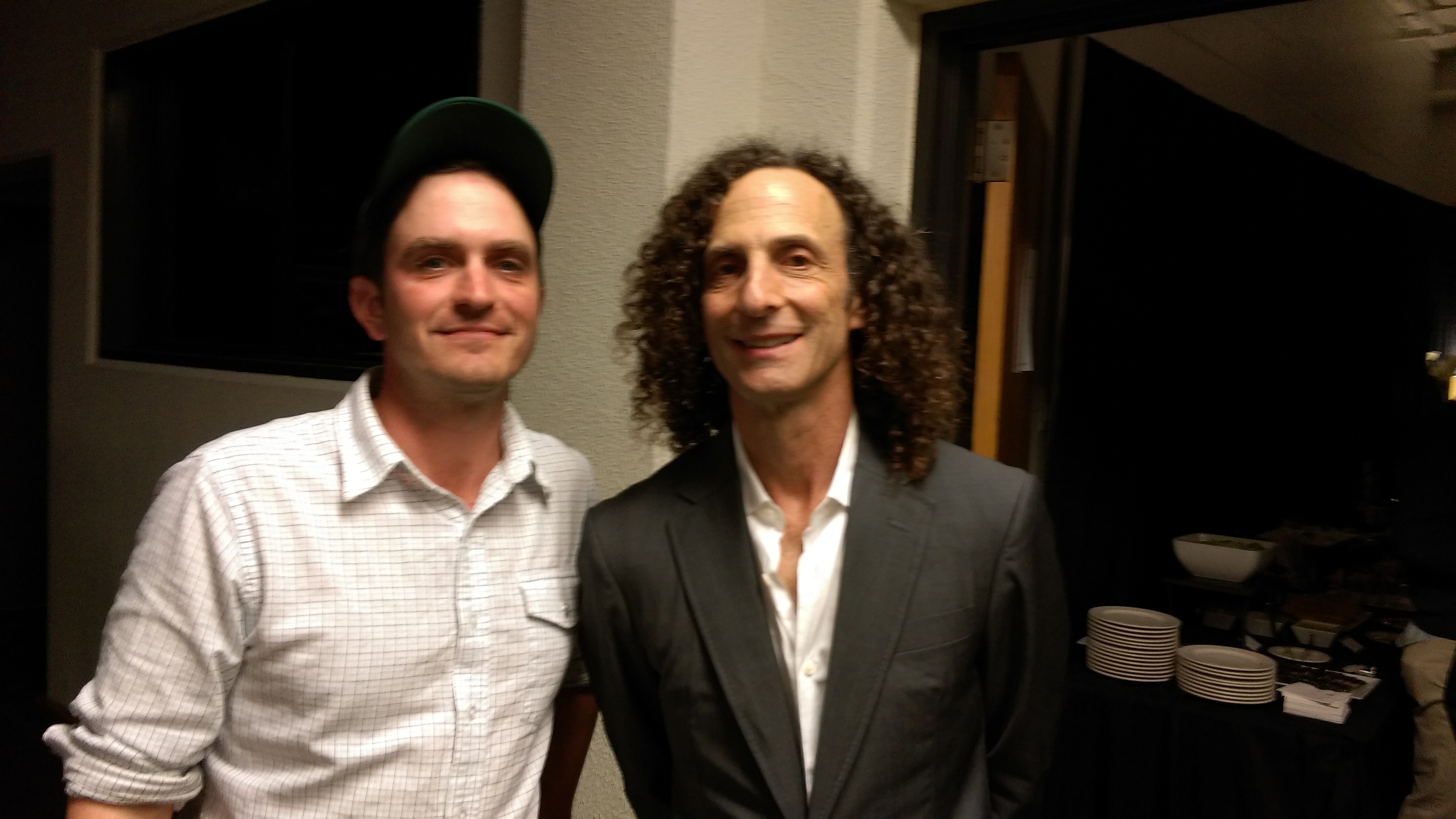 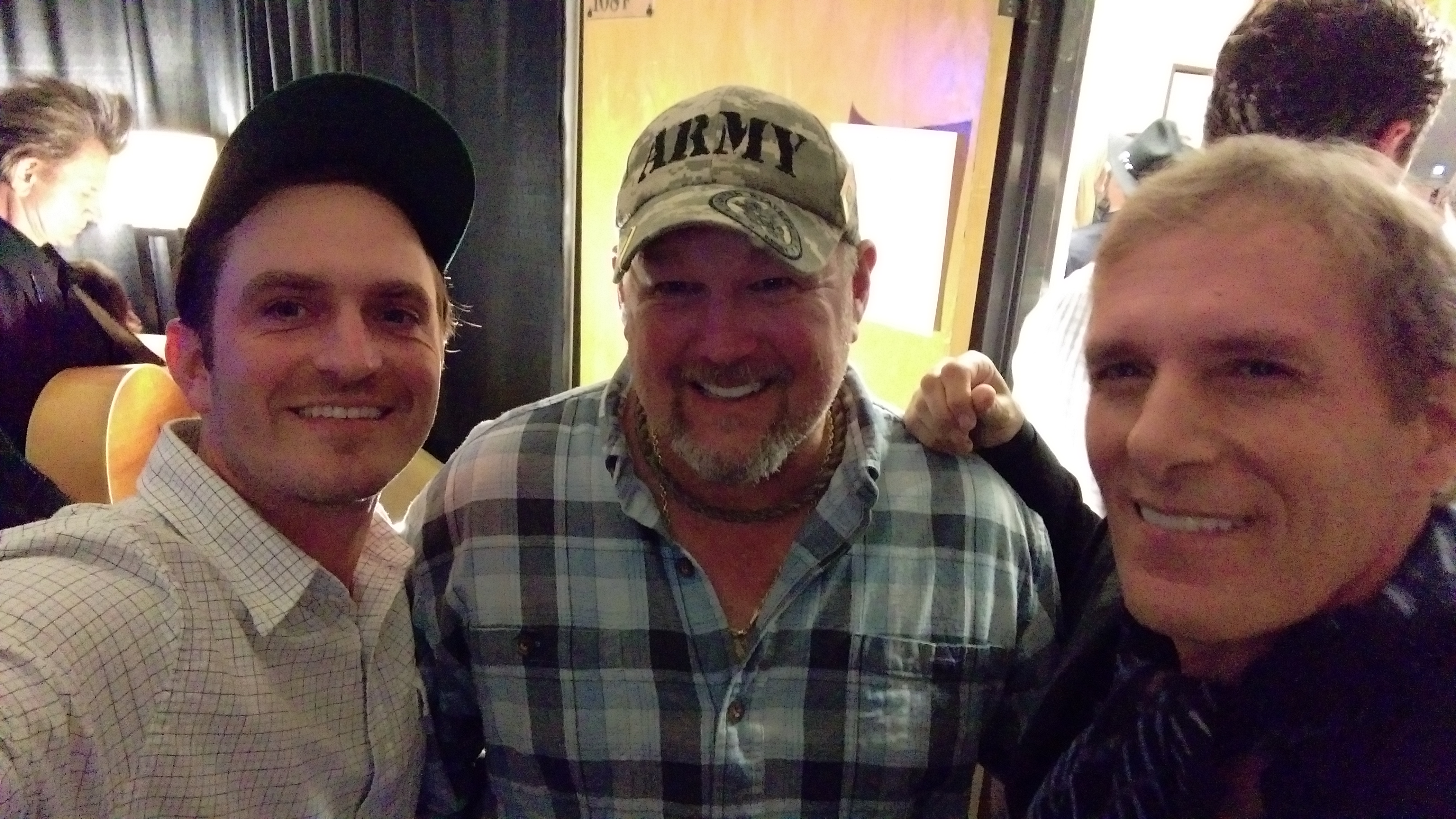 I’m not sure I even scratched the surface of what it was like.  I can’t imagine two more amazing days than these.  And, the tournament hadn’t even started yet.

On the final installment of this series I will talk about the tournament itself as well as what it was like to play Pebble beach from the same boxes as the pros and to the exact same pin placements.  That is coming in a couple short days.

8 Responses to "The most amazing week, part 2"