In this third, and final, chapter of the Pebble Beach story, we shall recount (probably closer to reminisce) the actual AT&T Pebble Beach National Pro-Am as well as what it was like to play the track the day after from the same tee boxes and to the Sunday pin placements.  it’s a trip upon an amazing trip and as fun as it is to recollect, it’s hard to look back without wishing the entire experience was just about to kick off.   But, I’m not a greedy guy and am simply happy to both have the experiences as well as be able to share them.

Thursday started with a bright and early east-coast radio interview talking about the trip to date and then I met the group downstairs to head over to the tournament.  I have only been to one PGA Tour event in my life and that was back when I had just three clubs, so I was very excited to see how they managed the course as well as approached each shot.  Today felt like a bit of research for my own future development and I had goals to see how the different pre-shot routines varied.  And, I wanted to see some good golf as well as some entertaining celebrity golf.

Even the walk down to the course from the main entrance was exciting.  Not the best picture, but as you are approaching the course you start to see the ocean and can sense the history of the place: 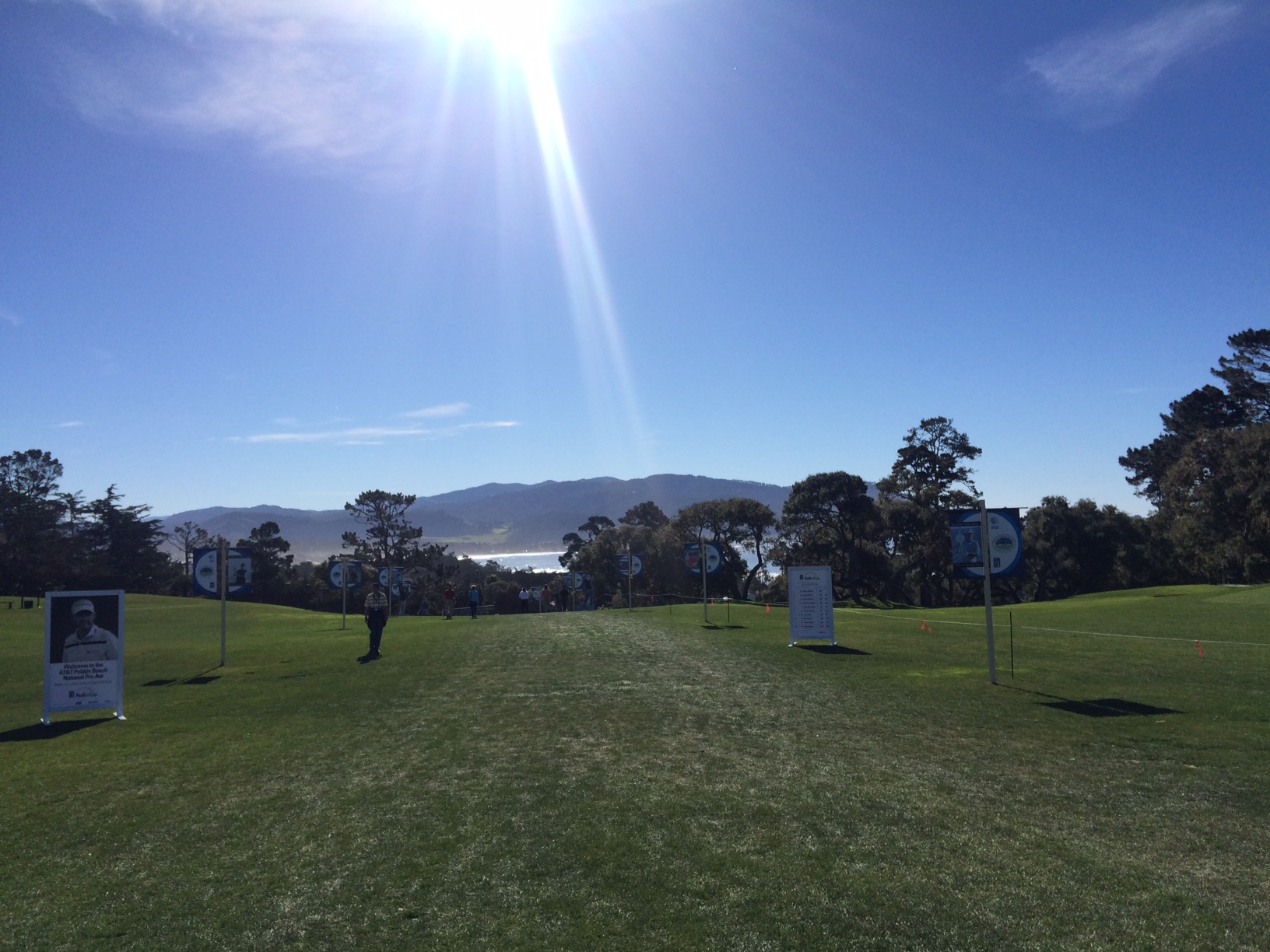 The first thing that I did was watch some groups tee off on the first hole.  The pros all took long irons or hybrids as you just want to send it out about 200-210 yards and then the Ams were using anything from hybrids to drivers.  I felt for the Ams on this first box as a lot of the ones who were not celebrities and not used to performing were visibly nervous on this first box.  I could only imagine what it must be like to tee it up on the first hole in front of a huge crowd for the first time.  Made me a little jealous as I wanted to be in their shoes, but at the same time empathize with the tension.  A couple of them straight topped or shanked the ball, even though on paper these guys were anything from a 2 to 12 handicap.  It’s one of those things that takes experience to adjust to, I sensed.

After a few of those groups I wanted to head over to the triangle where you can see the green of 6, the entire hole 7 and the tee shots for 8.  It’s an amazing little spot on a peninsula cliff that contains the shortest hole on the entire PGA Tour, the 100 yard par 3 7th:

I couldn’t wait to play this one.  I hear it’s a crazy hard hole when the wind is up that actually averages a 4.7, but without wind it was just a little half gap wedge layup that almost every pro hit.  Still exciting and fun to watch them pitch it down and have the ball spin back towards the hole.  For a fun fact, the longest club anyone has ever used for a hole in one on this hole during competition was a 3-iron.  Playing just 100 yards, that is a ton of wind to knock that thing down.

Later in the day we stopped by the media room and got to sit down at the press table where they interview golfers after their rounds.  It was fun to check out and see the behind the scenes stuff that goes on.  And, got to sit in the same seat as the future winner: 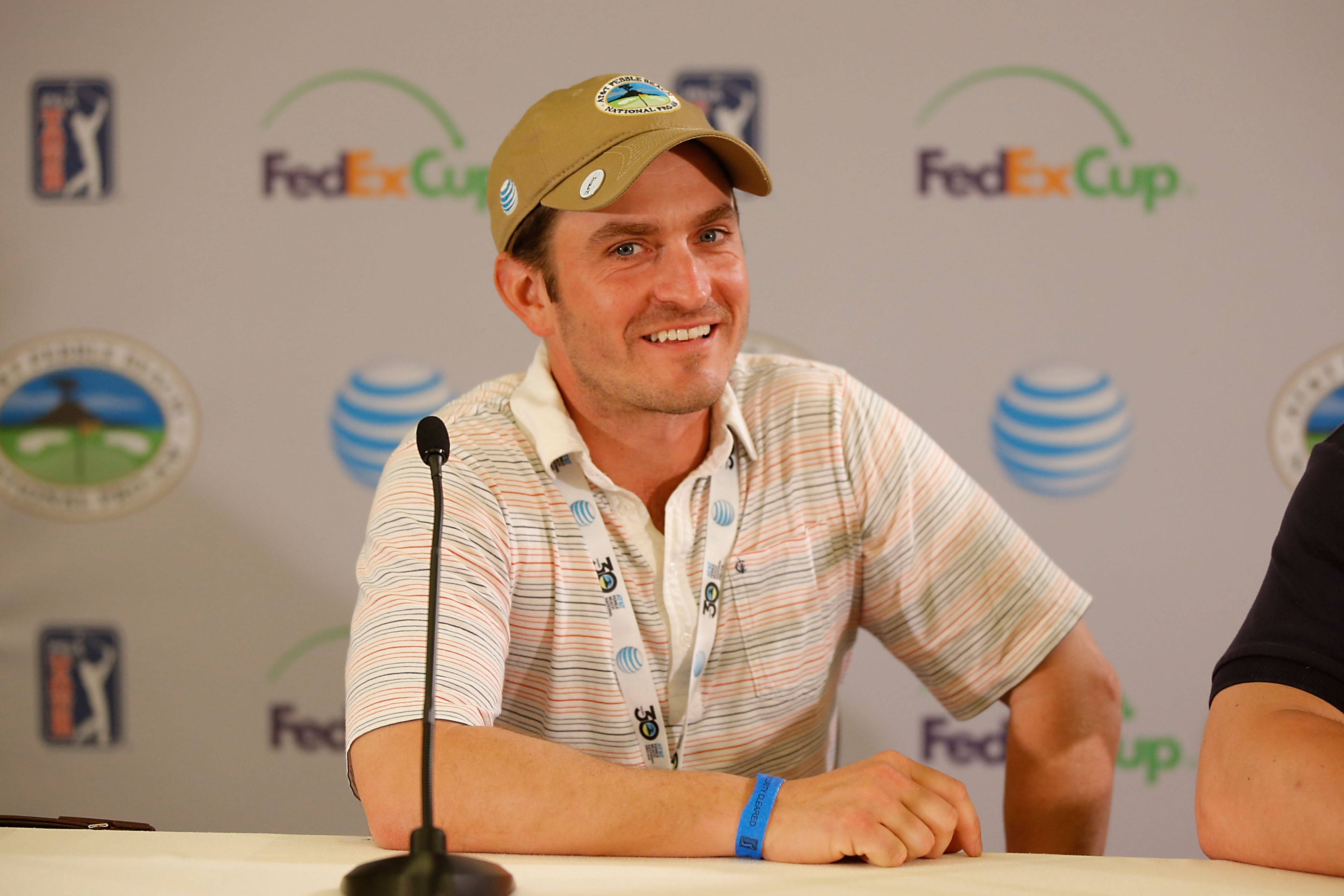 It was a good seat to be in.

After that the final groups were starting to come in and as a special treat we were going to get to chat with Herm Edwards who had just finished his round playing along side John Daly.  Herm was an amazingly kind and funny man who had some great insight in the sporting world, including his thoughts on Tiger’s state, which to sum up is that Tiger needs to go out and focus on finishing four tournament rounds instead of putting the pressure of winning right out of the gate.  First finish a tournament and get back into playing four rounds, follow that up with getting back into the winning circle down the road.  Herm and I chatting with Tiffany giving fist bumps to John Daly: 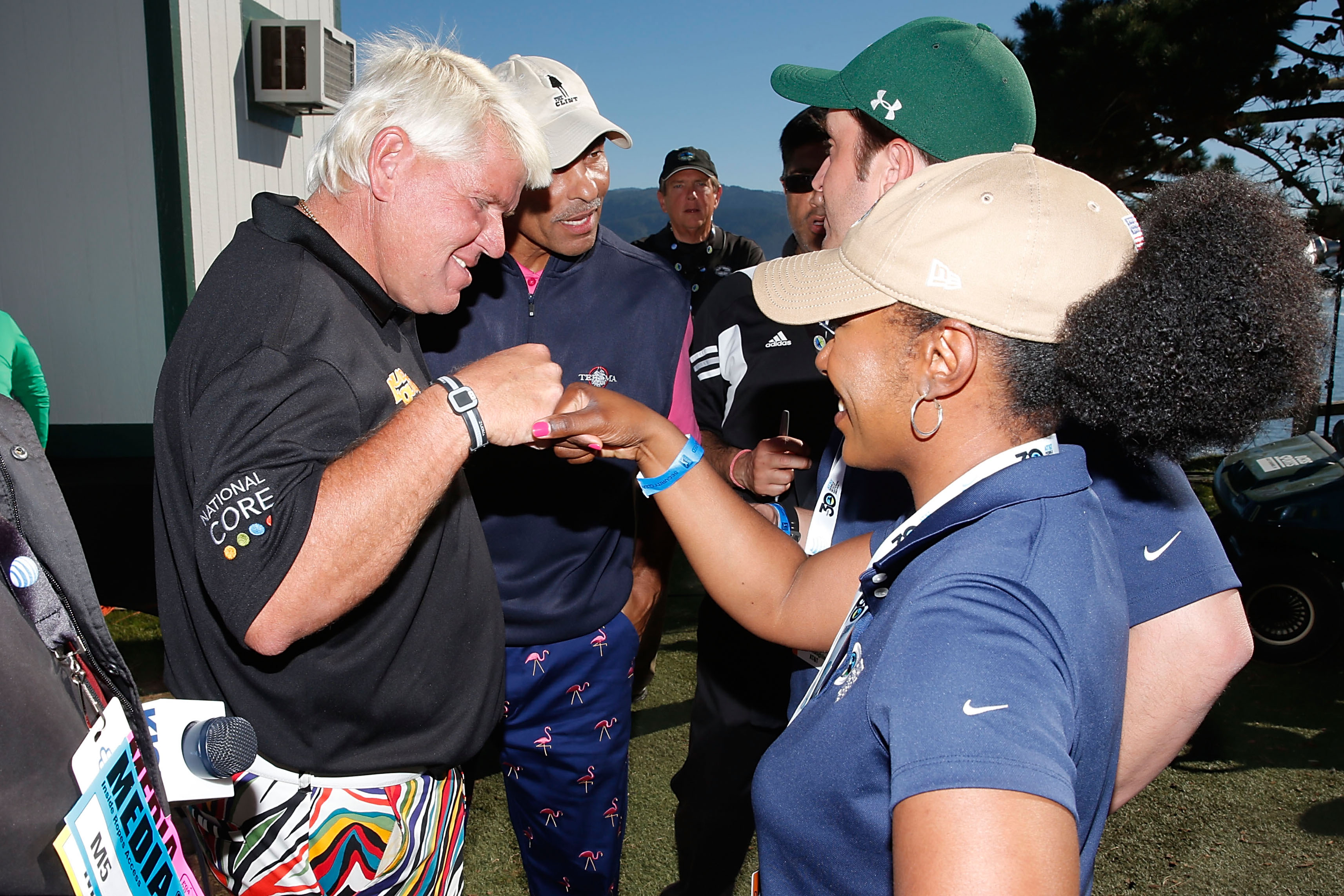 It was an incredible first day.  One for the ages.  And, there were still three more rounds to watch and enjoy.

To keep it a bit on the briefer side, the second day’s action was watched from Monterey Peninsula Country Club in the AM and then back to Pebble for the afternoon.  Around 2 we decided to go and play 9 holes of golf in order to at least warm up before our Monday round so we headed to Black Horse to tee it up.  After watching two days of pros play and having 4 lessons the day before that there were a ton of swing thoughts going on, so it was good to get them out over 9 holes instead of bringing them all to Pebble.  Nice course, too:

After the round we had yet another treat in store.  We had a chance to meet “The Great One” Wayne Gretzky who had just finished a round with Dustin Johnson: 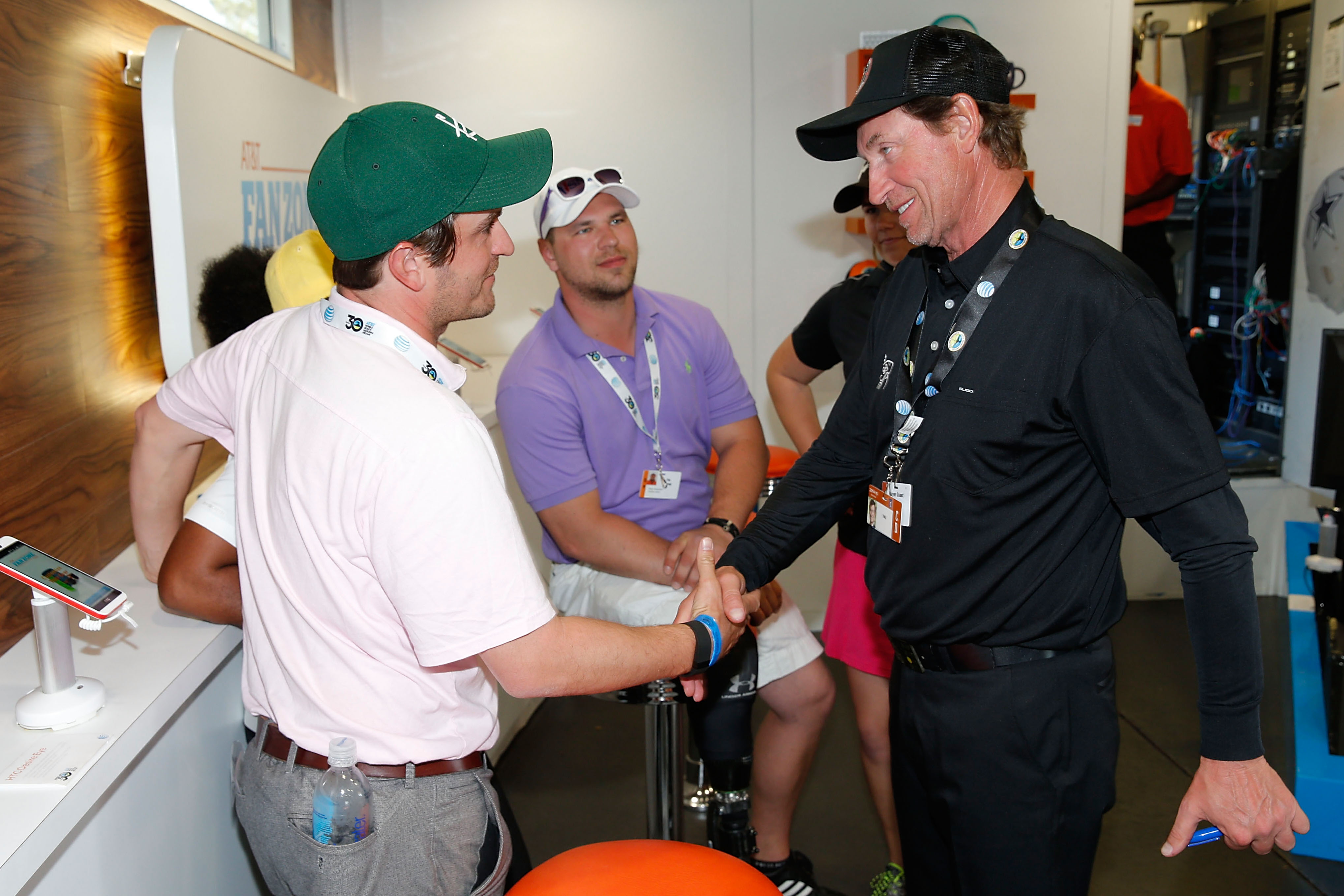 Not the best picture of Wayne, but fun to meet him and chat some golf.

That evening I was beat.  It had been a handful of long days and by the time we got back to the hotel it was about 8pm.  I think I fell to sleep by 9 and didn’t wake until 15 minutes before we were supposed to meet at 7 for our ride back to the course.  It was good to get solid sleep as the sun and excitement of the week to date had caught up to me.  And, I wanted energy for the weekend rounds as well as for Monday.

On Saturday I explored Spyglass throughout the morning, which I could tell was by far the hardest track of this tournament, and from what I hear is perhaps the hardest course in the area.  It is like Pebble, but longer and tree lined with tight fairways.  The scores were nowhere near what they were on the other two courses even though it was again a beautiful day.

I followed Bill Murray and his partner D.A. Points for a few holes and then Larry the Cable Guy for a few.  Both were quite entertaining and Bill was a surprisingly good golfer.  I saw him hit the par 5 first hole on his third shot from 230 yards after having to punch out from under a tree on his second.  He just tossed the wood in the air in a fit of success.  Always the entertainer, he is a fun one to follow.

Later in the day I went over to Pebble to catch up with the rest of the group.  The ladies had been walking behind the ropes with Jordan Spieth all day and I wanted to catch them on the 18th hole as they were walking in.   It sounded like they had a great time and I was excited for my chance to be behind the ropes with Jason Day and Charlie Beljan the next day.

Tim and I arrived early in the day Sunday to check in as Honorable Observers and then hung out until our tee time with Charlie and Jason was about ready.  We were introduced to them both on the first tee and then were excited to get going and watch some great golf first hand: 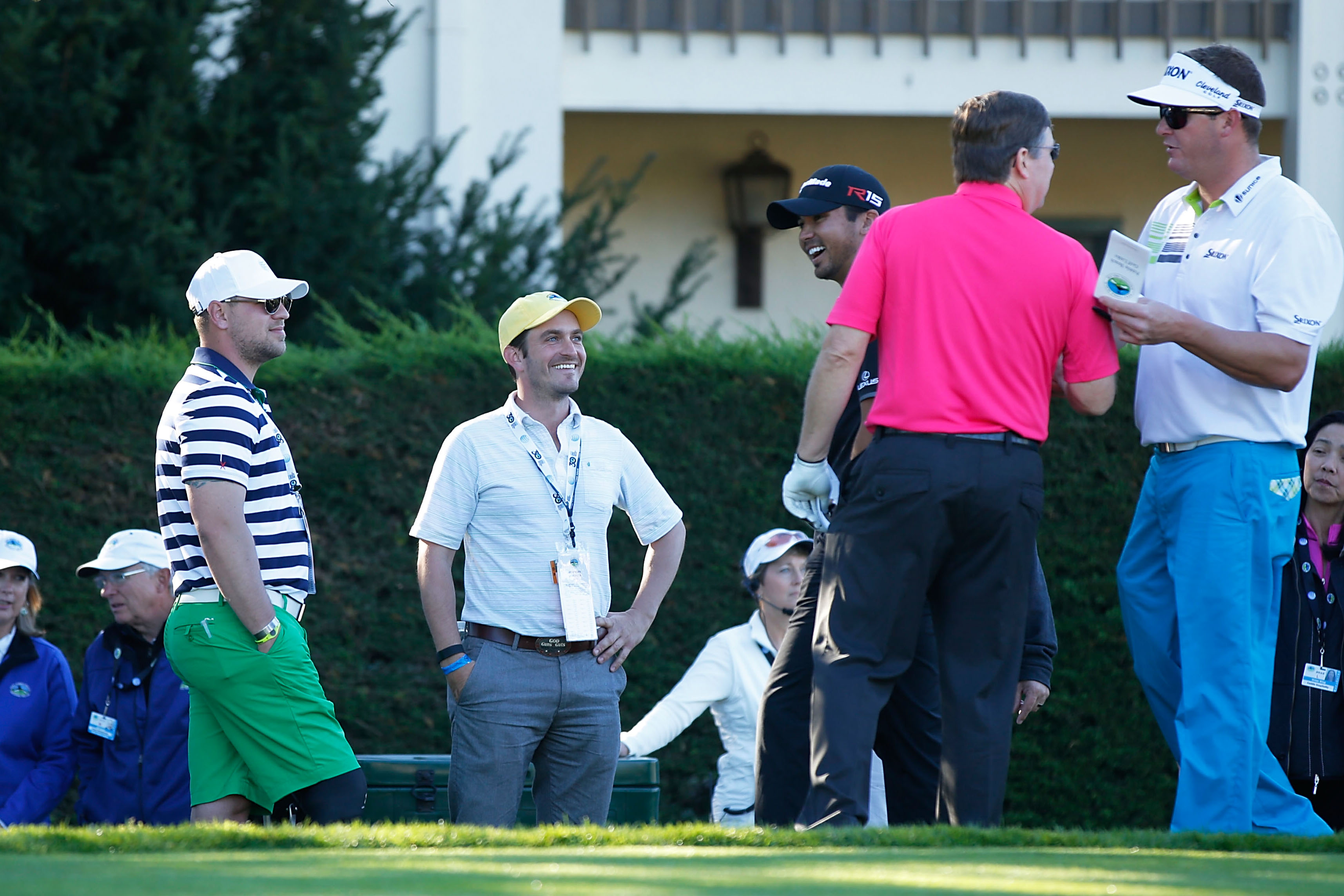 They were both nice guys and once the round started were totally in work mode.  It was Sunday and this was their office.  They were each 6 off the lead at the start of the day and you could tell they were hunting for birds and eagles to catch up and make a push.

On the first hole Jason was in the middle of the fairway and Charlie was blocked by a tree.  I have no clue how he did it, but Beljan managed a great shot and they both ended up on the green.  Here’s Tim and I watching Charlie make his shot: 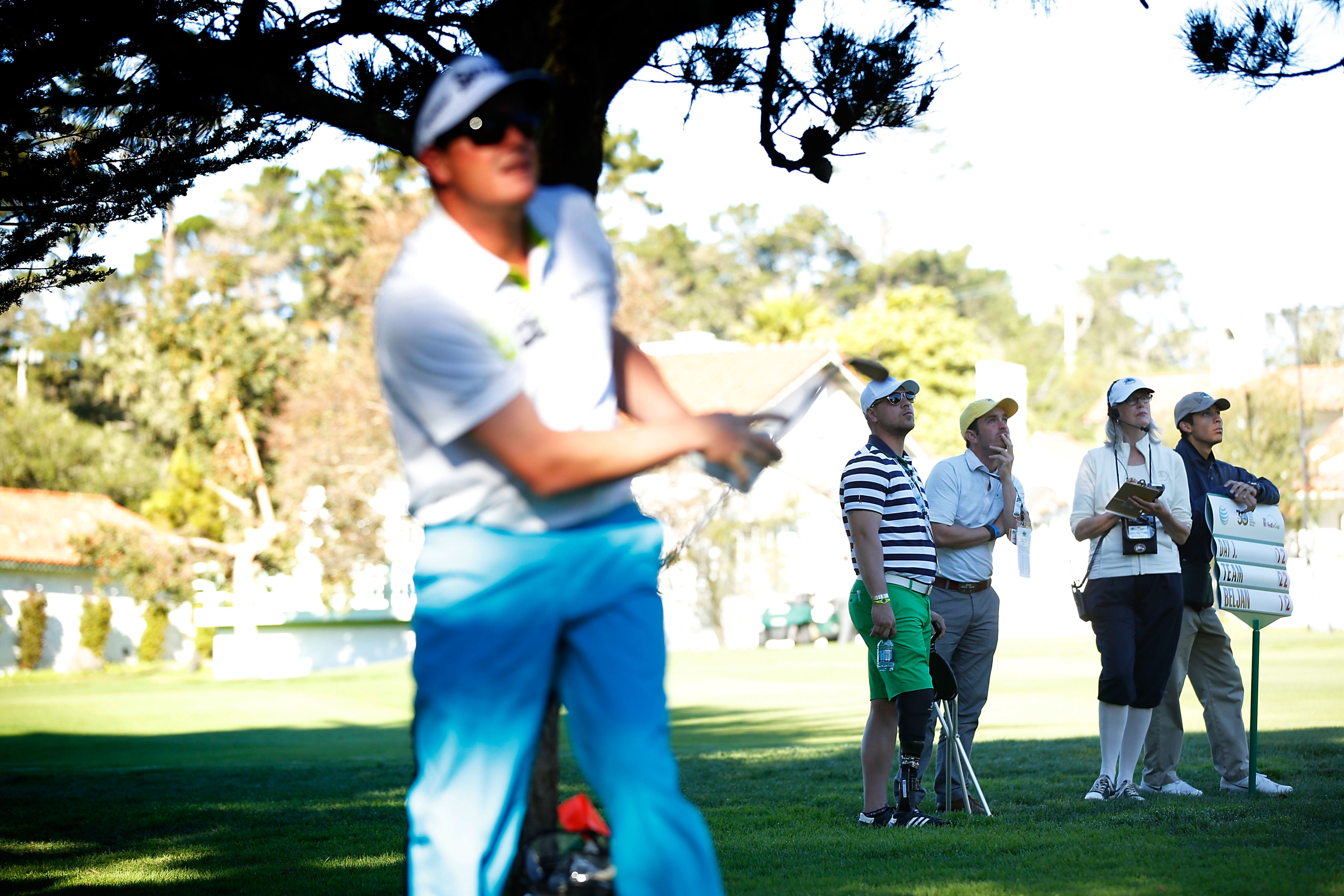 The most impressive part of each of their games, to me, was their long iron play.  They hit their long irons as accurate as I hit my wedges.  Their putting was good, chipping good, driving the ball they hit it far, but the huge difference between where they are and where I am is that fact that 190-230 yards out they are going to stick it to within 20 feet whereas I’m just happy if I hit the green.

Charlie didn’t even have a hybrid or wood.  His set goes from driver to 2-iron and he could really pound that 2-iron.   they both hit the driver within 5 yards of each other and on Pebble didn’t hit driver on that many holes as it’s not a very long course, playing around 6,900 yards.  Even on the par 5 6th hole neither pulled driver and both got on the green in two.  Jason Eagled it from 6′ after having birdied the 5th and then birdied the 7th to bring his score down to 17 under and within 2 of the lead.  Later on Jason had a couple bogeys when he was pushing contention and then ended up 4th overall.  Charlie had a late push and birdied the last 3 holes to end up 3rd overall.  It was great golf on a beautiful Sunday and fun to watch them try and make a charge.

Tim and I walking down the 18th fairway: 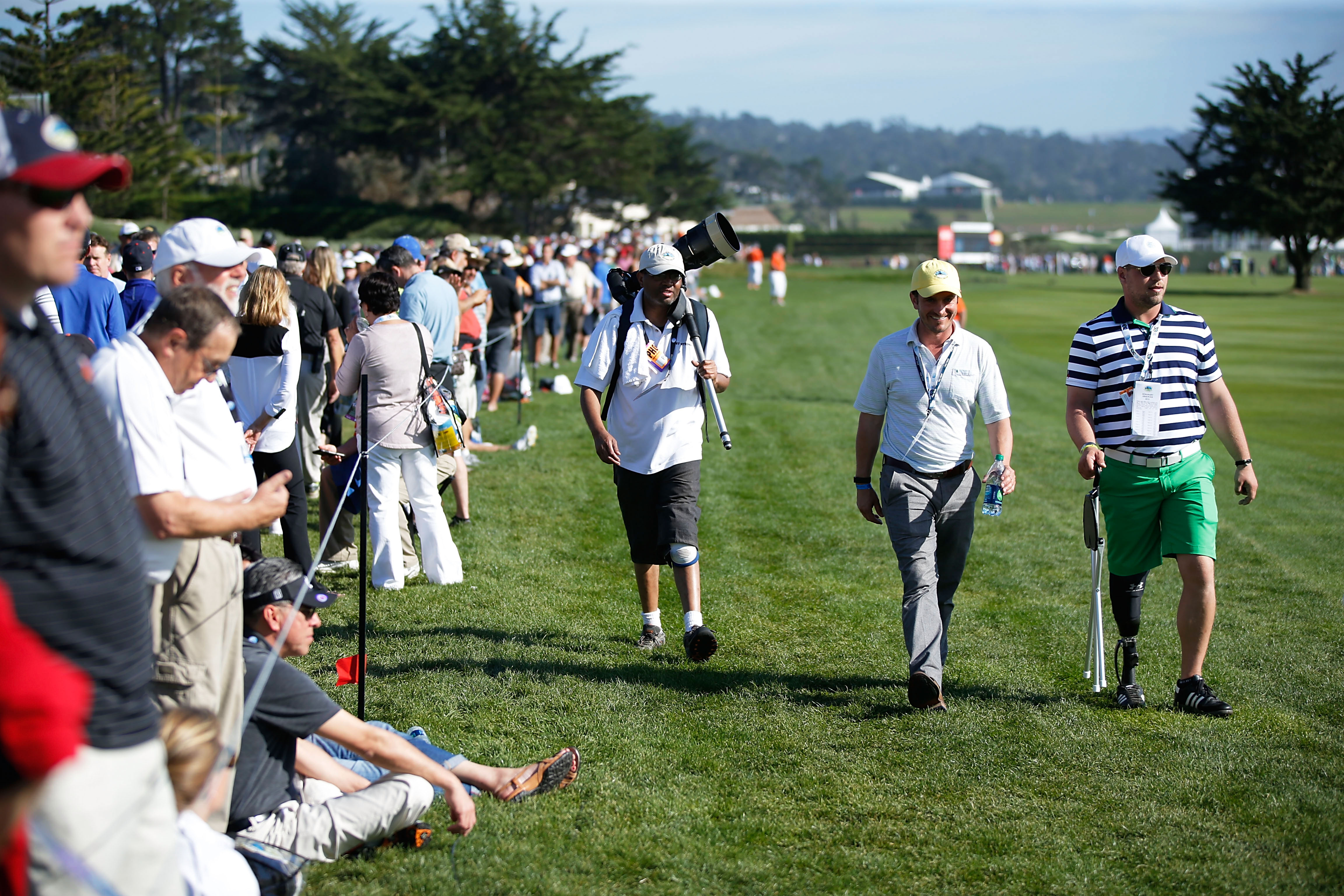 Jason Day hitting his tee shot on the 18th box: 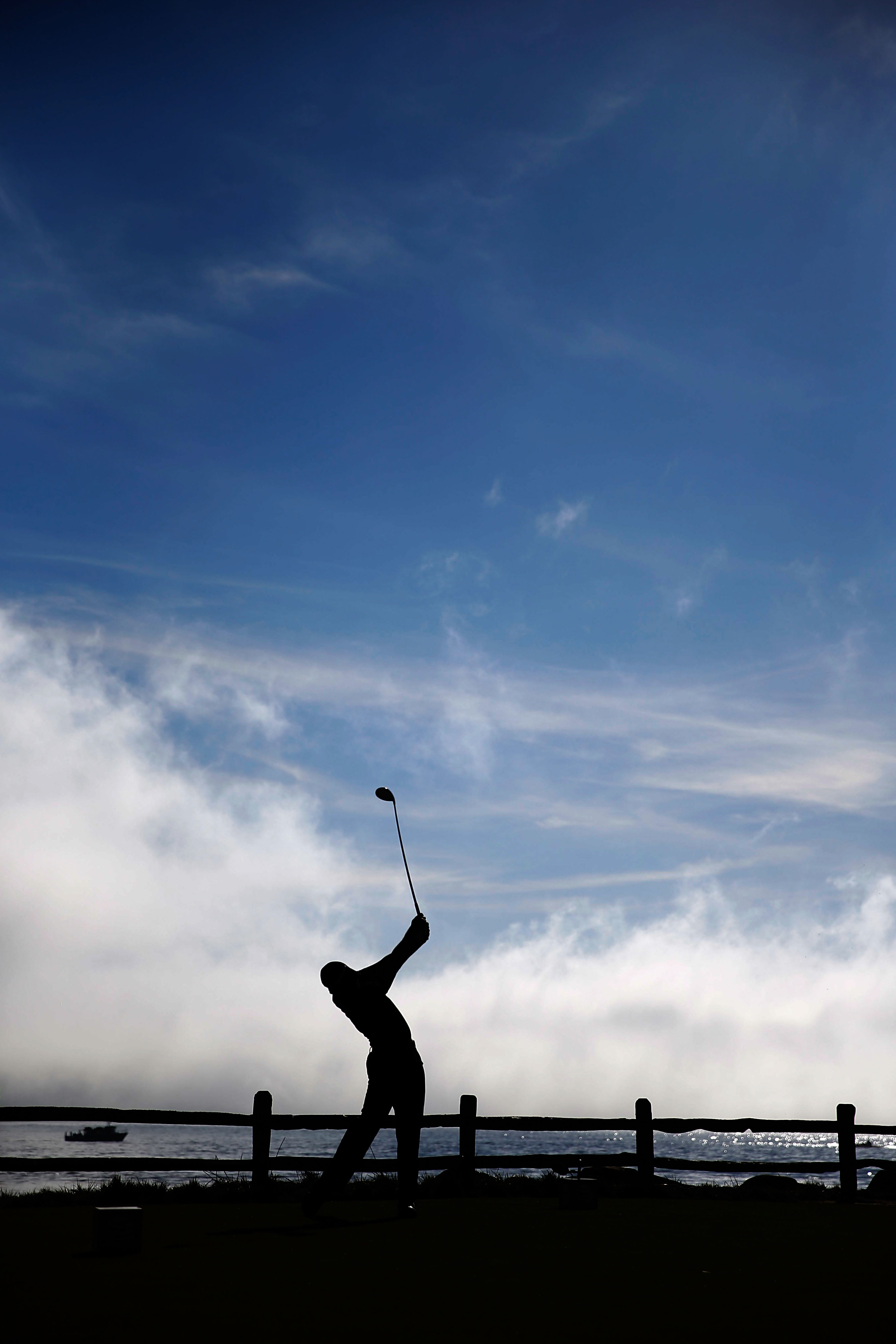 After the round we hung out behind the 18th green for a while and randomly ran into David Feherty, who Tim happens to know through his charity golf outings: 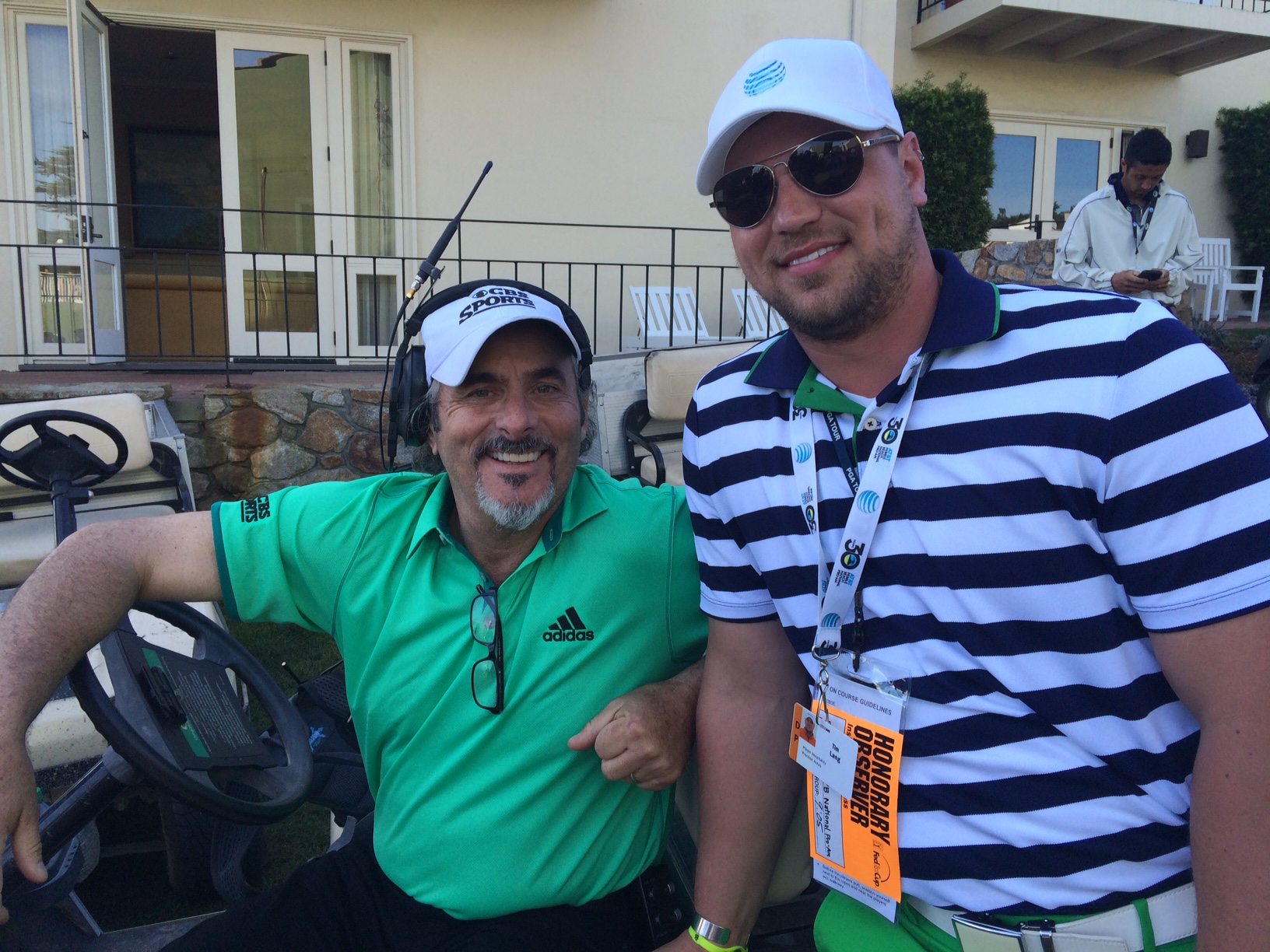 He was a nice guy and quite funny.  I reminded him that he was once quoted about my project and when asked what my chances of making the Tour, he said that “I’ll be generous and say it’s a snowballs chance in hell.”  It gave me a chuckle years ago when he said it so I had to get him to autograph my hat: 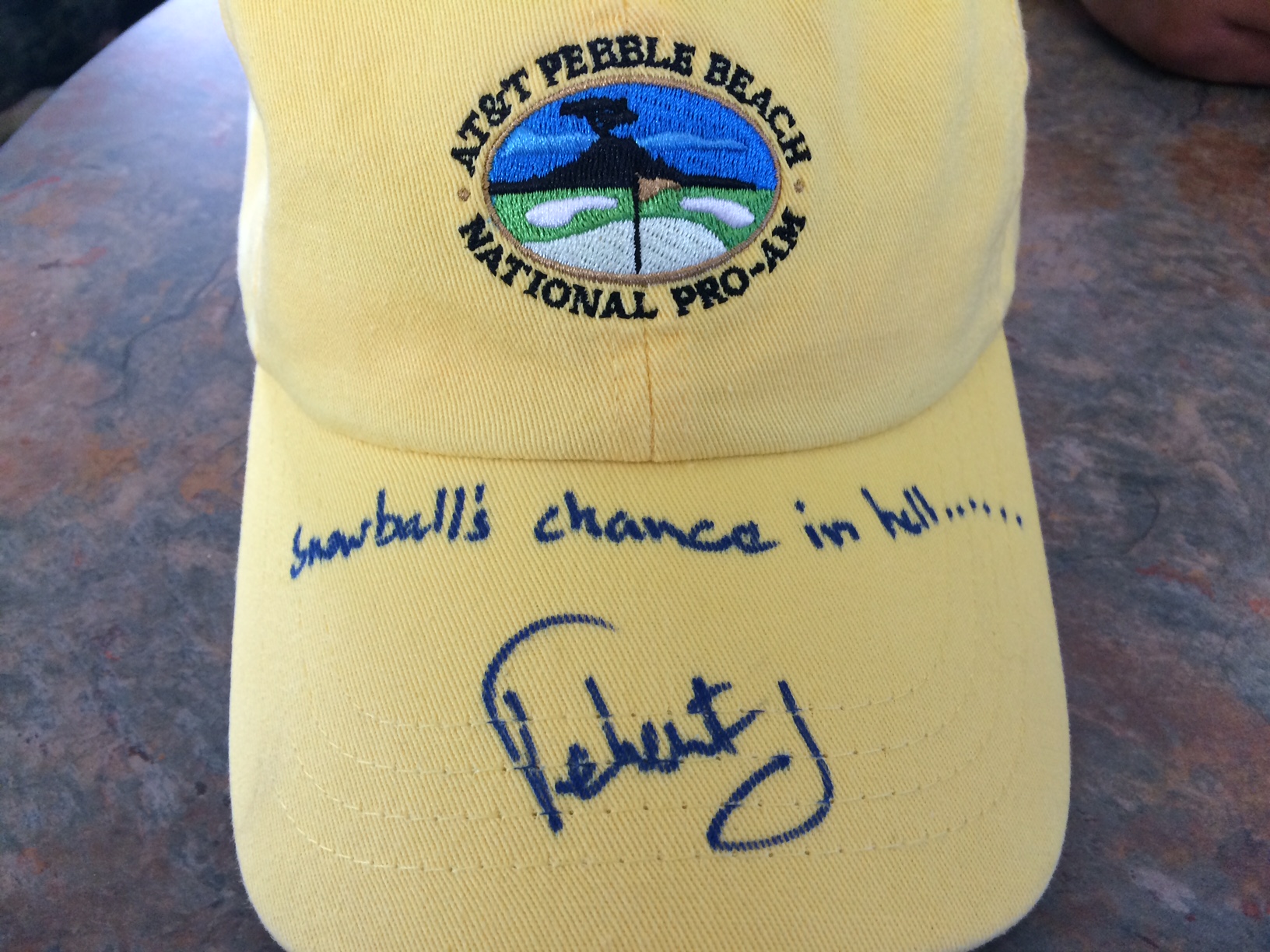 After spending some time behind the 18th we went up to watch the final groups come in and out of nowhere a fog began rolling into the 18th hole.  It went from sunny to where you could barely see half way down the hole in a little over 5 minutes:

Perhaps this was a bad omen for Monday’s weather.  No matter if it was sunny of 60mph winds, nothing was going to keep us from playing this course the next day.

Perhaps I was wrong with the whole “3-part” thing.  This post ended up being much longer than I thought and I haven’t even gotten to the part of playing the course.  So, the fourth, and finally final, piece on Pebble Beach will have to wait until next time…

4 Responses to "The most amazing week, part 3"