I know what you’re going to say, but this isn’t a rebound.  Just because it’s only been a few days since the breakup doesn’t mean I can’t find a new partner.  This isn’t a one night stand, rather a new fling with staying power.  I’ve met a new course and it’s swept me off of my feet.  I promise that I wasn’t seeing this course while I was with CECC and it’s only by fortunate chance that the transition was made so quickly.

I have the tendency to land on my feet and after hearing the CECC news last Saturday I knew that I needed to figure something out and had a few ideas in the back of my head.  A couple months ago a friend invited me out to the course next door to CECC, Riverside Country Club, and I quite enjoyed their facilities.  I hadn’t thought much about it at the time, but after hearing the final verdict at CECC I called around to a few clubs to see what the costs would be to join and then got in touch with the membership lady at Riverside that afternoon.  They had a stellar deal going on which was hard to pass up so I talked with my family about it and decided that it made practical and financial sense to join.  Economically speaking, and judging by what I spent in June while not having a home course, being a member of a club is the only feasible way to financially make The Dan Plan work.

Sunday morning I went in to Riverside and officially joined.  Immediately afterwords I teed it up with a couple of members and despite the 95 degree day I had a blast running around my new home course.

Riverside has some similarities to CECC, but I am not interested in comparing the two.  In all honesty that would be like comparing apples to apples and it really comes down to personal taste.  Whether you like Golden Delicious, Honeycrisp, Cortland or Braeburn is just a matter of personal preference, especially when the courses are literally next door to one another and were built the same year.  I’m sure, though, there are some massively differing opinions on the matter and members at each course would probably tell you conflicting views.  Personally, they are both awesome courses and provide some similar and some different challenges.

The practice facilities at Riverside are pretty similar to CECC too.  There is no par 3 course at Riverside which is something that I will miss, but they do have a cool chipping area where you can make up your own holes from zero to 130 yards with a few bunkers, and a couple different greens to hit to: 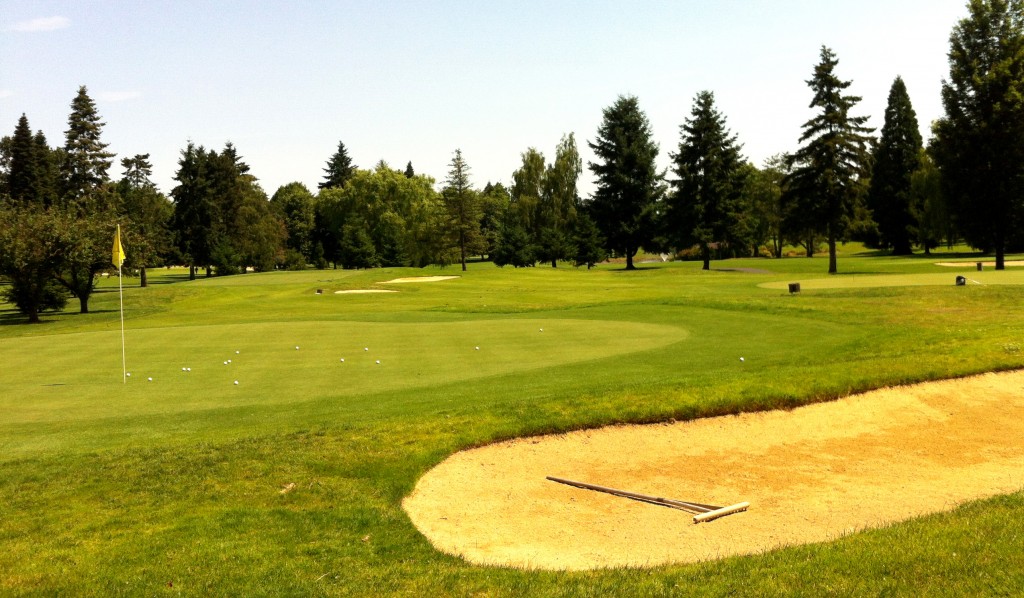 I was out there for about four hours yesterday and didn’t see another soul, just a quiet place to practice the short game.  I have a feeling this may be the spot where I spend a ton of time over the next few years.

The range is pretty cool, too.  On Mondays it was mats only, but a lot of days you hit off of the grass: 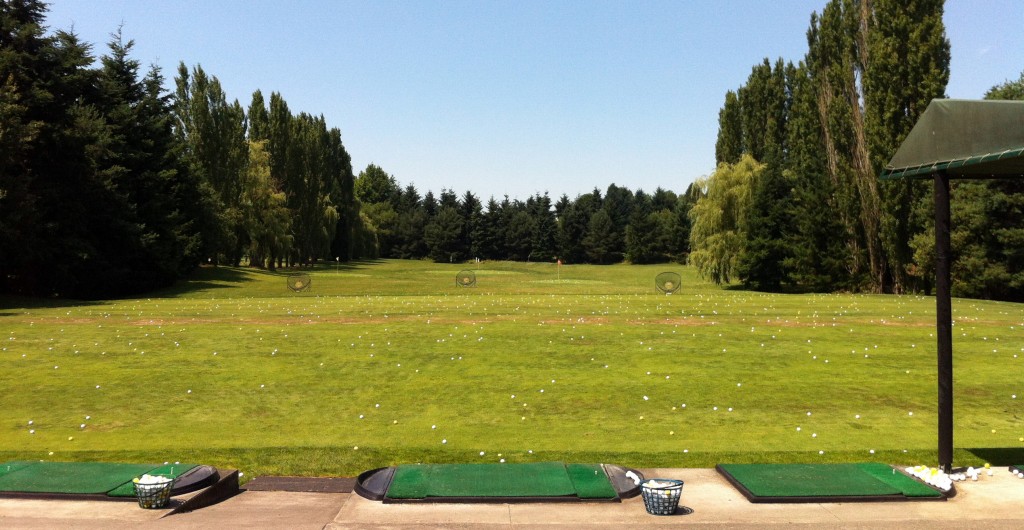 When you practice and play golf on a daily basis it can get expensive very quickly if you don’t have a range and course at hand.  I suppose it depends on what the course costs, but being an intermediate member at Riverside (under 40 years old) is cheaper than paying for two rounds at a local muni a week.  The main benefits aren’t just about cost, though, it’s about having that range, good putting greens, and the chipping area where you can work on the most important aspect of the game: the short game.

The first 30 years of my life I never would have thought I would be a member of a country club, but now that I have become obsessed with golf and improving my golfing game I cannot see it any other way.  Don’t get me wrong, it is possible to improve one’s game at the local muni course (I still and will forever love practicing and playing at Heron Lakes) but for my goals and what I want to do on a daily basis a country club can optimize that experience.  I know Seve did it with a 5-iron on the beach, but I’m sure if he had access to a place like Riverside or CECC he would have been there every day honing those skills.

I am excited to have a new home and already feel that the change will be good as it’s a new environment to learn in and new people to challenge as well as no established tendencies or behaviors.  There is a lot to be excited about and a whole new world to start exploring.

I would like to thank CECC once again for everything that they provided and did for me over the past two years.  You are all amazing and I hope to see everyone again one day soon.  Again, I am not interested in comparing the two facilities and think that anyone interested should check them both out.  Every course and club has it’s pros and cons and it’s up to the individual to find the best fit.  I am excited about Riverside as I was about CECC when I first went out there.  You really can’t go wrong being a member at either course.

Not that there was anything that I omitted over the past two years, but one added benefit of being a paying member of a club is that I can freely talk about all of the aspects of country club life.  I didn’t grow up in anything like this and at times feel like a stranger in foreign lands but never wanted to step on anyone’s toes.  Having no affiliations with any club or products I can truly tell it as it is in the golfing world.  I will try and write my experiences at the new club like a travel guide to Mars.  The goal is to take you with my on this new journey.

Before that all begins, here is one more picture of the new home course: pushing my Clicgear up the 18th fairway.  Pretty nice view

18 Responses to "The new home of The Dan Plan"