Today I realized that there has been a major shift in my philosophy on golf “scoring.”

This thought came just after the 11th hole at Riverside.  I bogeyed that hole with a missed green on the par 3 at Riverside and a tap in bogey (lipped out the par) and I thought “okay, 7 more holes to get some strokes back.”

Last year, if I was 7 over after 11 holes (shot a 42 on the front, total slop show) I would have been thinking that I could hold on and get a decent round from the outing.  Today, and now, my mind’s thought structure was telling me that there were 7 holes left to get some strokes back. It wasn’t that I was telling myself to think this; rather, that was the thought in my head and I realized while walking off the green that there had been a shift in my overall philosophical approach to the game.

Without realizing it at the time, I focussed a bit harder and ended up shooting one under for the remaining 7 holes to card a 78 on the day.

Afterwords, I realized that it was the new approach that allowed me to go low at the end of the round rather than trying to hold, which typically produced less fluid and tighter shots.

My thought of the day on this is that while loose lips sink ships, tight grips cause…  well, bad golf scores.  The approach matters so much in this game and if you are trying to hold on to something you have in hand rather than focussing on improving upon your overall position bad things can and will happen.

The secret, I think, is to approach the round like you want to get strokes back from the very first tee.  Never try to hold on, rather look for ways to make your move from the very get go.

I’ll see how this works with a  full round soon, although this has been my overall outlook for the past, perhaps, couple of months.

On an unrelated note, I’ve been looking more into the trip south for the winter.  If all works well I will be in San Diego/LA around December 14.  Let me know if anyone wants to tee it up while down there.

Over and out, although two pictures first and a link to some golf clubs for sale:

What would you do with this one?  Overhand branches make a flop shot impossible and a bunker on the right with a short sided fast green…  In total, it was about 20 yards from ball to green. 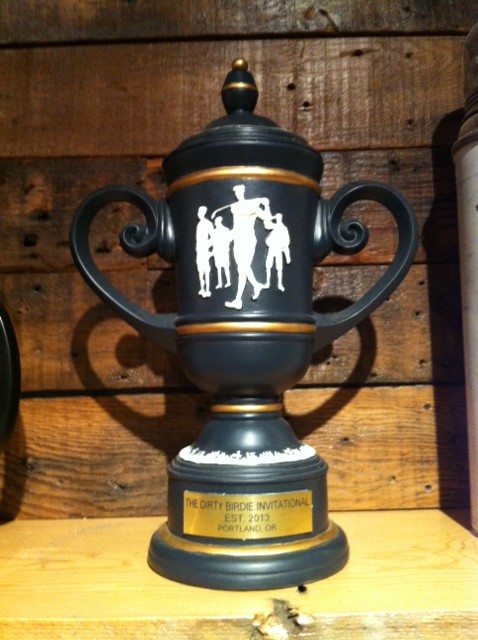 My team’s trophy for my first solid scramble victory!  it was about two months ago, but we killed it and shot a team 59 or something silly like that.  A fun outing and hopefully we will repeat next year.

And, here are some sticks for sale.  I’m looking to purchase a new hybrid and am thinking about the new Nike, so I don’t feel too bad about selling these sticks:

There is no minimum, so bid away and hopefully grab yourself a set of solid lefty sticks for cheap!  Plus, they are a bit of Dan Plan history, which hopefully will mean something big one day down the road.  No promises, you just have to believe with me.  Anything is possible.

Thank you all as always for paying attention and following the dream.

3 Responses to "Thoughts on golf scoring."