It’s a good feeling to be out on the practice greens until after 6 pm again.  Seems like ages since the good days of last summer where you could putt besides your mile-long shadow until 9:30 in the eve.  Insert nostalgia photo here: 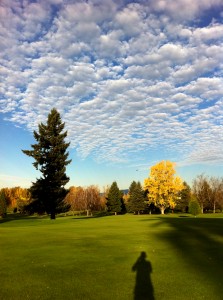 Those days have been greatly missed but today (or yesterday, technically) was a wonderful step in the right direction.  And, spring officially starts next week, another reason to celebrate.  I’m glad to be departing from the days of winter where there was the almost constant rain, the weeks of sub-40 days, frozen greens and the sun setting at 4 pm.  In all honesty, I didn’t mind the cold and am used to Portland’s rain, but the sun going down so early always gets under my skin.  It’s like having overly strict parents enforcing an unusually strict curfew.  Who wants to stop playing/training before dinner time?  not me, not me.

I could avoid this predicament next year by traveling south to practice, and that is a realistic option.  I would just have to sublet my place and find an affordable room somewhere in southern California, Arizona, Florida, Texas, etc.  I truly love Portland, but am willing to do whatever I need to do to get as good as possible and if avoiding the Pacific Northwest for a few months is what is needed then that’s what I’ll do.

There is no need to worry about that right now, though.  It’s just about time this city starts coming alive!  Summer, here we come.

I played ok today, not much to write about that, but two days ago I had my best 27-holes to date.  After playing nine holes from 50 yards, 75 yards and 100 yards I was one over from each.  I’ve shot even from those distance before, but I have never had three concurrent rounds clock in this low.  It’s a new record and a place where I can set the bar for future rounds.  Hopefully, I will hit my first sub-par round soon (from 50, 75 and 100) and then keep them down there.

I’m at a point where I know that I need to improve on everything, but there are certain things that jump out as being of higher importance.  Putting is one of those, lag putts in particular.  Also, distance control with my pitching game and getting the club to be closed at impact.  If I worked on getting those things to consistent, I am sure I could shoot a few under par.  I’m not sure if it’s me or the greens, but lately all my putts have been coming up a couple inches short.  Granted, the greens are soaked, sanded, seeded and pock-marked, but that doesn’t mean that I can leave the ball short.  There are a few truths in golf and one of them is that you are not going to sink a ball if you leave your putt short.  So, I spent a few hours working on lags lately and my distance has improved.  Today I holed out three putts from more than 30 feet.  Tomorrow, I’m starting the day with some pitching work, trying to get that club-face nice and square at impact, and then will lag around the putting green for a couple hours.   You can never have too much time on the putting green.