I love tournament golf; the nerves, preparation, competition and post-round comradery (camaraderie) are unparalleled.  It’s a four hour battle that when embraced is non-stop, edge-of-your-seat style intensity.  It’s just like regular golf, while at the same time completely different.  Every shot is a puzzle begging to be figured out.  Hit good shots and you are rewarded, hit it a bit off and you might have an entirely different puzzle before you.  It’s simply an amazing experience and something that I’ve never felt outside of golf.  I have been nervous and excited for plenty of things in life, but haven’t felt the extensiveness of the emotions that happen through a round of tournament golf.

I never realized how much I actually enjoy the competitions until this weekend and I think it might be a new sign.  The feeling of playing in them reminds me of when I first played a par 3 nine hole course back in Nebraska with my brother.  I was nervous and excited through the entire round, played like crap and as soon as we finished all I wanted to do was start over and do it again.

This past weekend I played in the Oregon Mid-Amateur.  The Mid-Am is similar to the Oregon Amateur except you have to be at least 25 years old to enter.  I suppose the point is to take it out of the hands of the college kids.  Whatever the reason for the age limit, it still brings out a field of great golfers (you have to be about a 5 handicap or lower to enter) and the course is usually tricked out and in excellent shape.  That was definitely the case for this one down at Emerald Valley in Creswell, OR.

I had never played Emerald Valley, but through the practice round on Friday and entering into the tourney I could see that it was going to be a really fun and challenging track.  The greens are much more sloped than the courses I usually tee it at in Portland and they were firm and fast.  If you ended up above the hole on a lot of them it was a struggle to two-putt.  The fairways were firm too, so a good shot would release and become a great shot.  It was prime time and the track was mint.

On Friday night I was nervous entering into the tourney and had some negative thoughts as I had been struggling with tee shots lately, again, and was focussing on that instead of positives.  But, I roomed with a friend who has a good amateur golf career from qualifying for the USGA Mid-Am to winning his club championship 6 times.  He was so happy and excited to be playing in the Mid-Am that he said he would probably wake up at 4am ready to go.  I thought a lot about his excitement and realized that I needed to embrace the challenge rather than think of it as something I could potentially mess up.

At that moment I began to see tournament golf in a new light and immediately the excitement started taking over.  I didn’t know what would happen, but I was down there and couldn’t wait to go.  I teed off on the back side of the course and was ecstatic to be playing golf on a beautiful summer morning: 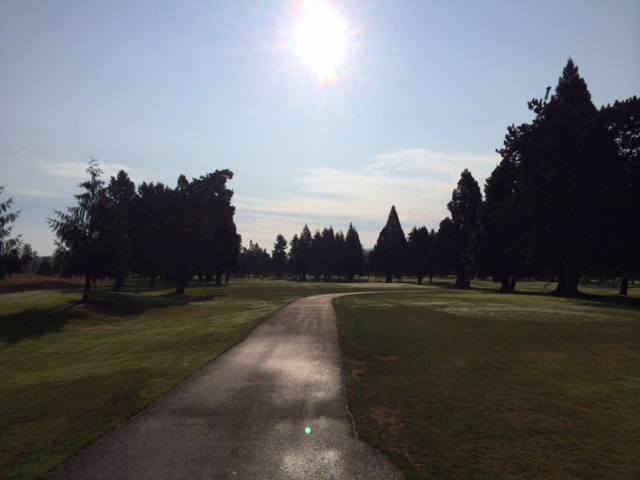 I was excited, but the nerves were evident in that I tried to guide my shots way too much on the first few holes which created a rough start to the two-day tournament.  But, this time, and for the first time in my golf career, I embraced the feeling of the nerves and appreciated everything that was going on in a more analytical way.  Still, it took 6 holes and a rather bizarre happening to really get into the flow of my game.  The start:

2. Pulled an iron into the bunker on a par 3.  Hit it out and decently close, two putts for a bogey.

3. Hooked a 3-wood into the trees. Punched out and then hit it on. Two putts for a bogey.

4. Finally hit a good tee shot.  Laid up and then hit the green and two putted for a par on a par 5.

5. Pulled the 3-wood into the trees.  Thought I had a line and hit a shot that I was not fully committed to, which ended up clipping a hill and bounding into the hazard. Took a drop from 100 yards and hit the front part of the green but it rolled out to the back as it came from the rough.  Hit a sub-optimal chip and then 2-putted for a triple.

6. Pulled the 3-wood right again and had to punch out.  Hit it to the back of the green which was very sloped and my putt rolled 15 feet past the hole, then two putted for a double.

At this point I had hit mostly tight-gripped nervous shots and was scrambling to get things back into fairways and onto greens.  My approach shots were hit lightly, too, which didn’t put enough spin on the ball so when it landed the ball was releasing through the greens.  It was a bad combo and took this next event to get me to calm down and start playing my golf.

I hit a decent tee shot on the 7th but again pulled it towards the right and the ball ended up in a fairway bunker.  I was about 160 yards out and from a bunker that’s my 7-iron. It’s a shot I’ve hit plenty in my career and I put a good easy 3/4 swing on it, but the strangest noise happened at impact.  I heard a clank and a pop then something hit the lip in front of me and went flying into the air.  I thought it was the ball then I saw the ball come back down and land maybe 5 yards from where I hit it. I looked over and it was the head of my 7-iron that had snapped off and almost hit my playing partner.  Somehow the KBS Tour shaft snapped through the soft sand leaving this: 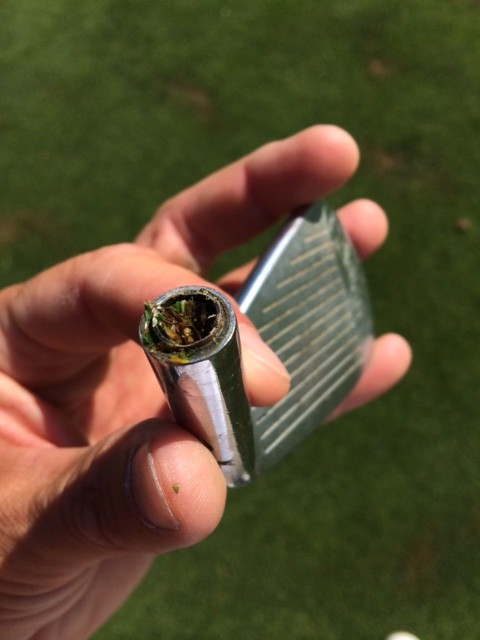 Honestly, I couldn’t help but laugh and I think it was just what I needed to relax.  I hit an 8-iron to the front of the green (could have used a 7

) and two putted for a bogey.  I was 10 over through 7 holes which wasn’t where I wanted to be and was pretty similar to the last 2-day tourney I played in, but I took a deep breath and started playing some golf.  I ended up shooting an 87 on the day which if I just look at the score was disappointing, but I am learning how to embrace the challenge of tournament golf and with the help of the Vision54 coaching also am starting to find some swing feels and play boxes that work under pressure.  I learned through those first holes a few things that are not optimal for me when under the gun and have noted them.  It’s a work in progress, but I am also taking note of what does work and collecting that info in my yardage book.  Eventually I will have 4 or 5 tried and true swing thoughts that I can utilize.

The most important thing I realized, though, was that I really love tournament golf.  There is nothing like it and immediately after that round I couldn’t wait to go back out.  It was hard to sleep that night as I was even more excited to get back to it and experience the ride again.  I knew I was out of it score-wise, but I also knew I could learn more and hit some better shots the next day.  All I wanted to do was get back out there under the gun and hit some shots.

Despite my best efforts to enter day two with the mindset I had through the last 11 holes of day one, my body and grip were far from relaxed for the first few holes of the second day.  I played a hell of a lot better but ran into a bit of trouble with two doubles in a row on the 4th and 5th hole, which are pretty tough holes on the back 9 of that course (I started on the back 9 again).  I shot a 42 that go around which was 5 strokes better than the day before.  The rest of the day went pretty well although I didn’t get a birdie for the entire 36 hole tournament.  I shot a 38 on the second 9 to improve from an 87 to an 80.  Of the 75 guys who played in the event (about 12 withdrew after Saturday, I can only guess because of high scores or something similar) I ended up in 45th place.  My goal was to be in the 30s so I missed the mark by a few strokes, but am very proud of the improvement I made from day one to day two.

I think that in the past I was trying to avoid the pressure and nerves and struggled with what it meant to play in events, but I finally learned to accept and appreciate those feelings this weekend.  And, not just accept them, but to fully embrace the challenge.  There are plenty more events coming up to continue working on this.  And work I will do.