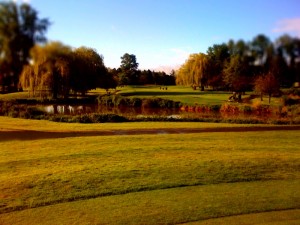 Went to a new public course today. Heron Lakes is a beautiful course in North Portland

Tuesdays at the place I worked before beginning The Plan were always my least favorite days.  It wasn’t quite the middle of the week, there wasn’t the freshness of Monday around and the day just felt like it lasted forever.  Not so anymore.

Today I realized that Tuesday is my favorite day of the week.  It’s those days that I have no obligations other than going out and practicing golf as much as I can.  Mondays, Wednesdays and Fridays are my workout days, so I go to the gym in the middle of the day.  I don’t mind working out, in fact have found it quite enjoyable, but it’s just another “thing” to have to do that keeps me from practicing.  Thursdays aren’t too shabby either, but those are the days that I meet up with the golf coach, which is also a good thing, but is a 30 mile drive to where his course is, so I end up spending over an hour in the car.  Tuesdays are completely free to practice, as much as possible and for as long as I can keep my concentration.

Today’s Tuesday was a good Tuesday.  I got wet in some early morning downpours, but then the sun came out and my surrounding out at Heron Lakes were fairly astonishing.  It is a public course in North Portland and I was surprised at how nice it is out there.  Perhaps the fact that there were multiple rainbows in the morning sunlight helped a bit, but still, it is a good spot to escape the city for a bit.

After spending the morning out at Heron, I came home to eat a bit and relax the back.  It was still bothering me, but I had taken an aleve that I think helped.  It wasn’t nearly as bad as Monday, so I guess that means no more digging holes on my “rest” day of Sunday.  I new I should have taken it a bit easier, but the weather was so perfect on Sunday and I really wanted to plant some things in the front yard, so went for it.  From now on, though, Sunday is a non-lifting/digging day and if I have the urge to plant a tree, it will have to be done on Saturday.

Also, today was much more productive in the sense of making shots day.  I think that the new stance that coach told me to do had finally sunk in.  Either that or I have reverted to my old way of standing, but it still feels a little off, so I am pretty sure I’m still doing the new one.  The head pro over at Broadmoor (went there for the afternoon and got dumped on by rain again..) shouted out that I was swinging better, so something must be new.

Feeling like I’m about to fall to sleep, so I better cook some dinner and take care of some things around the house.  Tomorrow is going to be a good day, but there is a lot to do.  Have about three hours in the AM to golf, then hit the gym and then head down to see Darren Painter at the Synergy Training Center to begin a “Cognitive Performance” circuit.  I’m excited to be able to have Darren on the team and will know a lot more about what his program entails soon.