In the three days of practice/playing since crossing the half-way point of the 10,000 hours of deliberate practice I have already played two tournament rounds.  In both of them I shot in the 70s (pretty easily, although the second round was a bit more of a scramble) but managed to hit just one or two good tee shots over the 36 holes.

As I mentioned in the last post, the mental game is going to be a crucial stepping stone over the next 5,000 hours.  The first way I see that playing a role is through the ability to reflect on tournaments in order to analyze what went right and what I can do to improve upon the other areas.

Over both tourney days my game from 100 yards and in was solid.  At worst I knocked it on and two-putted so I never made any big mistakes from close to the pin and very often got an up-and-down saving me from potentially large numbers.  I putted extremely well on the first round and pretty good on the second.  And, my short to mid irons were roughly average for where I currently stand.

What I can improve upon the most was tee shots.  This is a common theme with me and one that I intend to consistently improve over the next four years.  Starting today.

I had a good mindset going into the rounds and felt relatively relaxed.  I also had decided to have an external focus and to visualize each shot before hitting them.  I executed this well, but still managed to miss almost every single fairway.

Here is a list of how my tee shots faired:

I shot a 75 on the round despite having to punch out on about 6 holes.   It was a scrambling day and one that could have easily been in the middle 80s had I not been having a good wedge and putter day.  This is stressful golf and although it’s fun to be tested at times it’s also nice to have an easy ball striking day where the main concern is making putts.

The next round was at Langdon, which is pretty wide open except for a few holes where OB plays a role on one side of the fairway, and I actually managed to hit my tee shots worse.  I didn’t really think that would be possible, but here is how tourney two went from the tees:

I shot a 78 despite my tee shots wanting me to score in the high 80s and could have even been lower if I was putting well.  I had a couple of 3-putts on the day, but technically they started from the fringe so are counted as 2-putts.

The point is that I need to hit more fairways.  Over 36 tournament holes I hit the fairway with the driver 3 times (not counting when the ball was topped and barely past the red tees) and hit it once with the 3-wood.  I had actively decided to hit the 3-wood more often as I thought I could be more consistent with it and neither course is overly long, but that did not prove to be the case.  Both of those sticks continue to be a mystery to me and outside of the random round where I hit the driver well (maybe one out of 6 or 7 rounds) they consistently keep me from reaching my true golfing ability.

I recognize that this is where my time needs to be focussed right now, although admit that I am unsure exactly what I need to be doing.  What I do know is that my tee-shot accuracy to date has not been improving at an acceptable rate so it’s time to start thinking outside the box on this one.  Anything and everything will be considered.  In the past year my iron striking and short game have gotten significantly better, but I have not improved out of the box.

Time to change this.

I decided to go to RedTail golf course in Beaverton today to get on the TrackMan and try out some different big sticks.  I’m not necessarily saying that my gamer Titleist isn’t going to stay in the bag, but I haven’t specifically gone to hit a variety of drivers since before my Titleist days began about a year ago and I was curious what everything out there felt like.

After I warmed up we turned TrackMan on and I was very pleasantly surprised with my swing speed numbers.  I haven’t been on a ball flight monitor since late 2013 and in the past I always struggled with getting my driver over about 102mph.  To be honest, not being able to increase my swing speed has been one of my biggest golf fears.  But, today I wasn’t trying to kill it and was getting this type of result: 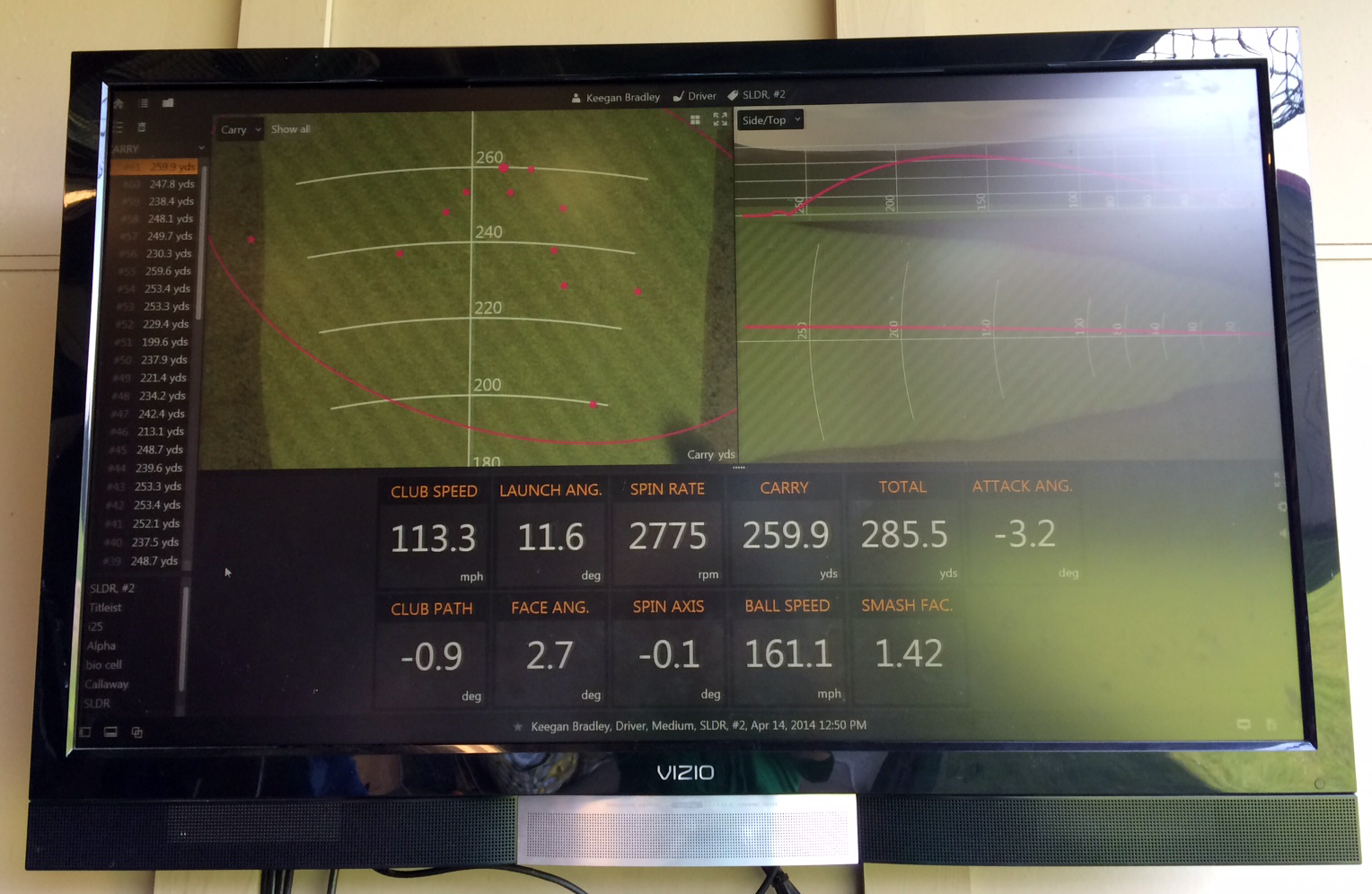 That was a hugely pleasant surprise.  With different drivers/shafts my swing was consistently between 108mph and 114mph.  That has been my swing speed goal since day one and I think my mechanics work has been paying off as I felt like I was swinging with the same, if not less, effort as when I was topping out at 103mph.

Now I just need to start hitting up some on the ball and connecting solidly and we’ll be playing some good golf.

I tried out a number of drivers and found a few I liked, but before I go into all of that I’m going to demo them on the course for a couple rounds.

The interesting thing is that when I put the same shaft as my current driver in other heads I got the same result I get now:  too much spin leading to a short drive.  The guy there said my gamer shaft is for higher launch and higher spin, two things that I don’t tend to struggle with.

For now it’s back to work, this is a long exploration piece that involves a lot of work with both the swing and fine tuning the right club to match that swing.  Will be posting as I figure things out.

9 Responses to "Two golf tournaments and some tee shot thoughts"