This past weekend I attended a three day Vision54 course in San Diego and was refreshed on the beauty of their program as well as invigorated and inspired by them once again.  I attended a two day course of theirs in Denver earlier this summer; for an intro into what Vision54 is and about that trip click here:   http://thedanplan.com/a-transformative-time-and-things-begin-again/

Denver was an amazing experience and has helped me immensely when it comes to playing my best golf now as well as making a distinction between practice and play.  Too often I muddled that distinction leaving my mind in the wrong place when it came to game time.  That has been pointed out to me, but I always figured that if you wanted to implement something you should think about it on the range and while playing.  I learned this weekend that is not the best way to approach progress.

Going through the program a second time was more than just a refresher of the material.  It added so much clarity to their research as well as what I needed to personal do to improve, it was akin to rubbing the morning eyes.  You know when you first wake up and open your eyes and everything is there but kind of blurry?  Then you give them a little rub and the images become clear?  It was just like that.  Denver was the first light, San Diego the clarity.  Not to say that I couldn’t have gotten clarity from the Denver course, but for me it was good to have more one-on-one time with the coached to better understand the process.

This was particularly the case as they knew me this time and knew my tendencies as well as what I had changed since the last time we all met.  They could see that I had been working hard on changing my swing, but they also discovered that my “swing thought” during current rounds was all about making changes and not about engaging in the target and my swing.  I was so technically oriented that I had been forgetting about playing the game when on course.  I admit that I am guilty of this and as I said above, when I am making a change the only thing I think about is making that change.  For better or worse this has been my experience through the past 4 years.

Over the three days we covered so much material that I am not going to come close to summarizing in one blog post, but one thing that resonated was this ability to switch from practice mode to game time and how to make that switch realistic as well as doing it without worrying about “reverting” to old swing habits.  The point is to really delineate the difference between practice time and game time.  As an example they showed me how I could break a round into both practice and play.  For 9 holes I just work on the new feel that I am trying to implement without any concern for the outcome and then on the second 9 turn it into a competition and true game time.  It is very important to always work on playing the game, not just improving the swing.

We worked on a huge number of tools for practice and playing and by the end of the trip I had built a solid game plan for moving forward.  Another realization that I had was I had not been developing a clear enough focus while on the course.  I had been playing with a handful of “goals” but not really one or two specific aspects that I wanted to work on.  Now, each time I leave practice mode and enter game time I will have a specifically focussed goal.  That could be anything from being fully engaged in every swing, building awareness of grip pressure, staying positive or neutral towards outcomes, enjoying the round no matter the score, paying attention to my balance, or trying to just hit cut shots.  Whatever it is, my goal is to pick one or two things and truly pay attention to those through the entire round.

The class was a 3 day course at Grand Del Mar which was one of the more special places that I have played golf.  A Fazio design course about 15 miles outside of San Diego it was the type of place that I would love to live and train at if funds were unlimited.  The views: 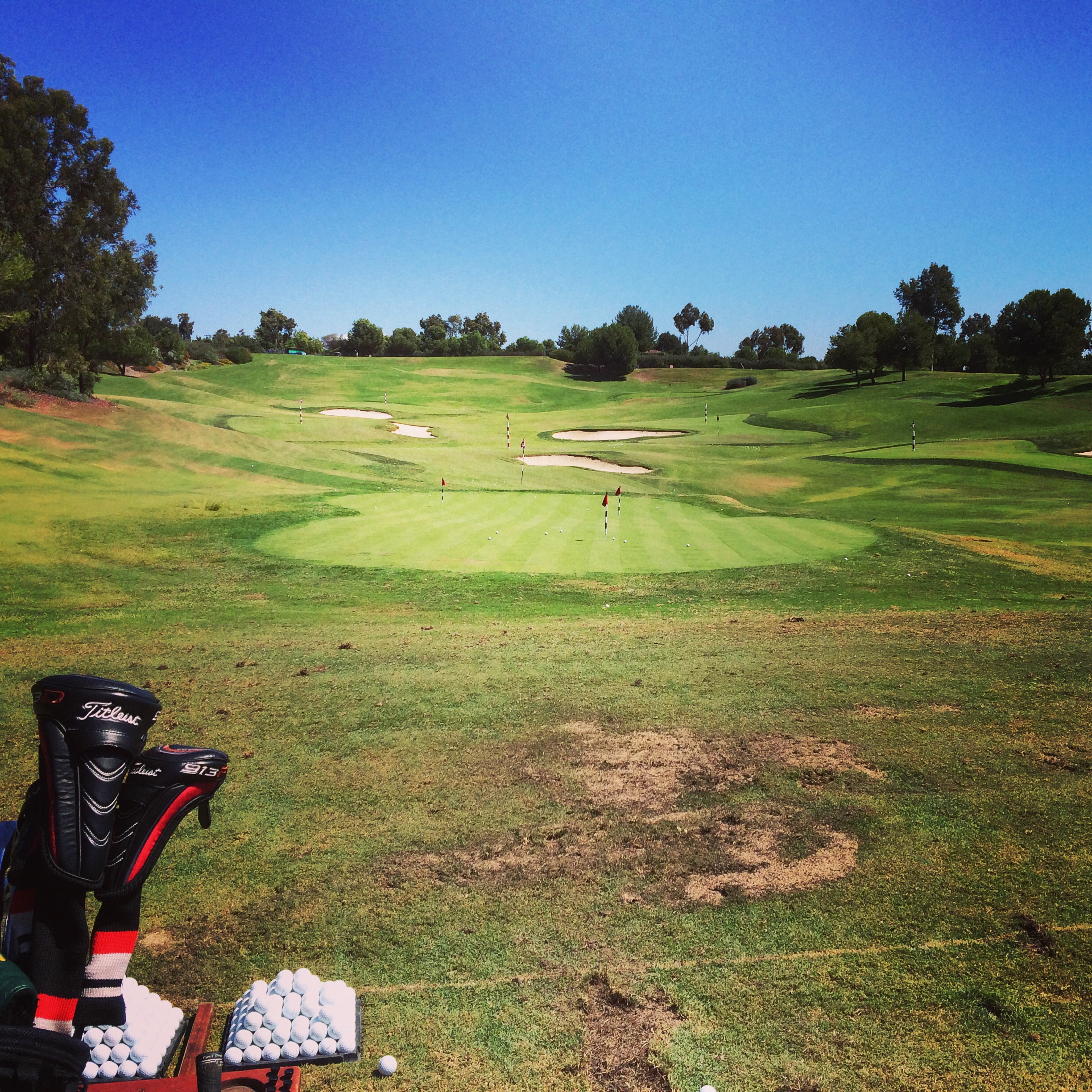 What a range!  You could hit ball from 3 different parts of the range (front, back, side) and it was loaded with Pro V1s.  One of the best ranges I have hit balls on.

The approach on the 18th hole.  Great view of the clubhouse coming in and a fun hole with water coming into play and solid Fazio-designed bunkers all over the place. 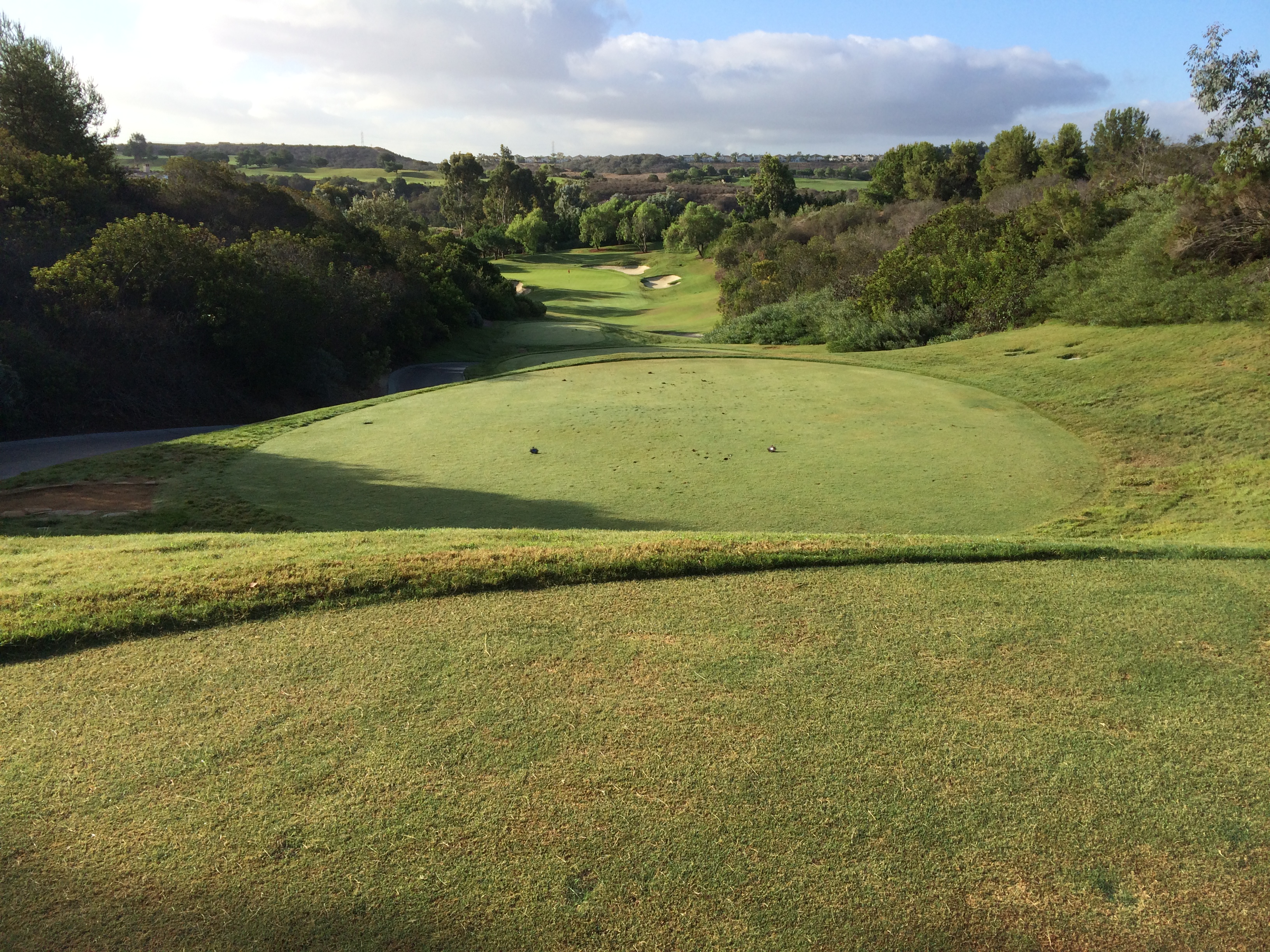 One of the Par 3s.  A lot of the holes were visually intimidating as per usual Fazio style.  If you hit it well the course was very approachable, but if you were spraying it an extra sleeve or two could come in handy.

Added to all of this learning, there was a third instructor there helping the Vision54 ladies and half way through the first day we learned that he was Tiger Woods’ first coach. He taught Tiger from the ages of 4-10.  Rudy had a lot of great experience and brought a ton to the table.  We really clicked and after the class on Saturday when Rudy followed along as a friend of mine Horacio, who was also attending the course, and I all went out to play some holes.  Mixing the Vision54 tools that we had worked on with the on-course playing suggestions that Rudy offered was revolutionary.  Rudy focusses his teaching on the course to be about playing the game and it was great to pick his brain about how to approach different holes and shots.  I learned a lot from him this past weekend and hope to keep that connection moving forward.  If he could help Tiger develop as a player I am certain that he could help all of us learn out there.

All of this was a great reminder of what it takes to play good golf today.  It’s not about what type of swing you need down the road, rather a way to truly learn how to use what you brought and love it no matter the outcome.

I have a lot to work on, but have been gathering more tools along the way to make sure each day is building forward momentum.  And, The last scoring round I shot before heading down there wasn’t too shabby, which is a good thought to keep in mind as I get back to work in Portland.  I shot a 73 with a rather nice looking back 9:

One more thing. Check out some of the fun filming that Golf Getaway and I did earlier in the summer while down in Australia: