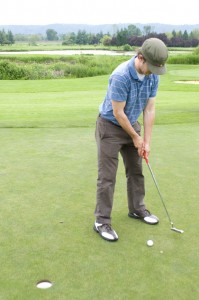 moving along in The Plan. Finally got the “okay” to move beyond these three footers and on to five foot putts.

It’s Sunday, my day of “rest,” and I found myself out at the course for a couple hours putting balls to make sure I was not too rusty come tomorrow morning.  Not sure if that makes me a obsessed, but it just felt good to get out for a bit on a day where I usually try and lay low to let my back and neck recover from soreness (something that as the weeks pass becomes less and less of an issue as the muscles strengthen).  I did a round of the ten foot game and one round of the brand new five foot putts, which CS and I decided to start doing last Thursday as it was time to move a bit further away from the hole.

The five footers are perhaps a bit too exciting in my mind, but it’s the first step of golfing progress of The Plan and to know that I’ve worked hard enough on one distance already to move along is exciting.  They also demand a completely different approach than the three footers.  In three feet, there is not much to account for outside of imperfections in the greens and an almost insignificant amount of slope, but the fiver’s cover enough distance to where the speed of the ball will change the amount that it curves on the slopes, as well as the bumps in the greens.  For example, if a green slopes left to right (meaning the ball will have a tendency to curve towards the right as it rolls) you can either putt it soft and let it curve quite a bit, or you can putt it swiftly and the ball will roll fairly straight regardless of the amount of slope.  The problem with hitting it too firmly is that if you miss, you can leave the ball further away beyond the hole than you started, and hitting too softly makes the angle especially tough to figure out..  So, there is a lot more to consider and it’s exciting to add these new dimensions into my daily game.

At this point, my daily average of the three footers was in the low 90 percents.  After the first three days of putting five footers, my average of those is more around the 55 percentile range.  Not quite sure what the goal will be for five footers, but if I progress like I did in the 3s, I would hope to be at least around the 80% range in the next few weeks, at which point I get to move out to about 8 feet..  Slowly creeping my way into actually playing a round of golf!  Perhaps as early as this winter I could be hitting on some par 3 courses.  Fingers crossed.