Yesterday I played 36 holes at Hilton Head Island’s Palmetto Dunes.  It had been about 16 months since my only other round there and this time I brought my own sticks.  I was pretty excited to see the Robert Trent Jones course again and get a glimpse of how I would play with golf clubs that I knew and trusted.

For some background on this course and what I am talking about, check out this post from November, 2012: http://thedanplan.com/trip-away-and-a-60th/

The gist is that I rented clubs to play this track and really struggled with lighter-weight regular flex shafts and hybrids up through the 7-iron.  Back then I shot around a 93 on the track from the white tees with a handful of balls hit OB.

Yesterday I was determined to improve upon that mark and despite arriving literally a minute before my tee time (got stuck in a long line buying some food for the day and seemed to hit every traffic light; even though I left 30 minutes early, by the time I checked in the two guys I was being paired with had already teed off and I had to scramble to catch them by the second hole.) I parred the first two holes and was off to a nice start on a beautiful day: 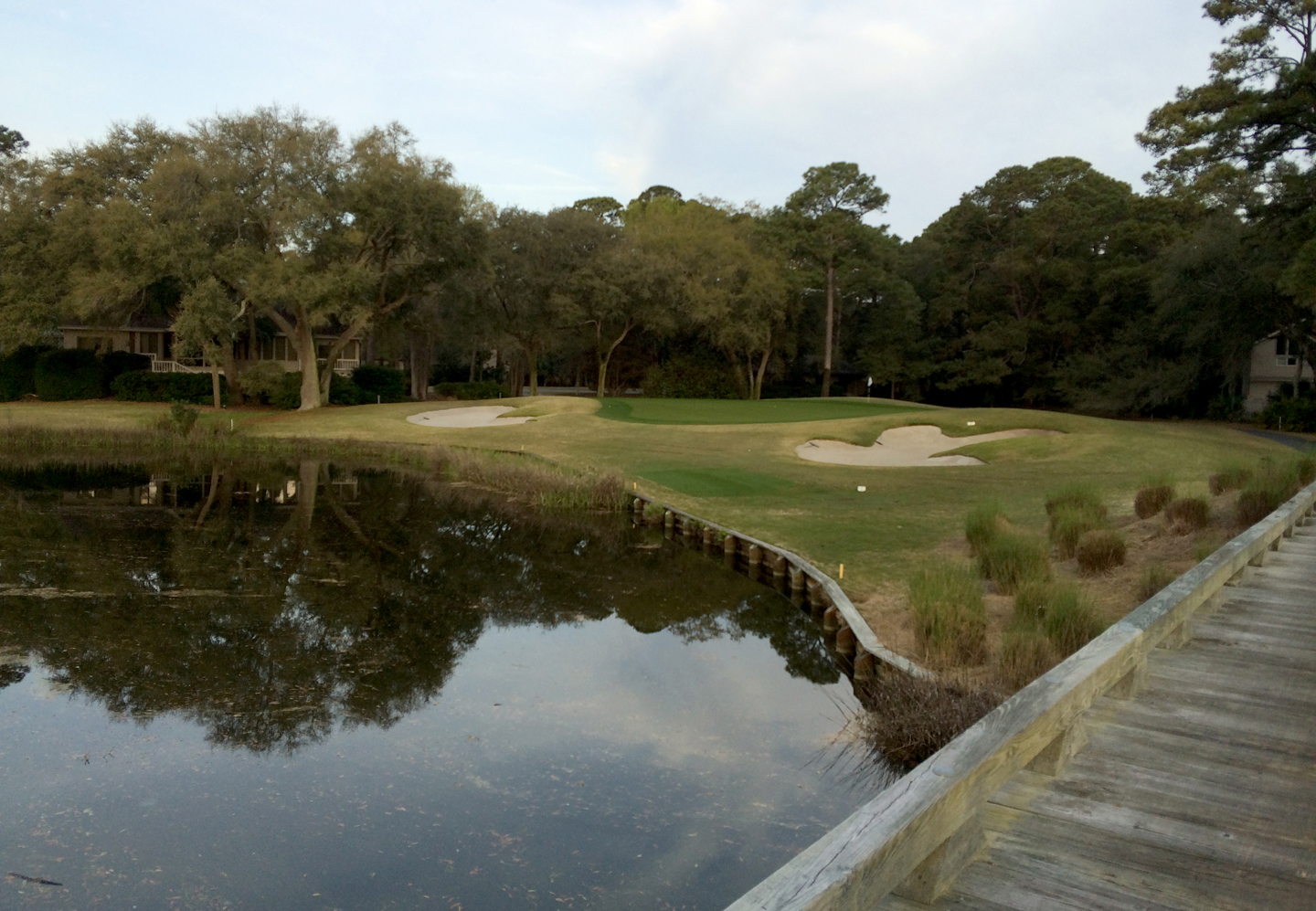 For the four three holes I used a 3-wood off the tee instead of pulling the driver.  The courses down here have fairways about as tight as back in Portland, but the difference is that on a lot of holes you have water or houses on both sides and in many cases it’s white stakes so a miss is very penalizing.  With the 3-wood I could get enough distance to have a mid or short iron in and without having hit any balls on the range before the round it was the safe bet.  I parred each of the first 4 in this manner including the 556 yard par 5 fourth hole.

After a silly 3-putt bogey on the par 3 5th I decided to pull driver on the 410 yard par 4 6th and pushed it OB into a white hazard and had to re tee.  Three holes later I pulled the driver again on a reachable-in-two par 5 and proceeded to pull it short into a bunker.  I managed to birdie that hole despite the efforts of my driver to get in the way.

At the turn I was remembering some thoughts I had over the past few days about making driver swings.  For some reason my confidence with the stick has never been good and when I stand over my tee shot I can’t see a clear picture of what I want to do with it.  Rather, I tend to hold on and just hope it doesn’t really screw up.  That’s no way to approach a golf shot and obviously I need to rethink my mental approach to that stick.  This is especially prevalent when I am playing a new course for the first time or there is a tight hole with OB on both sides, which just adds to the difficulty of the situation.

I tried to just relax and make easier swings through the round and ended up hitting some good drives, but there seemed to be two results from hitting the driver:  straight down the middle or OB either left or right.  With any other club my miss tends to self correct somewhat and worst case scenario I am a little short and in the rough.  That’s where I want to get with the driver.

The funny thing is that I can hit that club over and over on the range (not too uncommon to hit it well on the range and then struggle on the course) so to me it definitely means it’s a confidence and relaxation issue.

My goal now is to find a pre-shot routine and mental queue to keep me relaxed and swinging smoothly.

Back to the rounds:

I finished the Trent Jones course with a 78 on the day.  On the back I had two birdies including a two putt from this par 5 that I hit in two.  Wasn’t exactly the shortest eagle putt possible… 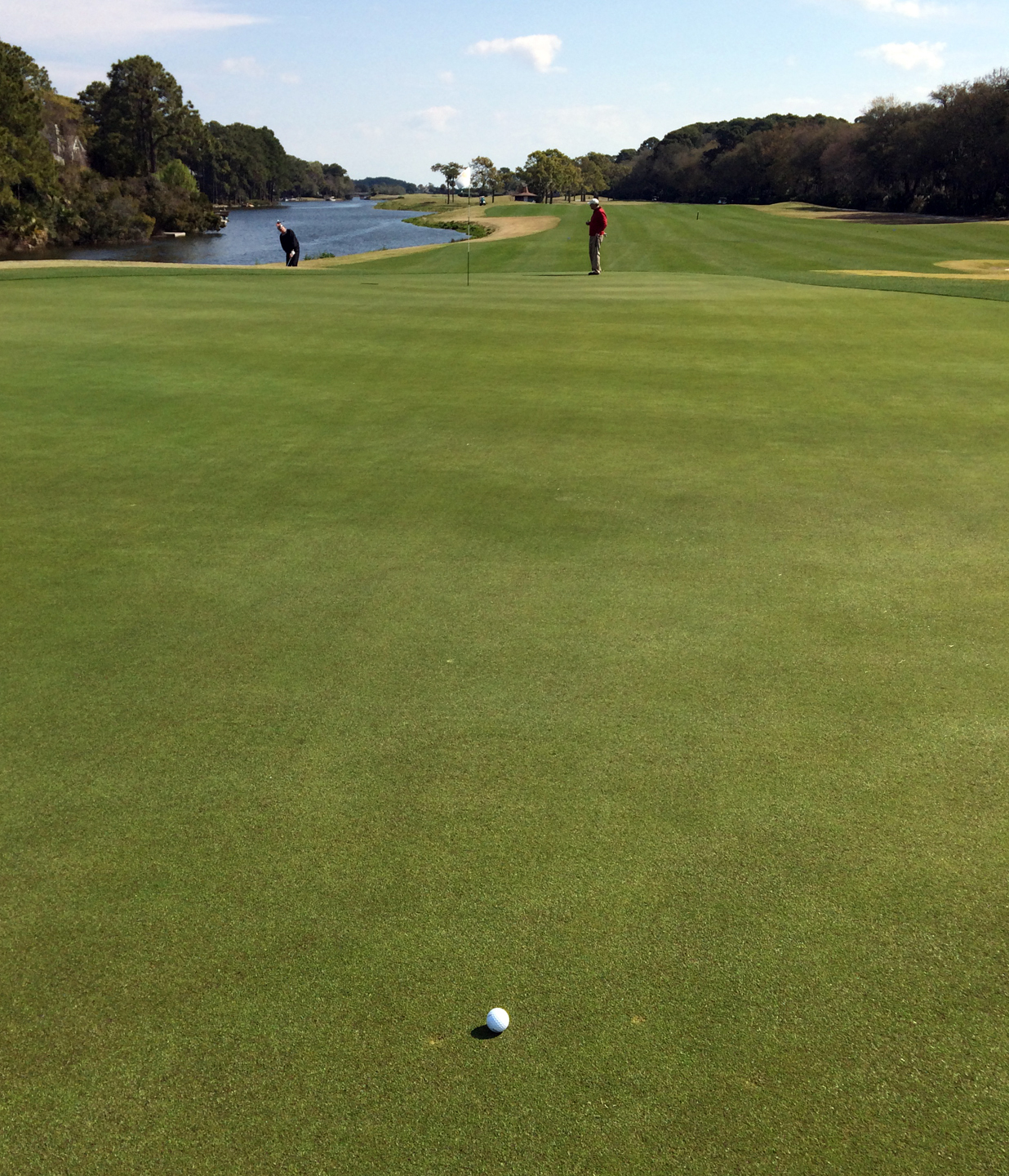 I also had a decent birdie look on the signature hole: 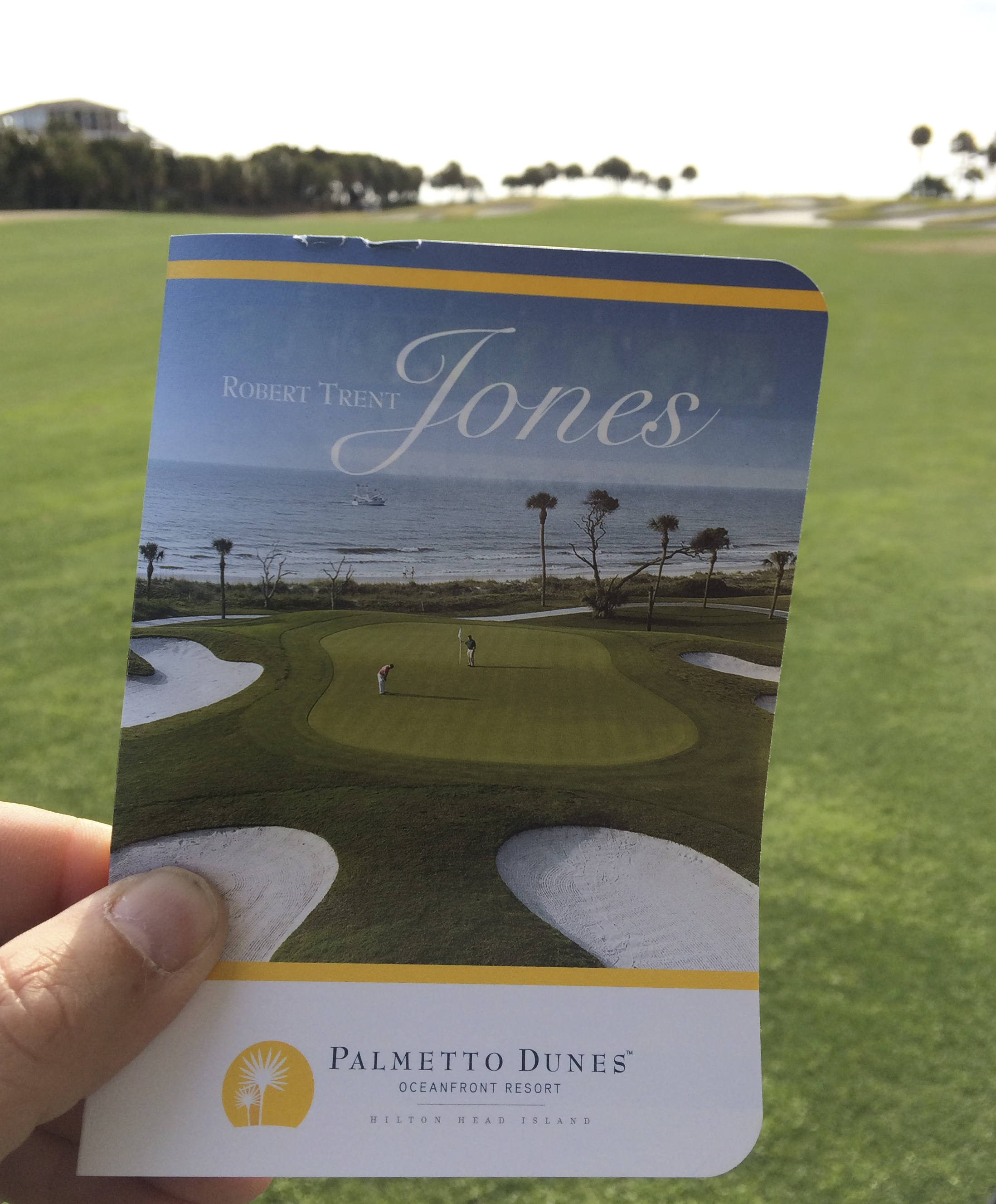 All in all it felt good to shoot a better score.  The driver cost me two direct strokes on the front and at least one on the back, but I tried to make up for it by hitting some greens and making a couple birds.  I suppose I will have to come back this Fall and best this round.

Afterwords I was feeling like continuing and it was only noon so I headed over to the Fazio course and got a replay rate round in.  The guy in the shop said they didn’t over-seed this year so it was a little brown in spots, but that seems natural to me. 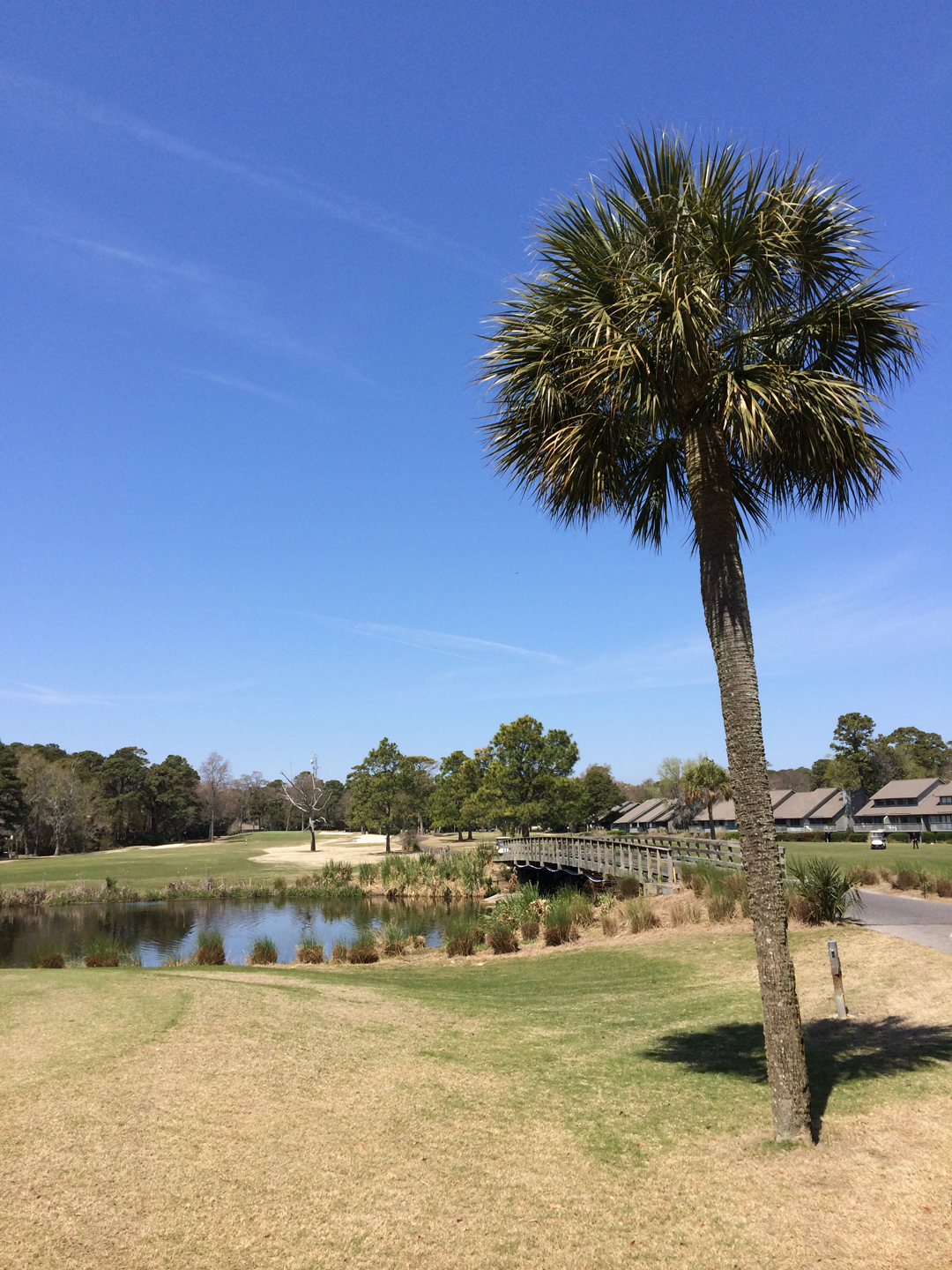 The course was a completely different type of challenge.  Whereas the Jones course was tough to drive, the Fazio was harder to stick the greens.  It is a par 70 that had a lot of long par 4s and when they were playing into the wind it was quite the challenge.  The wind had picked up a lot from the morning and was steady at 15-20mph with heavier gusts.  This added to the list of difficulties of a course designed to protect the greens.

There was a lot less water and the fairways were more open, but the greens seemed smaller, firmer and had more bunker play around them.  All in all it was a blast of a course and I would love to go back and play it again now that I have a feel for where to hit the ball on most of the holes.  I didn’t shoot very well and carded an 80 for the round, but some of that was due to fading at the end of the round and some to playing a course without any knowledge of the layout.

It was a great day all around.  At times I got a little “concerned” with my driver play, but that just means it is something I need to continue to focus on.  Good news is that I finally got to play some firm fairways and when I hit the ball well I was getting around 300 yard drives.  That’s nice to know as in Portland everything is still plugging and it’s hard to judge driving distances when the ball either sticks in the soggy fairway or actually rolls backwards upon impact.

I have a few more days to explore Hilton Head golf and then am heading back to Portland this coming Tuesday.  It’s been a great trip so far and I am excited to continue to push forward.  The half way mark is just around the corner, too..

4 Responses to "An old fashioned Hilton Head redemption round"