I went to Hilton Head Island this week to gather with my family and celebrate my mother’s 60th birthday. While there I took my mom, brother and girlfriend (Mary) out for a round of golf where I was hoping to demonstrate some of the things I had been working on for the past two plus years.

Plans and expectations never seem to work out as hoped, though.. 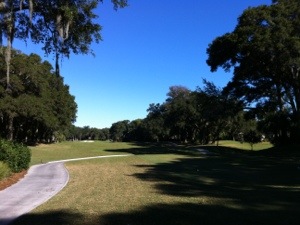 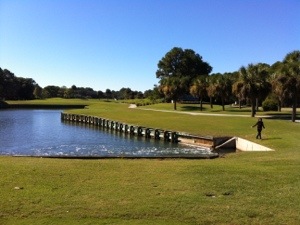 Basically, everything was different than teeing it up in Portland, which was a great thing, although there was one difference which was a killer.

Clubs. At the last minute I decided not to bring my golf clubs because of cost. It was going to be $50 round trip to check them and we would have had to take a cab to the airport as it was raining and a bit too far to walk to the train with them, so that would be another 50 round trip. I decided it made more sense to rent clubs while on the island. What I didn’t think about was the type of clubs you get when you rent, especially when you rent a left handed set. 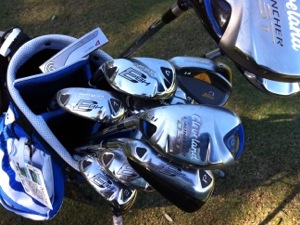 It was pretty eye-opening. I don’t want to go into too many specifics about the gear, but for the golfers out there I will say that the driver had a 44 gram regular flex shaft in it that felt like a noodle no matter how slow I swang the club. Controlling the ball was a tough test and made the round quite a fun challenge. The irons matched the driver in that they had flexible shafts and were hybrids all the way down to the 9-iron. Definitely different to hit than stiff flex blades and I wish I had brought my own sticks as the goal was to show my family what I had been working on for the past 2.5 years.

I actually had nightmares from the experience. The night after the round I dreamt I couldn’t hit a golf ball. No matter what anyone said or how hard I tried I couldn’t manage to make contact and the club kept snapping around the ball. Quite an unpleasant experience.

The last time my brother and I played golf was a par 3 course in Omaha, Nebraska where I decided to start this project. It was back in June of 2009 and after the round (on my 30th birthday) we talked about “talent” versus “practice” and I made up my mind to test what was possible in life through putting in 10,000 hours of deliberate practice. At that time my entire experience in the realm of golf was about 5 outtings with my brother on 9-hole par 3 courses. Total.

Fast-forward to the present and I wanted to show off what 3,400 hours of practice looks like. I got a chance to do that in that I gave him 2 strokes per hole in match play and we kept it close all day, whereas in the past he would have beat me outright without any strokes. But, it was disappointing to not play at my fullest level.

Things happen, though, and the important part was that everyone had a great time. I was the only one who noticed the impact of the rental clubs and at the end of the day we all walked away happy. Despite the gear I still shot in the low 90s which is probably 40 strokes better than I would have 3 years ago.

It was a great course and a good day and I am so happy to have gotten the chance to spend my mother’s birthday with her. 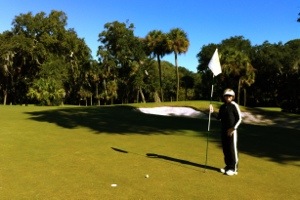 The only other event from the week away was that I left my laptop on the first flight from Portland to Chicago. Not sure how I managed to pull that off, but when we were waiting for our connecting flight (which got canceled so we stayed the night in Chicago) I realized that I didn’t have it with me. I don’t usually leave stuff behind and a computer is huge, especially as it has all of my daily Dan Plan diary notes on it as well as a ton of data from the project, so I couldn’t afford to lose it. After calling the lost luggage number twice a day for three days a random call came in from Denver. It was a flight attendant who had found a business card in my laptop case and had the computer with him. Mary’s parents live in Denver and met up with the flight attendant and are mailing the machine back to Portland as I type.

Definitely learned my lesson here, both to be more aware of my things and to always back up the laptop. The flight attendant wouldn’t take any reward and said instead to pass the favor along the next time I have the chance to do the right thing. I planned on doing the right thing regardless but now will be looking for an excuse to go the extra mile and make sure his favor is continued forward.

I’m so happy that there are good people in this world.